David and I don’t usually do much on our anniversaries.  Most years, our anniversary meant a simple dinner out and seeing a movie together. Some years, especially in the beginning, we didn’t go out at all.

When we started talking about our 25th wedding anniversary, we originally talked about going on our 1st cruise. Being married for 25 years needed something big, right? Everyone we talked to seemed to agree. “You have to do something very special”, they would say. But, weren’t feeling it. Not to mention, money matters had us deciding that it would be best to wait for a cruise.

We figured we would just stick with the usual: for a nice dinner and a movie.

That is, until I had an idea: we need to see our first Los Angeles Dodgers game together. 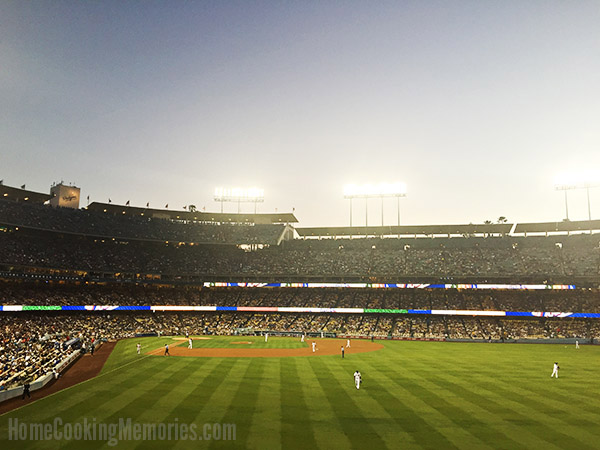 David is a lifelong Dodger fan. It’s his #1 team out of all baseball and out of any sport. When he was younger, living not far from Dodger Stadium, he went to games fairly frequently. But as a married guy, not so much. In our 25 years of marriage, he had only been to two Dodgers games – once in 1999 and once in 2000. I had never been to a Dodgers game. And we had never been to one together.

I decided THIS would be our perfect 25th wedding anniversary. Not a cruise, not a fancy dinner out. Us, at a Dodgers game, eating Dodger dogs and peanuts. Wearing matching Kershaw t-shirts. Truly, this fit us perfectly.

I told him my plan and I instantly became the best wife in the world. We looked at the schedule and bought our Dodgers tickets. The major bonus for us is that the Dodgers would be playing the Washington Nationals. My dad was a lifelong Dodgers fan, but when he moved across county, he started attending Nationals games with his friends from work. So, while we’d be rooting for the Dodgers, it was nice that they would be playing the Nationals of all the teams they could have been playing. 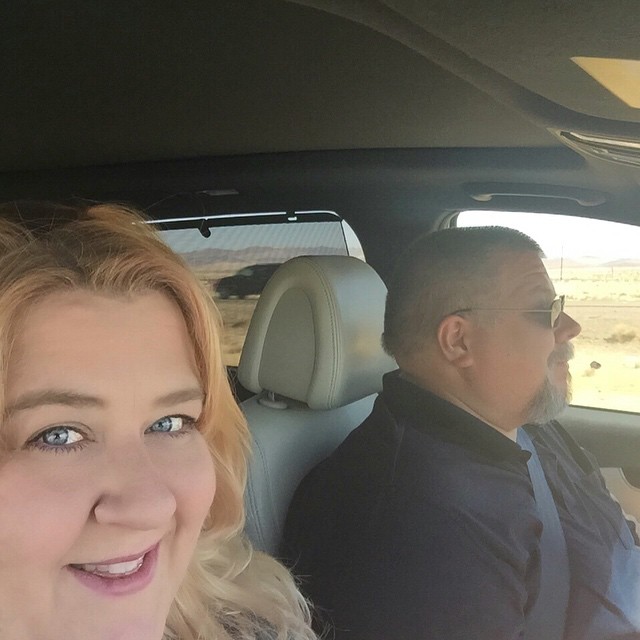 With our tickets bought, and hotel reservation made, I decided to make the trip even better. I made arrangements to take a week long test drive of a 2016 Kia Sorento. Yeah, we like our van, but driving a brand new, Kia sounded A LOT better. 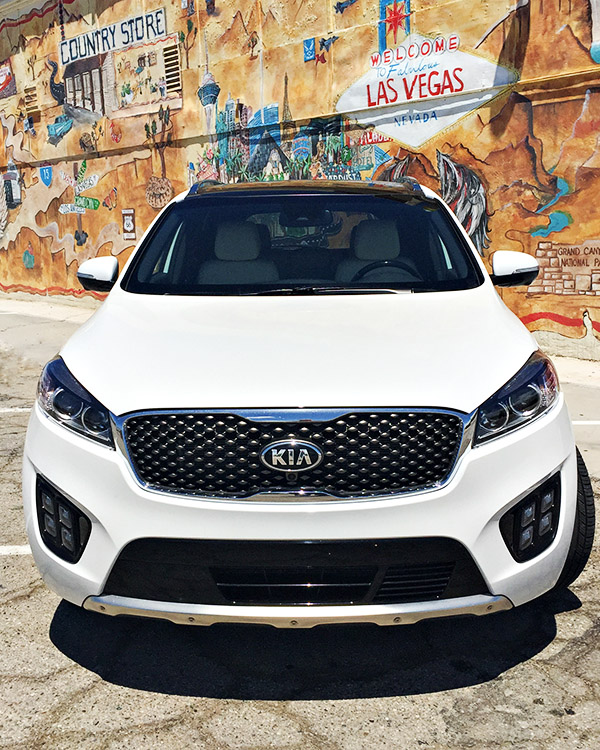 And, then, we hit the desert road to California. 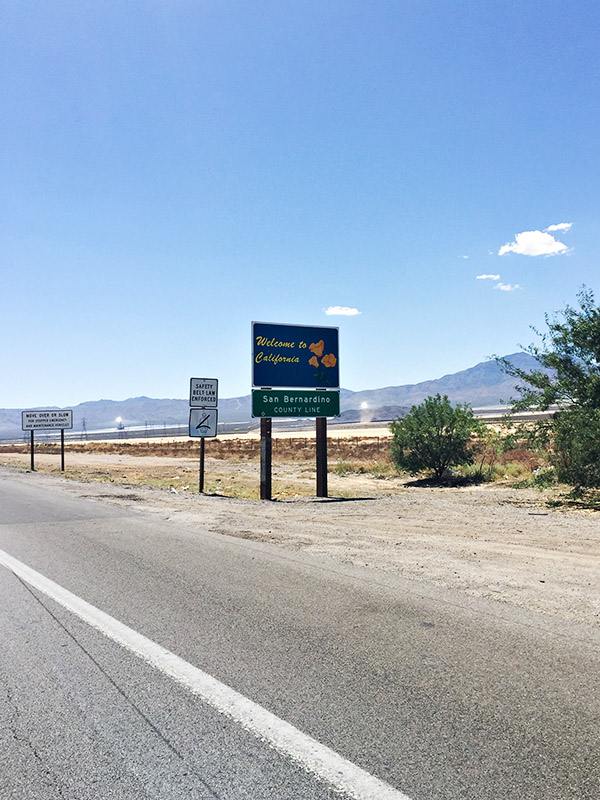 We hit lots of traffic and construction on the road from Vegas to Los Angeles. We had planned to go to our hotel first, but there wasn’t a moment to spare so we drove straight to Dodger Stadium. I still didn’t have my Dodgers shirt on, so I did a quick and discreet t-shirt change in the parking lot. Our parking spot felt like furthest point from where we need to be (right field).

BUT, it was great view of the downtown Los Angeles skyline. 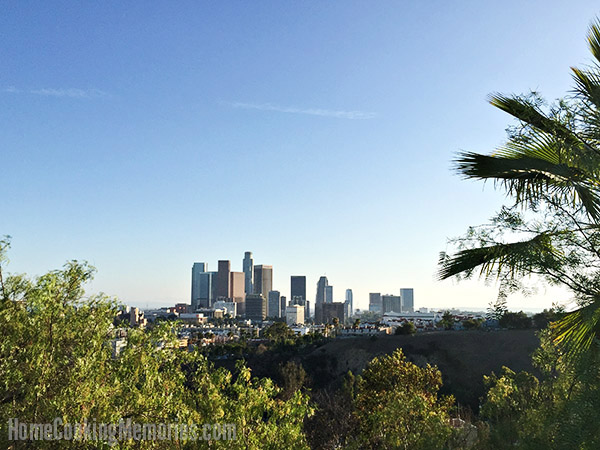 David has wanted to sit in right field ever since Dodgers Stadium started their Coca Cola All You Can Eat Right Field Pavilion. We bought those tickets, so that gave us unlimited Dodger Dogs, nachos, popcorn, peanuts, Coke products and water while we were at the game. The game was getting ready to start, so after parking, we hurried towards the right field gates and once inside, we grabbed some Dodger Dogs, nachos, peanuts, and soda. 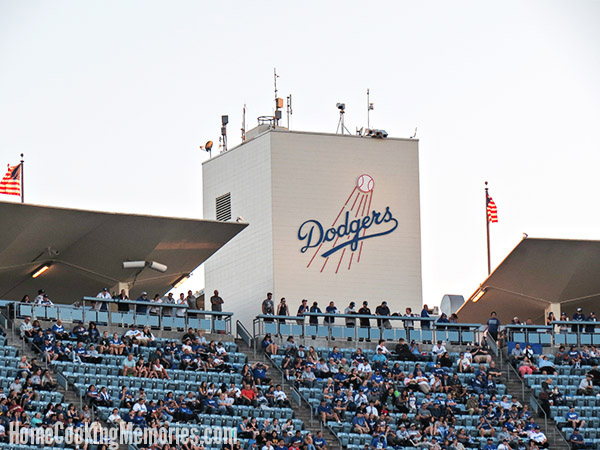 David carried our drinks, I carried our food, and between the two of us, we carried everything else – camera, purse. etc. With our hands full, we headed up to our seats and sat down.

I looked around and I was in awe of it all. I had been to 2 Los Angeles Angels games (well, Anaheim Angels, back then), but being married to a die-hard Dodgers fan for 25 years, I had seen and heard a LOT more Dodgers games on TV and radio. Being there was unreal to me. David was excited to be there, but I was freaking out a bit. Well, maybe a lot. 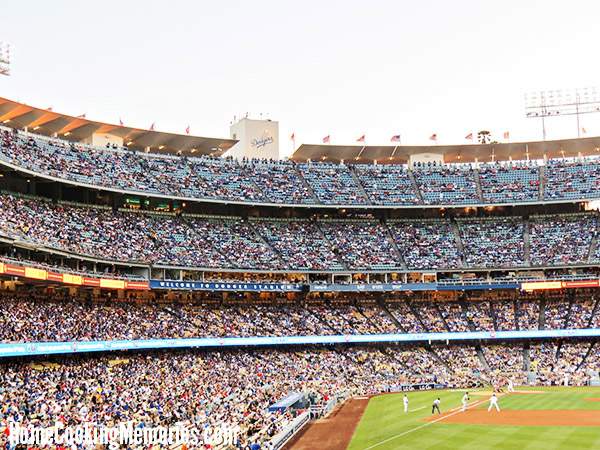 As we continued getting situated in our seats, I handed David his food, he handed me a drink and I noticed that the cheese sauce smell was rather strong. It was then that realized that I have completely dumped one of the nacho cheese trays over and onto my shirt. And, in my hair. A glob of it the same of my hand. I think usually I would have been mortified, but I was so happy that I was there, I just cleaned it up the best I could and enjoyed the game. 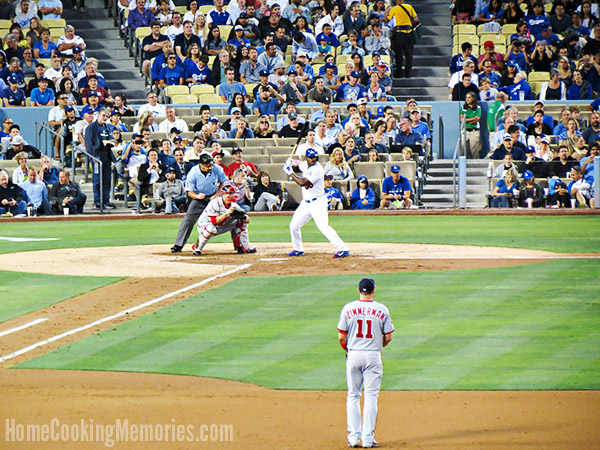 While we did enjoy the game, it wasn’t the best game for the Dodgers. No runs for the Dodgers until the 9th inning — where they final got 3 runs in. And one of the home runs was hit to the right of us, into the stands. The win went to the Nationals with a final score of 8 – 3. 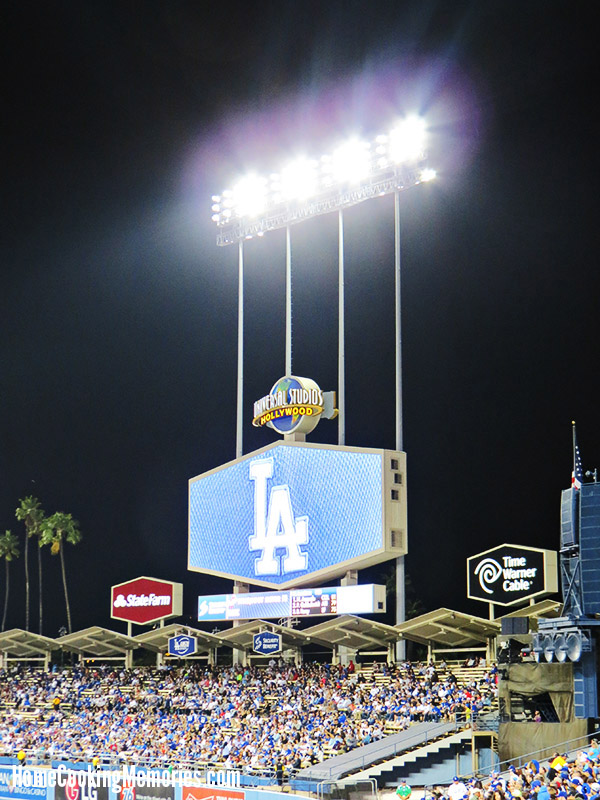 Oh, and check out the collectors pin we got at the game: Cy Young Award Winners Collectors’ Pin Series — Fernando Valenzuela. No, we’re not related, but we do get asked that more times than you could ever believe. 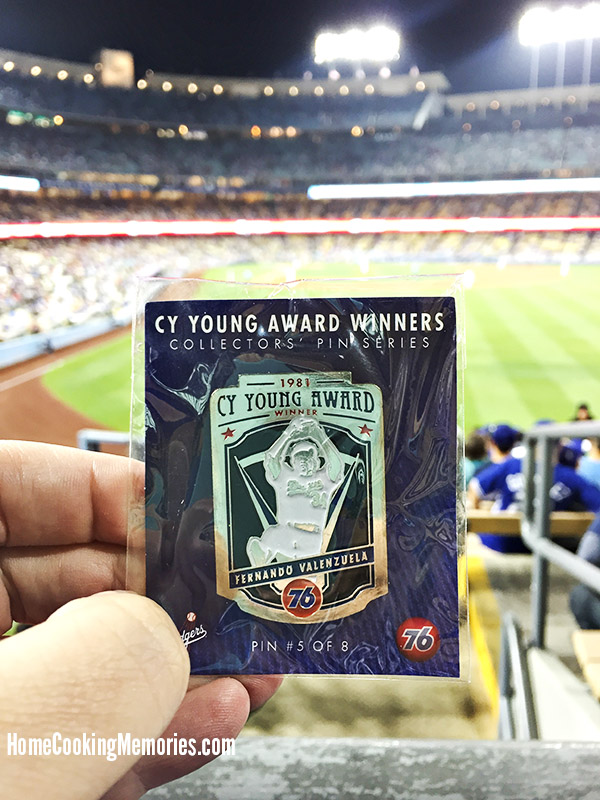 The Dodgers lost, I had crunchy nacho cheese hair, and I wore a stinky nacho cheese Kershaw t-shirt all night but, to me, the night was perfect. After 25 years of marriage, it was about time we enjoyed a Dodgers game together. 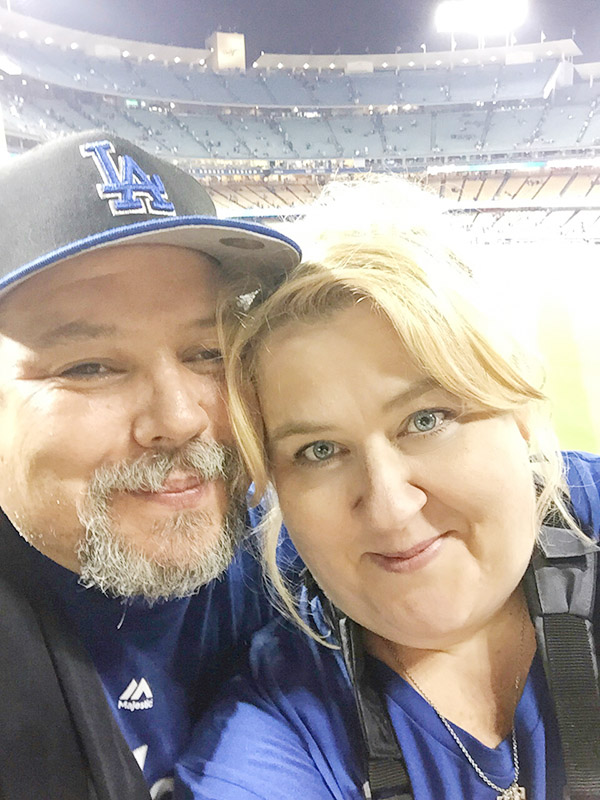 While the Dodger game was the highlight of our anniversary road trip, we did have fun doing a few other things. One stop was to the Daiso Japan store. I had read about Daiso on someone’s blog I stumbled upon and when I realized that Southern California had several locations, I just had to stop in. Basically, they are a Japanese dollar store (but everything is $1.50). 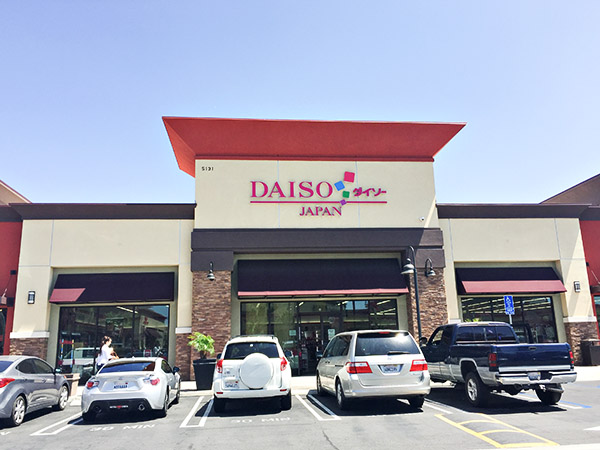 I’ll be sharing a post of our trip there, but I mostly bought craft supplies, notebooks & office supplies, and snacks. Lots of cute things. Too bad we don’t have a Daiso in Vegas (but, then again, that’s probably a good thing for my wallet). 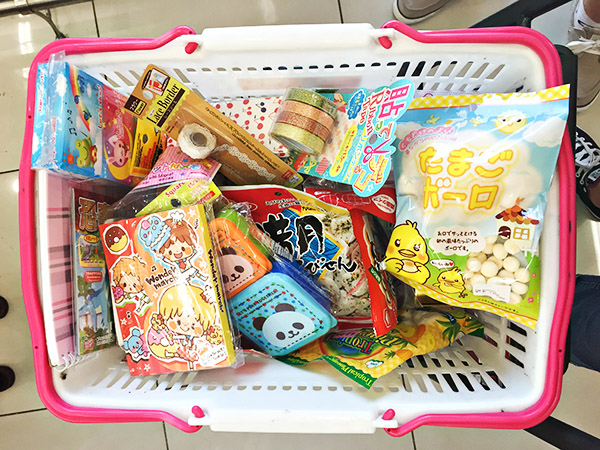 After Daiso, we spent most of our day driving Pacific Coast Highway. While we’ve both driven on PCH here and there, we haven’t driven it for a long period of time. But with having the Kia Sorento, we thought this was a perfect opportunity to take the scenic route. 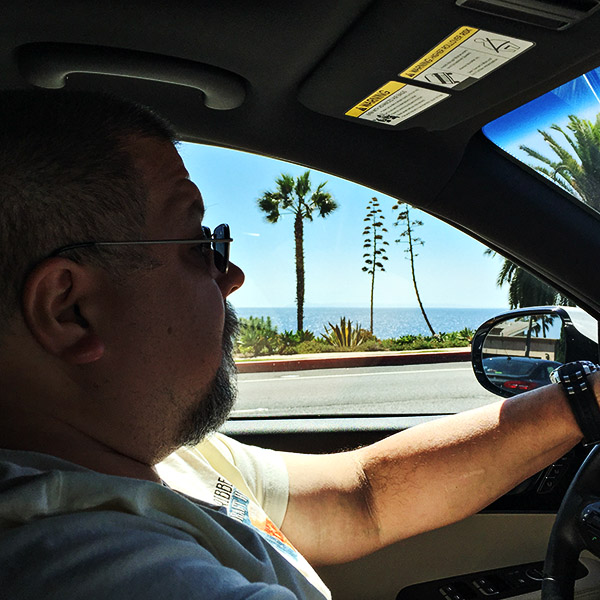 The views were just so beautiful. We enjoy our short road trip along Pacific Coast Highway so much that we’re planning a trip back, but more north. 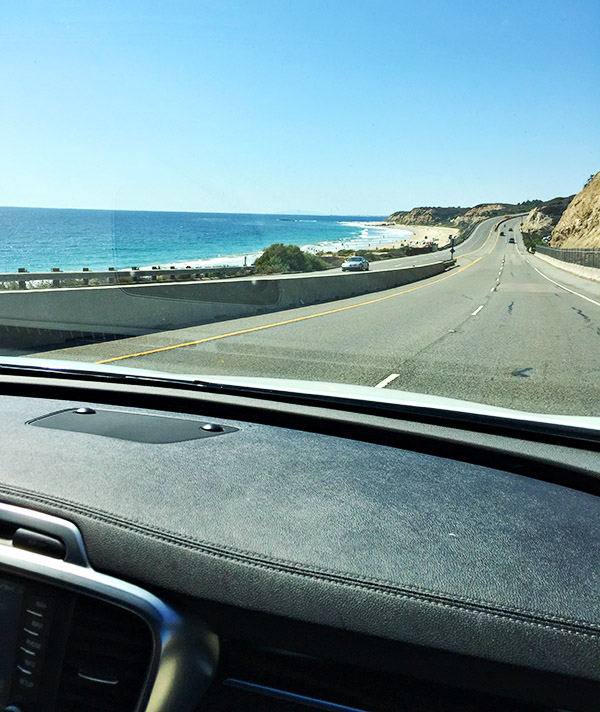 Remember how I said we’re simple, laid-back sort of people? We decided that our anniversary dinner wasn’t going to be any fancy place. We knew that we wanted some sort of seafood, and by chance, we came across a restaurant called Pier 76 Fish Grill in Long Beach. I found it on Yelp and everyone was raving about it, so we decided to head there to enjoy our dinner. I’ll be posting about Pier 76 Fish Grill more in depth, but I can tell you right now that the reviews on Yelp were spot on. We both ordered Lobster Roll, but also decided to split an order of their Fish Tacos. OH MY. SO GOOD. 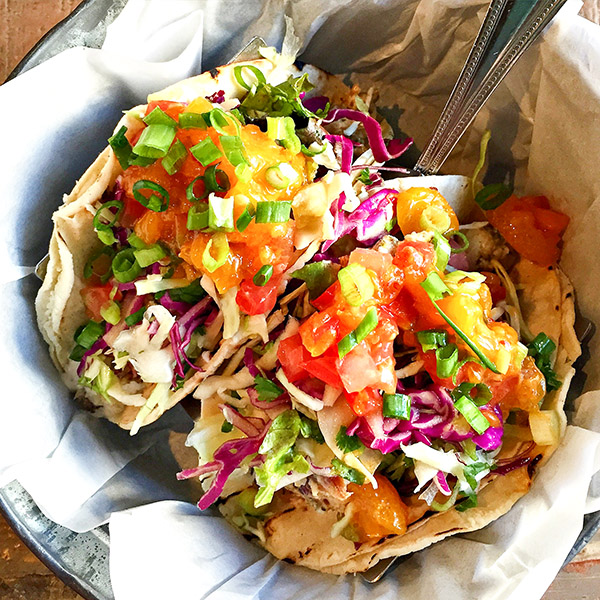 I know there are some people that we know personally who encouraged us to do something BIG for our anniversary. And for a while there, I was feeling this pressure that we should make our anniversary more extravagant. But this little road trip — with baseball, all-you-can-eat Dodger Dogs, nacho cheese accidents, a Japanese dollar store, driving along the California beaches, fish tacos, and watching Furious 7 in our hotel room bed (ooops, forget to mention that one) was pure David & Brandie perfection. That’s us — and I imagine that will be us for the next 25 years too.

Disclosure: With thanks to Kia, we were provided with the 2014 Kia Sorento that you see in this post for a week long test drive. Read more about our test drive experience in the 2016 Kia Sorento.