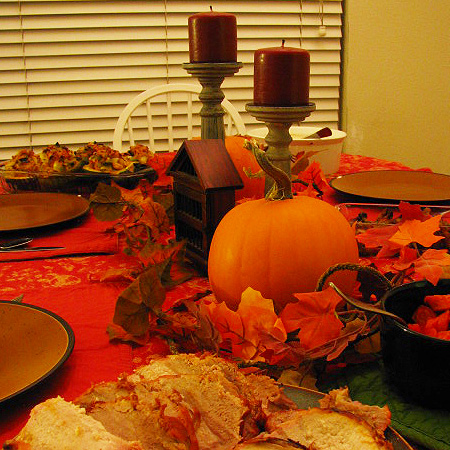 On Friday, I was absolutely thrilled to find out I was one of 200 contestants who made it to Round 3 of Project Food Blog.

My husband says he knew that I would make it (he’s awesome like that). I wasn’t so sure. I know that I probably shouldn’t say that. I should be super positive and be my own biggest cheerleader, but honestly, I was expecting to get a “thanks, but no thanks” letter.

I am so very grateful and I appreciate every single one of you who took the time to vote for me. I’m VERY happy and SOOO excited that I have the opportunity to participate in Round 3 – Luxury Dinner Party.

I’m sure I won’t be the only contestant to say this, but “luxury” isn’t really part of my life. It’s just not a word that I would use to define any part of my cooking, my home, or my lifestyle. We are simple, no-frills type people.

So, instead of thinking of more ways that I am the opposite of “luxury”, I looked up the definition and this is what stood out to me: “a pleasure out of the ordinary allowed to oneself”. Well, I can do that! That’s all you had to say! 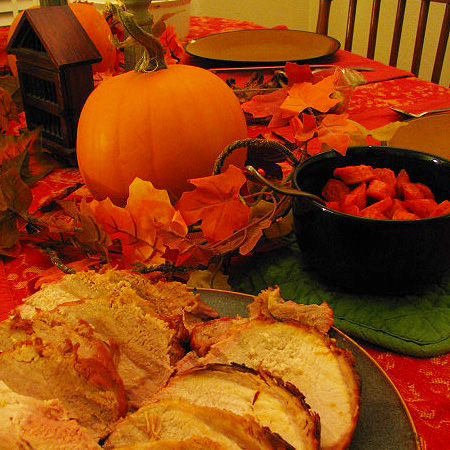 So, I thought long and hard and came up with the plans for my luxury dinner party. Here’s how I came up with my plan:

1. Being a huge fan of cooking shows, I’ve seen many luxurious dishes made on TV, but haven’t eaten very many of them. So, I decided to take one of my favorite shows, Iron Chef, and use their tried-and-true technique: one ingredient prepared in different ways. I checked the sales ad for one of my local grocery stores and saw that Smith’s had all their apples on sale for .69 cents per pound. The decision was made – apples would be my secret ingredient.

2. I would use the dinner party as an excuse to celebrate my favorite season – Autumn. And, I would now be forced to find the rest of my Autumn decorations that have been hiding since our cross-country move.

3. My dinner party would consist of some of the important guests that I know of – my husband and our three children: Wellie (age 20), D (age 18), and Mattie (age 9). They deserve a dinner party more than anyone I know and it would be a pleasure to have them as my guests.

4. The menu would feature some new recipes, stuff that I don’t normally make. But they must be family-friendly and something my guests would love to eat. Also, being on a limited budget, I didn’t want to prepare a meal that no one would eat. Wasting food = wasting money and that doesn’t work for me.

5. If an item on my menu was considered standard fare (like mashed potatoes), I would give it the luxury factor by doing something with it that is unique and different for our family. Something to make it extra special, which might mean more calories but I will refer back to the definition of “out of the ordinary” (this is not the time to use non-fat milk instead of heavy cream).

6. I would use what I have and make it work when it came to plate settings and decor, but I would do my best to use these old things in a new way.

My menu planning was fairly easy because of two things. First, I had picked the overall theme of Autumn, so this narrowed things down quite a bit. Second, I had picked an ingredient (apples) that I wanted to build my menu around. Once I had these things in mind, I was able to guide my planning to focus on Autumn and apples, which made things much more simple. You should try it – it makes things easy as pie.

Here was our menu: 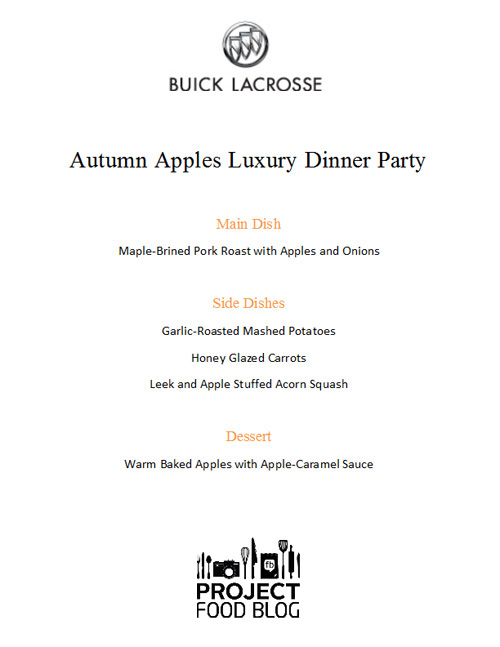 I decorated the table with a combination of Autumn decorations and other items from around my house, such as the candlesticks and the birdhouse. The real pumpkins were bought last week at the local dollar store (for $1 each). The table cloth was picked up at a thrift store last month for just $2. The fabric placemats are Autumn themed that I also picked up at the thrift store ($1.50 for 6 of them). I found the pattern on them to be too busy on my tablecloth, so I turned them over and used the backs of them. 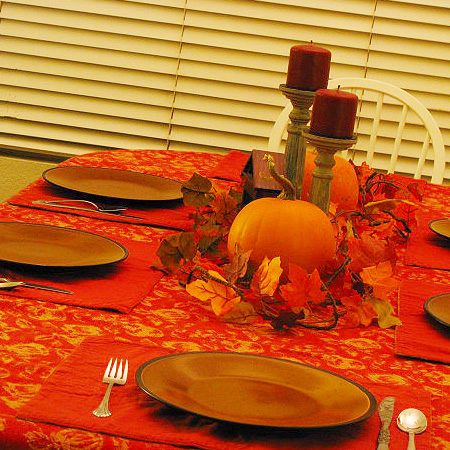 I’ve never cooked a pork loin roast before, so maybe they are just yummy to begin with, but this particular recipe was AMAZINGLY delicious, which I think was mostly due to the brine and the glaze. I made this recipe: Maple-Brined Pork Roast with Apples, Onions, and Mustard Breadcrumbs (minus the breadcrumbs part). 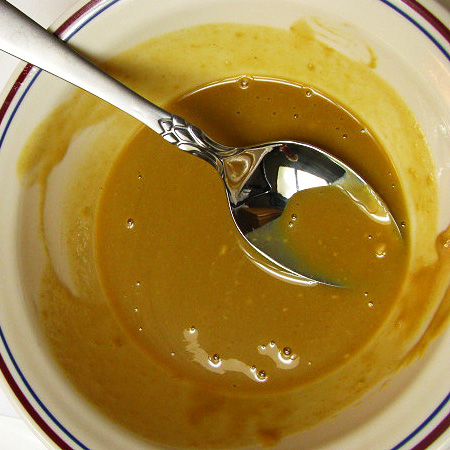 The apples and onions with the pork roast burned, though, so that was a complete failure. I’m not sure what I did wrong, but they just didn’t stand up to the 2 hours of roasting that was needed. The scooped up what I could (which wasn’t much), and the kids cautiously asked me “what’s this?”, to which I responded “horribly burned apples and onions – you don’t have to eat them.” They were noticeably relieved. 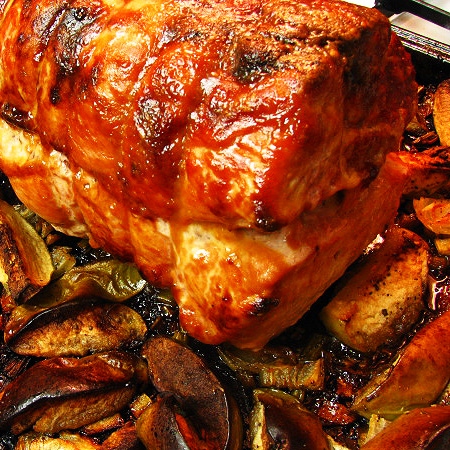 (yeah, this photos isn’t the greatest, is it? But I just had to show you the burnt apples and onions.)

Here’s a better photo of the pork loin roast – not so scary without all the burnt stuff: 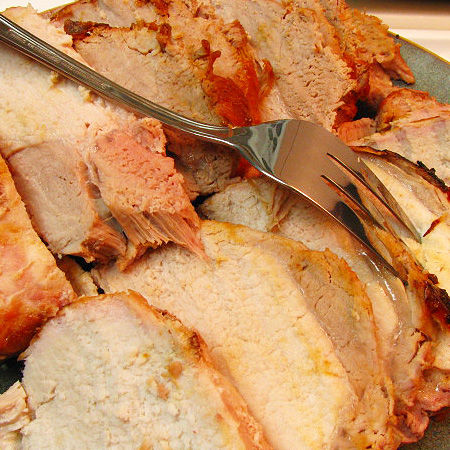 For my first time ever, I roasted garlic (it’s so easy!) and added it to my mashed potatoes, which I used heavy cream in. Normally, I would make them with non-fat milk, but I went all out. I even used plenty of butter. I don’t even have to tell you that these were good, do I? 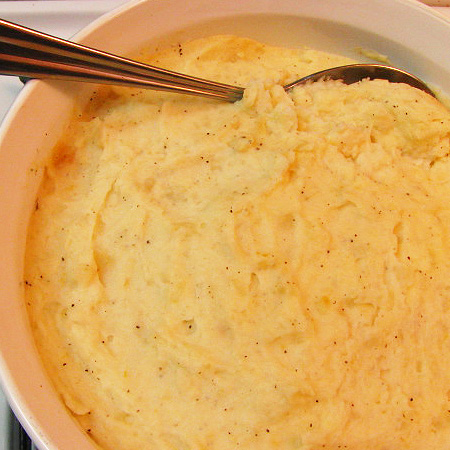 I’ve made a sweet carrot side dish before by adding just some brown sugar and a bit of butter to carrots, but this time I followed a Martha Stewart Honey Glazed Carrots recipe and the result was these beautiful little treats. They were sweet, and well, just perfect. 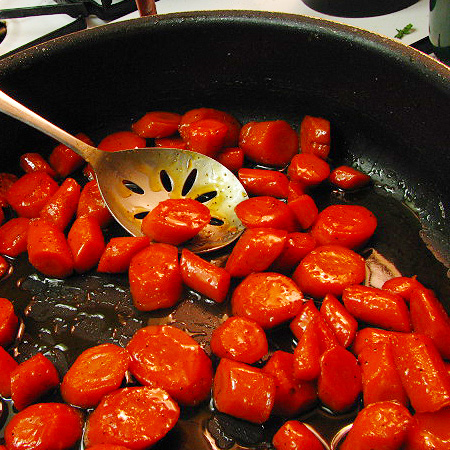 Last week in my food co-op basket, I received acorn squash. I’ve never cooked them before, but once I decided that I was going to focus on apples for this part, I knew that I would stuff the acorn squash with an apple stuffing. I love the look of these almost as much as I love the taste. 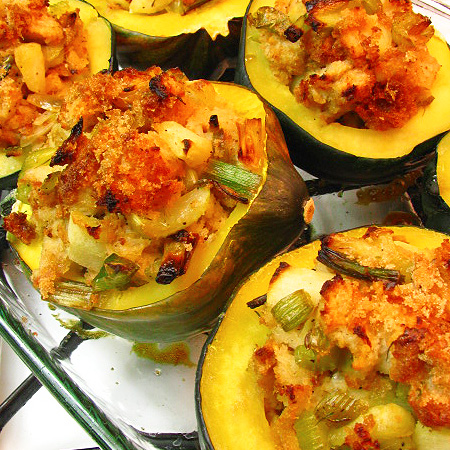 For dessert, of course, we had to have something with apples. I considered making an apple tart, but I wanted something that was extremely frugal, so I went with baked apples. I made a caramel sauce, which we drizzled over the cooked apples and topped each one with homemade whipped cream. These were heavenly! 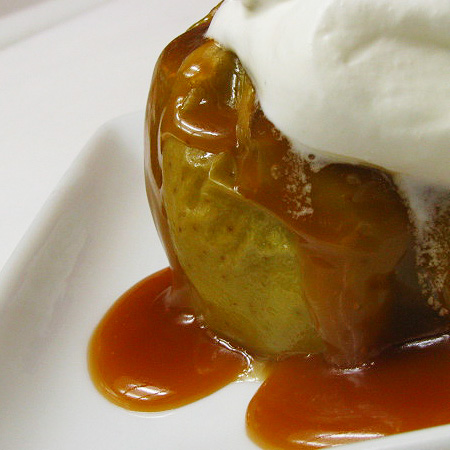 Since our move, we’ve been gradually getting new items for our home, mostly through Craigslist and Freecyle. We got this great table from another family on Freecyle, but we don’t have enough chairs yet. So, I set the table and we dished up our plates, buffet style. 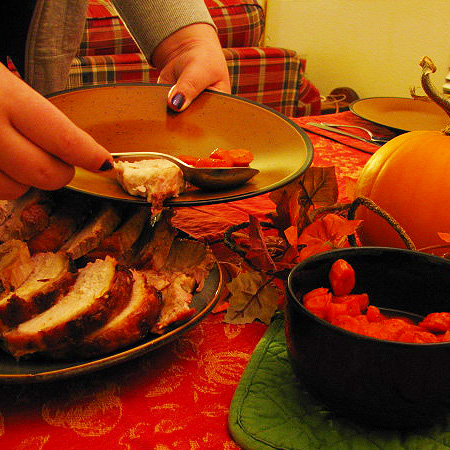 Mattie wanted in on the photo action: 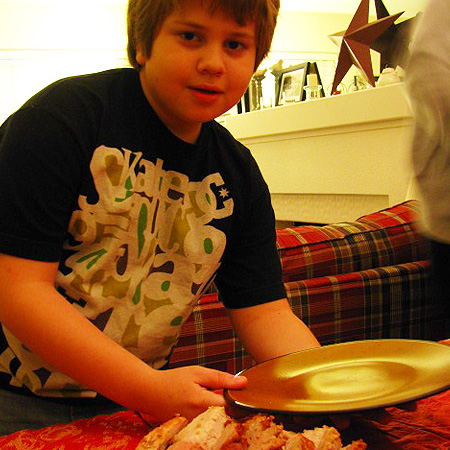 We enjoyed our Autumn Apple luxury dinner in a very non-luxury way – in our living room. On our laps. (Just keepin’ it real, ya know?) 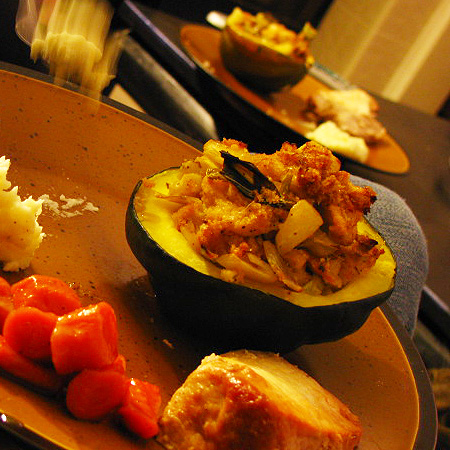 I have to say that this is the stuff that memories are made of. It was so much fun picking a theme and going with it. I’ve never really done that with a dinner, so while perhaps not as luxurious as some meals could be, it was definitely fancy stuff for our family. I hope I have inspired another family to do the same thing – pick a theme – any theme – and build a menu around it. It’s a fun way to liven up your family dinners.

I’ll be sharing the recipes for my Autumn Apple Dinner Party soon – as well as more photos (gosh, I took SO many!), so stayed tuned to future blog posts. If you subscribe to my RSS feed or click to follow me (on the right side of my blog), you won’t miss a thing.

Voting should be opening soon for Round # 3 of Project Food Blog – if you like my post, I hope you’ll consider voting for me!