I’ve been quite interested in the method of weighing ingredients for baking…rather than measuring with cups. Every time I stumble onto an article about why it’s better to weigh your ingredients, I always stop and devour the information. It makes perfect sense to me. If you tell two people to give you 1 cup of flour, and then you weigh their flour, you would most likely find a big difference in the amounts. Being precise in baking is important and if you use too much, or too little, of an ingredient, the results can be different and not always in a good way.

Until recently, I had not baked by weighing only. If I found a recipe that only listed the ingredients by weight, I would have passed it up and looked for something else. But the more I learned, the more I wanted to try weighing my ingredients. I wanted to see if it made a difference and if it was easy to do.

So, I decided to make cookies — without measuring cups. I chose a classic chocolate chip cookie recipe that had the ingredients already listed by weight. The recipe I choose was by Eric Wolitzky from Top Chef: Just Dessert (season 1).

Of course, if you are going to weight ingredients, you need a scale. I have an inexpensive kitchen scale and it works just fine for me. I bought it at Walmart for less than $20 for the purpose of keeping watching on my meal portion sizes. 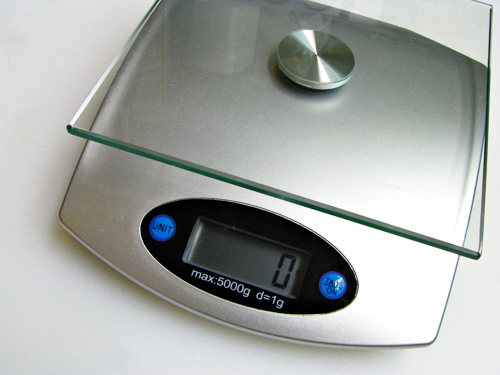 One of the things I didn’t understand when first getting my scale was how to have it weigh just the food and not the container I was using. Probably common knowledge to lots of people, but I was a total newbie to this food scale thing, so I had no clue. But, it’s super easy. When my scale is powered on, I place my container on the scale. Then, I hit the “tare” button on the scale and that cancels out the weight of the container, setting it back to 0.

Another way of discounting the “container” weight it to put it on the scale while it is off, and then power on. My scale will still be at 0, as if there is nothing on it. Read your manual though, because other scales could work differently. 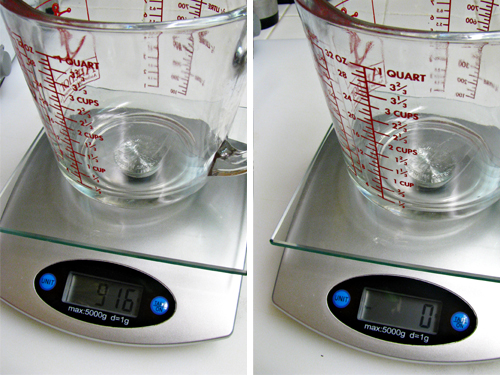 After I have my container  zeroed on my scale, I can add my ingredients to it. For my first ingredient, I needed to melt 340 grams of butter. I unwrapped several cubes of butter and placed them in my glass Pyrex measuring cup. When I had the measurement perfect, I melted the butter and let it cool. 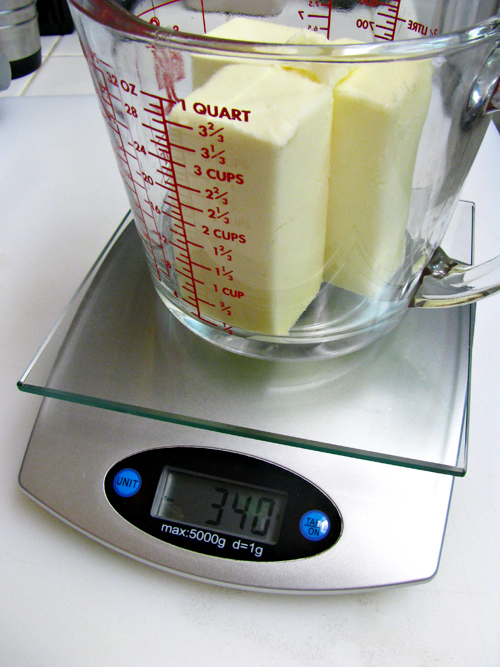 The next ingredient to weigh was the sugars. These were later mixed with the melted butter that is cooling. 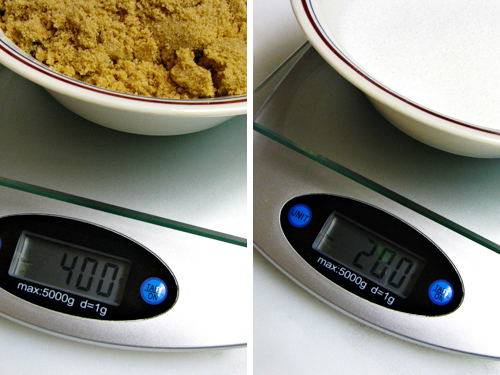 With my mixing bowl on my scale (and the weight of the bowl was zeroed out), I added exactly 21 ounces of flour. 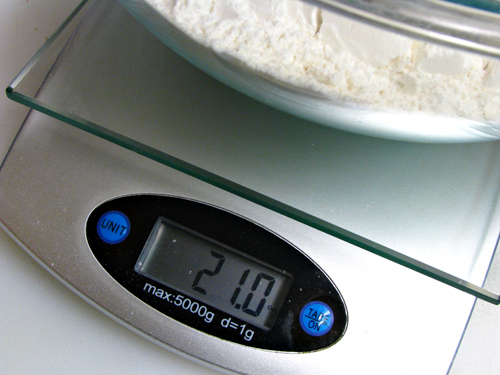 To this flour, I added the baking soda and the salt. I also added eggs to this mixture, and later added it to the butter/sugar mixture. 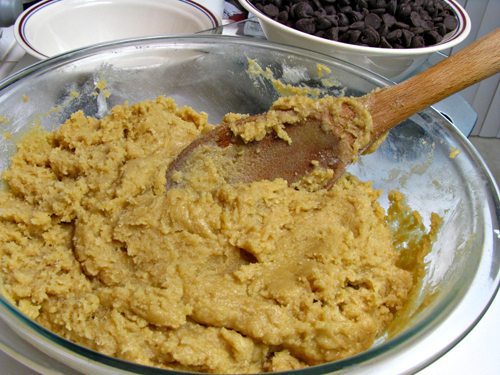 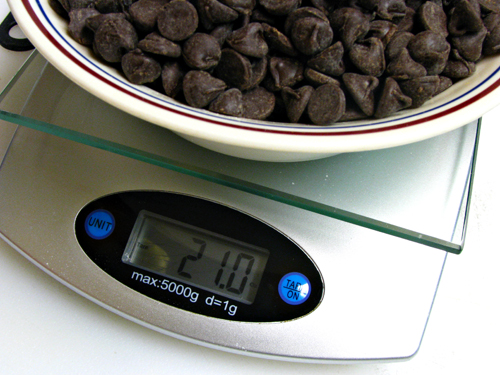 The chocolate chips were added to the cookie dough: 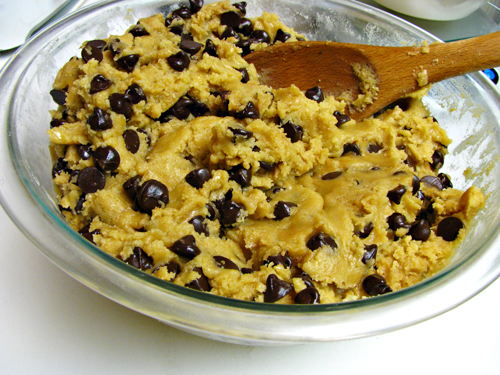 I scooped the cookie dough onto a parchment covered baking sheet…. 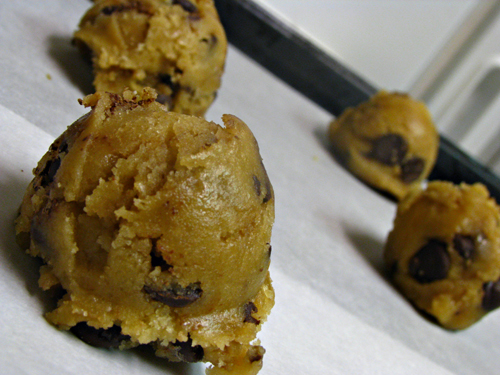 …until I had filled up the entire baking sheet. 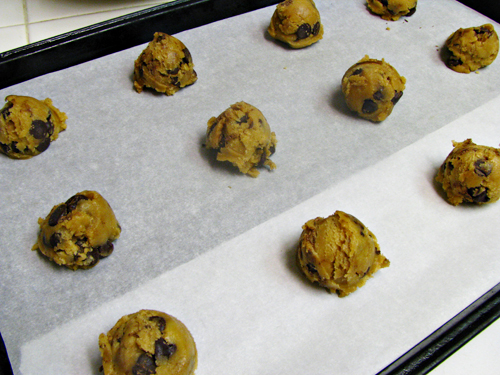 They baked at 325 degrees F for about 14 minutes and this is how they looked coming out of the oven: 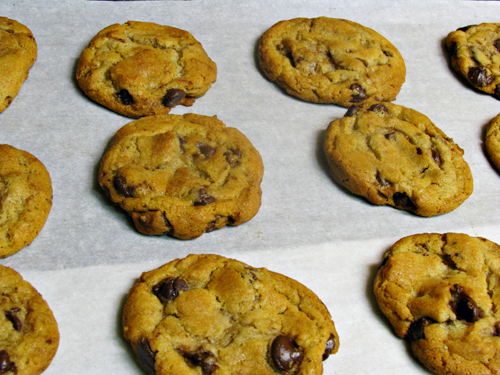 I let them cool for few minutes on the baking sheet, but then I carefully moved them to a cooling rack. 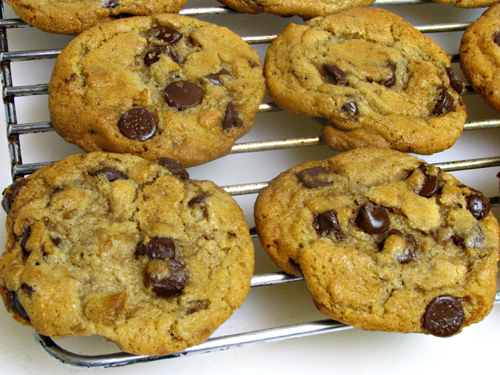 The results were one of the best chocolate chip cookies I’ve ever made! Was that because the recipe is just a great recipe? Or was that because I weighed the ingredients? I’m sure it’s a bit of both. But even aside from all this, I found the process easy and rather fun. Also, I’ve realized that weighing ingredients can mean less mess and less dishes to wash. For these cookies, I did everything separate to show you how it all works, but there is lots of recipes that could be done in just one bowl, with the scale being set to zero after each addition of an ingredient.

Most recipes list ingredients by volume (cups and spoons), rather than by weight. However, the next time you come across a great recipe, but notice the ingredients are listed by weight, give it a try! It’s easier than you think, and you might just find it easier, and the results more successful, than your measuring cups and spoons. 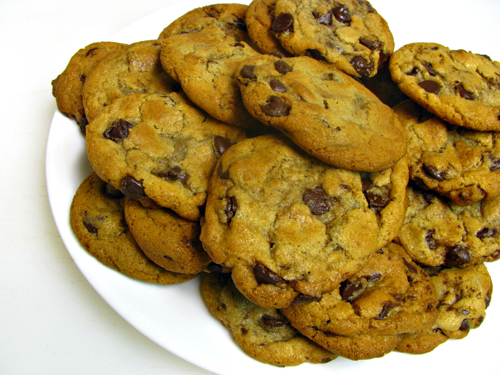