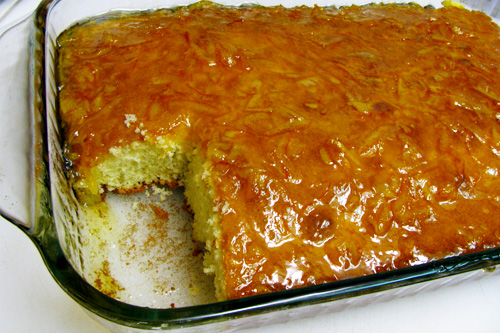 Sometime in 2009, I bought my first bottle of olive oil for cooking with. I had cooked recipes that called for olive oil, but I always substituted vegetable or canola oil. Every single time. The main reason was cost – I always tried my best to keep our grocery budget as low as possible and I didn’t feel that olive oil was necessary expense.

But in 2009, I started eating better. And I started learning how to cook better. I also learned of the health benefits of using olive oil. And so I decided at some point that when a recipe called for olive oil, I would, in fact, use olive oil.

One thing I have still not used olive oil in is baking. I know this might sound crazy, but I had NO clue that I could bake with olive oil. It wasn’t until I was checking out recipes in the Vegetarian How To Cook Everything app, I found not just one recipe that was I eager to try, but two. And they both used olive oil as a main ingredient. Sounds like it might be time to try something new (again)!

Since I was all out of olive oil, I took a trip to Walmart to pick up some more, plus the other ingredients that I needed for my recipe. One thing that I needed to buy was light olive oil as this was needed for the Olive Oil Salt Bread I wanted to make. Buying light olive oil is a new thing to me – I’ve only previous bought extra virgin olive oil. So I headed to the baking aisle to see what I could find. I had a couple for a brand I was unfamiliar with called “Carapelli” which would make it not much more than the Walmart Great Value brand, so I decided to go with that for my extra light olive oil.

I also needed a bottle of extra virgin olive oil for the Olive Oil Cake I was going to make. Considering that I didn’t have any other coupons for olive oil, I would normally buy the Walmart Great Value brand. But this time the Bertolli brand caught my eye. I’ve enjoyed some of their other products so I decided to give that a try. 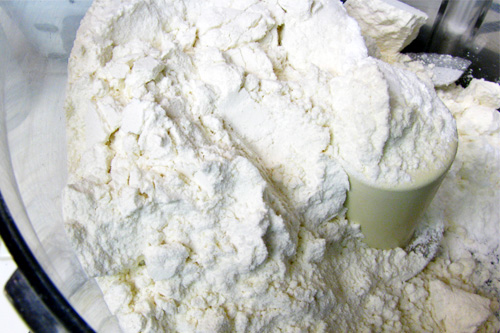 Once I got home, I started making the Olive Oil Salt Bread. What I instantly loved about this bread is that it’s mixed up in the food processor. So simple! The first step was to combine the flour,baking powder and course salt in my processor. 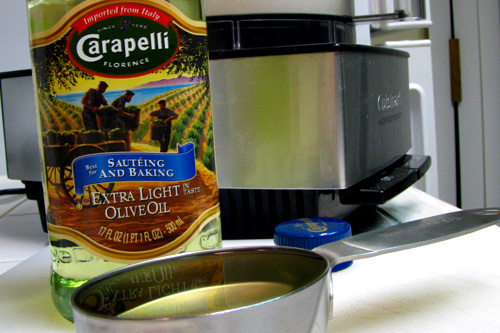 Next, I added the olive oil directly into the feed tube on my food processor. 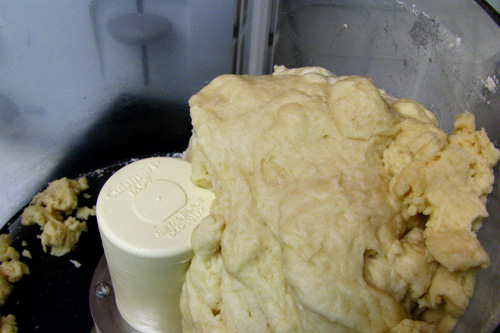 I also added 1 cup of water and almost magically, the dough formed. 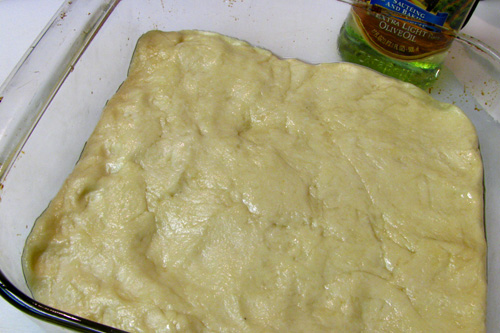 The dough was pressed into an 8×8″ baking dish that had been greased with olive oil. After it was pressed in, it was flipped over in the pan so the top was now thinly coated in olive oil. 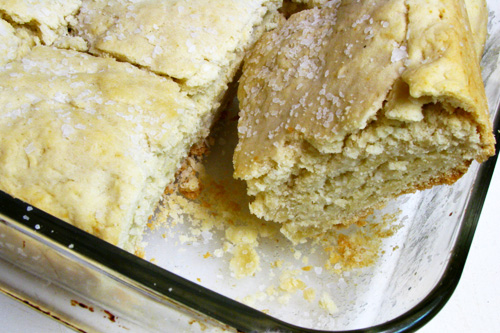 It was covered with foil and baked for 20 minutes. Then, it was removed from the oven, the foil was removed, and I sprinkled the top of the bread with coarse salt. The bread was returned to the oven to finish baking. After another 20 minutes, it was finished.

Overall, we enjoyed this recipe, but I do think I baked it a bit too long, so it was a bit drier than I would have liked. Next time I will leave it for less time (probably an issue with my oven). I really liked how simple it was – it took no time at all to throw this together. As for the use of olive oil as an ingredient in this – well, I really didn’t taste the olive oil much at all, but I would imagine that’s the point of using extra light olive oil in baking. It’s so very light that even when I dipped a piece of the bread in it, I found it to have almost no taste at all. Not a bad thing, I would imagine because extra light isn’t usually what’s recommend for dipping or dressings.

Here is the complete recipe:

From the How to Cook Everything Vegetarian app

Preheat oven to 375 degree F. Grease an 8″ square baking pan with olive oil. Place flour, baking powder, and salt in a food processor. Turn processor on and pour olive oil into feed tube. Then, warm water through feed tube. Process for about 30 seconds, or until dough has formed a ball. If too dry, you can add more water, 1 tablespoon at a time, and process for 5 – 10 seconds after each addition of water.

Press dough into greased pan. Flip over dough and press again into pan again (so now your top has a thinly coating of olive oil). Cover with foil and bake for 20 minutes. Remove the foil after 20 minutes and sprinkle top of bread with some coarse salt,; continue baking for another 20 to 25 minutes. Cool in pan; cut and serve.
———————————————–

The second recipe I decided to make to try out baking with olive oil was for Olive Oil Cake, which I also found in Mark Bittman’s How to Cook Everything Vegetarian app. When looking over the ingredients, I will admit I was initially a bit confused. In all my reading, I had heard that baking should be done with light olive oils – not extra virgin as it has a stronger taste. But, this recipe called specifically for extra virgin olive oil. In the end I decided to go with what the recipe called for – I’ve had great success with Mark Bittman recipes, so I decided to trust him. 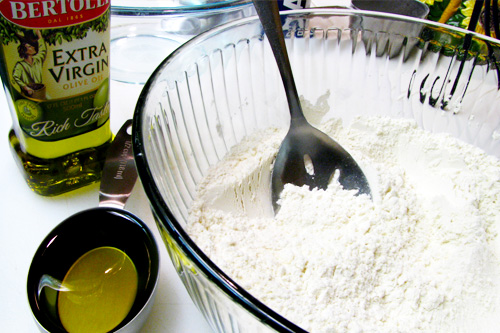 The first step in making Olive Oil Cake is to mix together flour, baking powder, and salt.

In a separate bowl, I creamed together the olive oil and sugar. 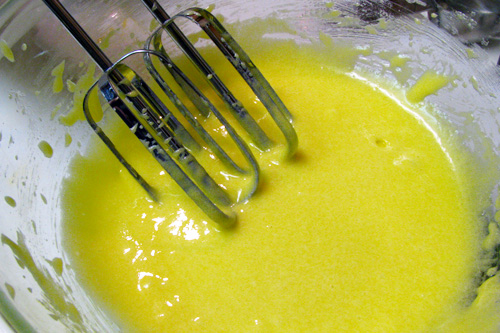 I added the egg yolks to my sugar/oil mixture. 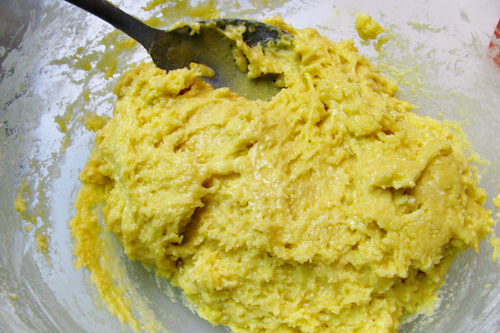 Then, I added the flour mixture to the egg yolks/oil/sugar mixture until it was all incorporated. 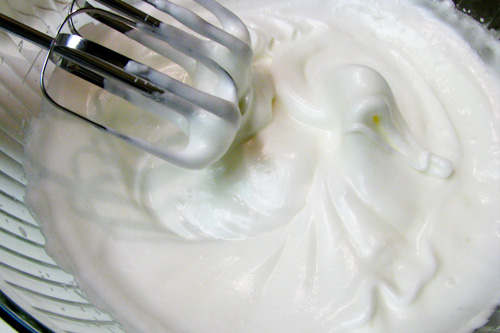 In another bowl, I whipped up the egg whites with a bit of sugar until soft peaks formed. 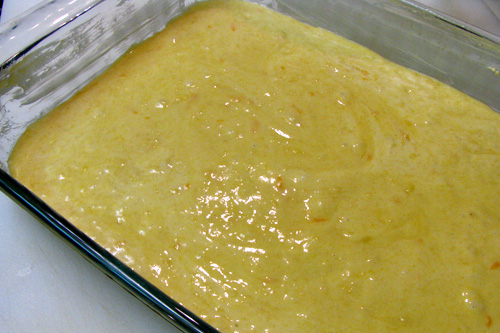 I very carefully folded the egg whites into the cake batter. Then, I poured it all into a 13×9″ baking dish. 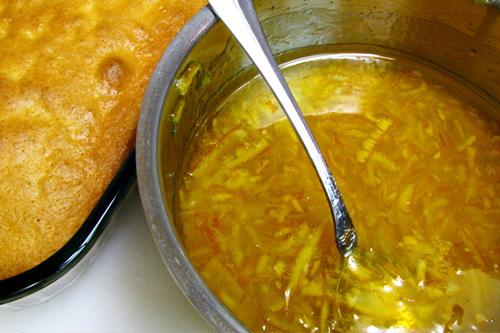 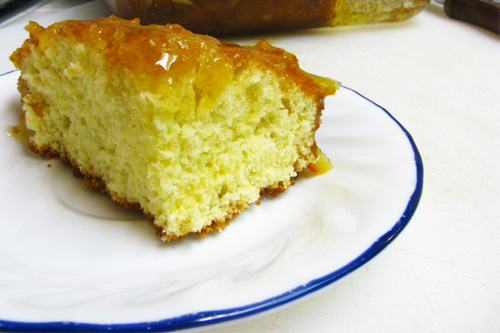 This cake is DELICIOUS! I loved it and will definitely be making it again. And, I’m not sure if the orange is masking the olive oil for me, but there isn’t an overpowering olive oil taste like I expected there to be.

Here is the complete recipe:

From the How to Cook Everything Vegetarian app

Preheat oven to 350°F. Grease 9×13″ baking dish. Combine the flour, baking powder, and salt in a bowl; set aside. In another bowl, combine oil and sugar and beat utnil creamy. Add egg yolks and beat until thick (5-7 minutes). Mix the flour mixture into the egg mixture until combined and smooth. Add the orange juice and zest and combine.
In a separate bowl, beat egg whites until foamy, then sprinkle ¼ cup sugar and continue beating until soft peaks form. Gently fold egg whites into batter.

Pour mixture into prepared pan and bake for about 35 minutes, or until toothpick inserted in middle comes out clean. Cool cake in pan. Frost or glaze, if you wish.
———————————————–

I’m considering my first olive oil baking experience a success. Yes, my bread was a bit dry, but I’ve now found a new favorite recipe – and so easy too! I love that. We’re also big fans of the Olive Oil Cake and can also see making that again.

I also really enjoyed trying some new olive oils. I enjoyed both varieties, but I would say that the extra virgin olive oil by Bertolli was the one I preferred due to enjoying the richer taste. With that said, I can see benefits in both varieties and do think my next bottle will probably be the extra light Bertolli olive oil so I can try that one out. I’m always on a search to find new favorites!

How about you? Have you ever baked with olive oil? Do you have a favorite brand or variety?

Note: This project has been compensated as part of a social shopper insights study for #collectivebias – As always, all opinions are 100% my own.