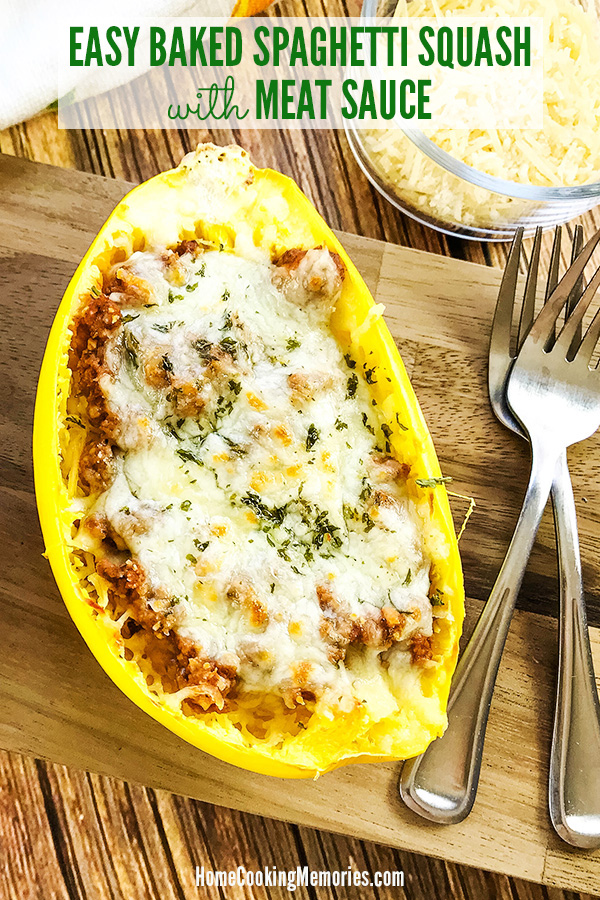 This post contains affiliate links for your convenience. We may receive a commission if purchases are made through our links to retailers. Click here to read our full disclosure policy.

It’s spaghetti squash time! While you can usually get it year round, spaghetti squash is usually harvested in the early fall, which means fall and winter are when you’ll get the best price at the grocery store.  We love spaghetti squash in our house, so we’re buying it often, but especially in the cooler months. We enjoy it as a side dish, such as in our favorite Bacon-Parmesan Spaghetti Squash Recipe and we love it as a main dish such our Baked Pesto Spaghetti Squash Recipe — which is great with chicken added to it.

The recipe we’re sharing today is another great version. This Easy Baked Spaghetti Squash with Meat Sauce Recipe is very similar to our popular 3-Ingredient Twice-Baked Spaghetti Squash Recipe, however, this one adds ground beef for our meat lovers. There is also some onion and garlic added for even more flavor. It’s an easy dinner idea with only 7 ingredients and by using spaghetti squash instead of pasta, this is a low carb dinner too (as long as you use a low carb spaghetti sauce). 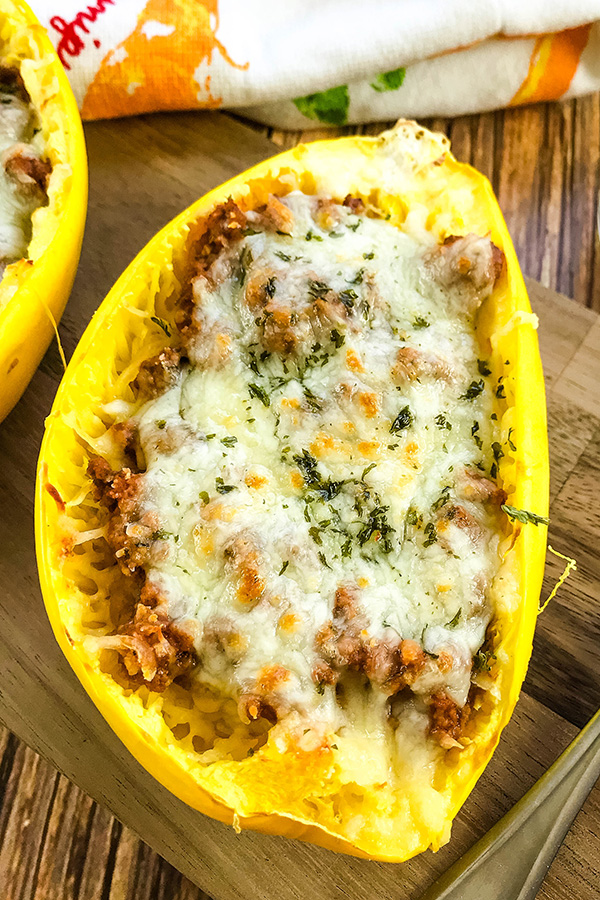 How to Cut Spaghetti Squash

The hard exterior of spaghetti squash can be intimidating and even if you have great knives, you might find it to be a challenge to cut it.

How to Roast Spaghetti Squash

How to Cook Spaghetti Squash in the Microwave 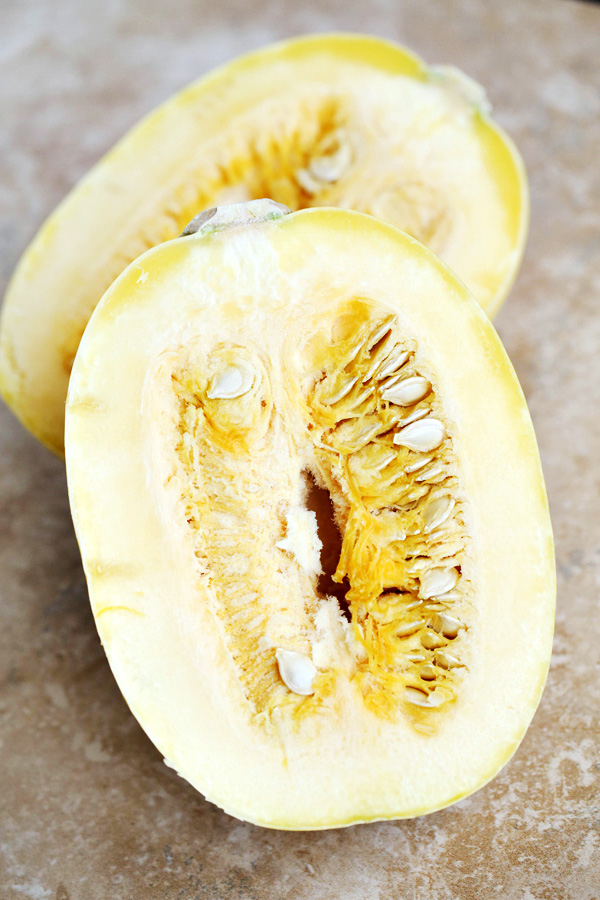 In a large skillet, cook together the ground beef, diced onion, and minced garlic. Combine the cooked ground beef mixture with your spaghetti sauce and set aside. 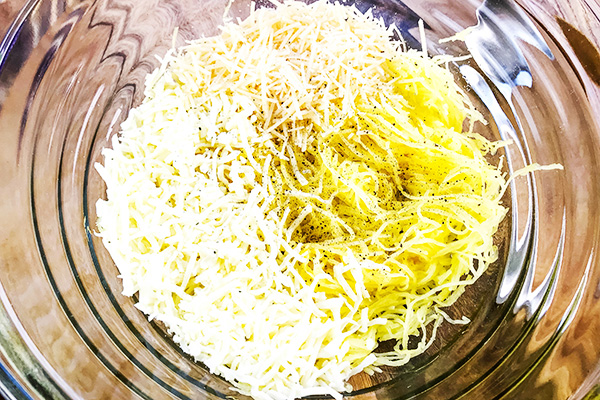 Divide the spaghetti squash and cheese mixture between the four empty squash shells. 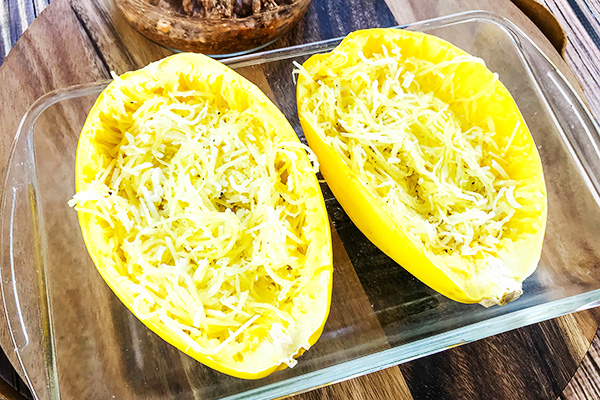 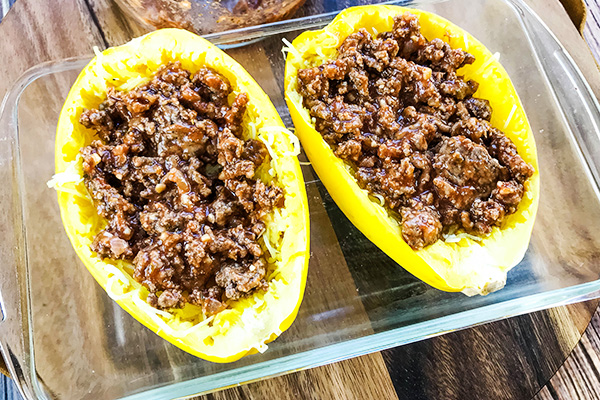 Top the meat mixture with extra shredded cheese. Bake for 20-25 minutes, until the cheese is melted and begins to brown. 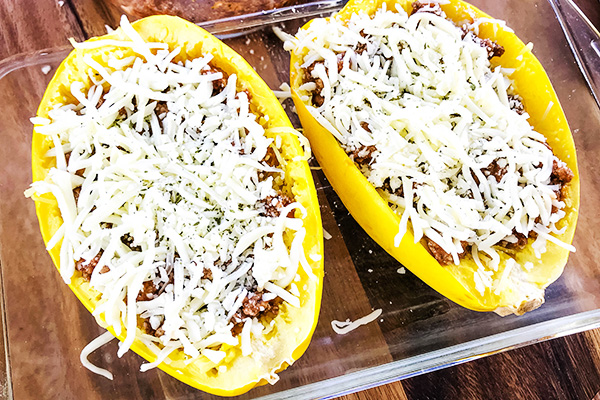 Remove from the oven and your Easy Baked Spaghetti Squash with Meat Sauce is ready to serve, right from the shells. 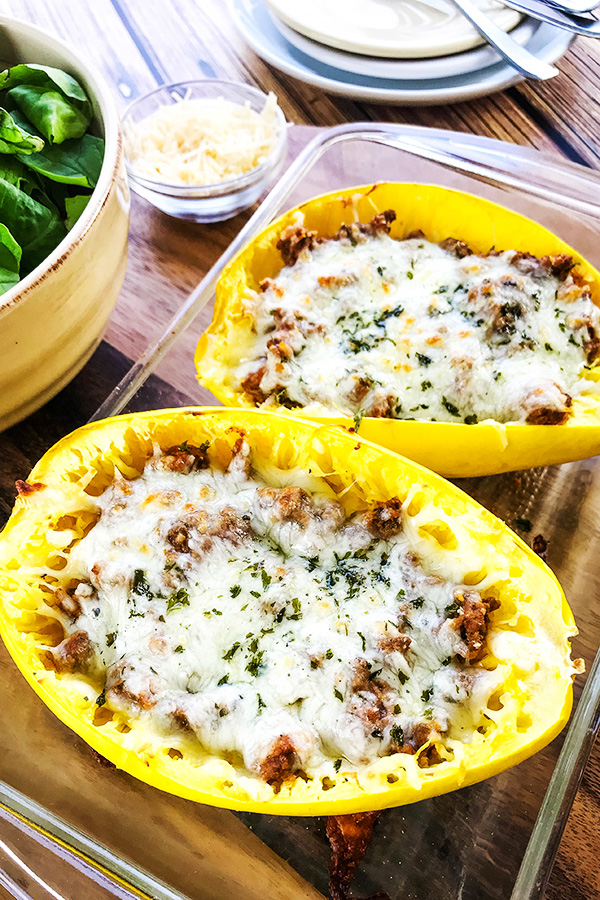 If you like spaghetti squash, there are LOTS of other ways to use it for meals. We have an entire article with Easy Spaghetti Squash Recipes for Dinner. You’re sure to find more recipes that will be perfect for you and your family! 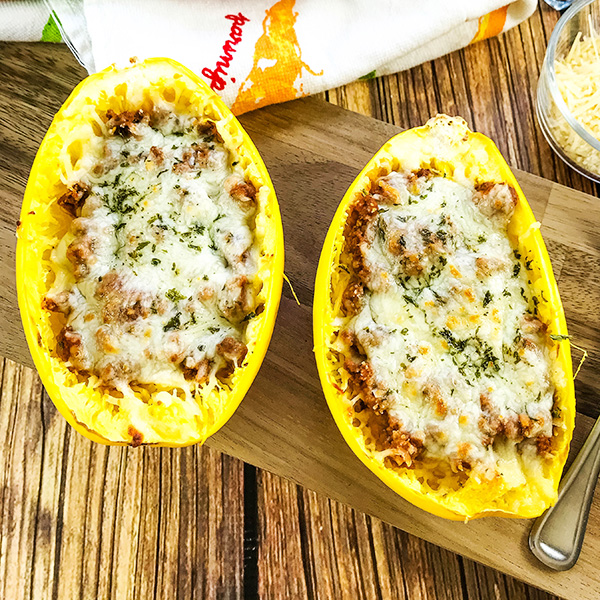 Here’s the full recipe for this Easy Baked Spaghetti Squash with Meat Sauce Recipe – ready for you to print. If you like this recipe, we’d love your support by sharing it on Facebook or pinning it on Pinterest.

Preheat oven to 375 degrees F. Line a baking sheet (or oven-safe baking dish) with parchment paper or grease with olive oil or cooking spray. Cut each spaghetti squash in half lengthwise, scoop out the seeds and discard. Place spaghetti squash halves, cut side down on a baking sheet. Roast in the oven for about 45-50 minutes or until tender.

Cook the ground beef, diced onion, and minced garlic in a skillet over medium-high heat until the ground beef is thoroughly cooked and browned. Drain off and discard any remaining grease from the meat. Combine the spaghetti sauce with the cooked ground beef and set aside.

Place the spaghetti squash boats into the oven and bake for about 10 minutes or until the cheese is melted and starting to brown. Remove from the oven, let cool a few minutes and serve.