Home / Family / How do you get children to try new foods? 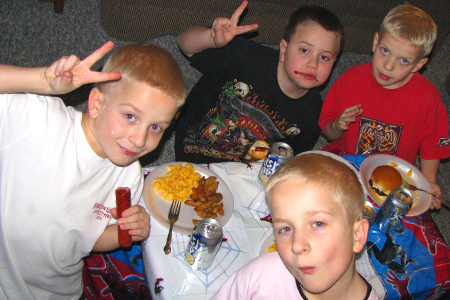 How do you get your children to try new foods?

That was the question asked when I was chatting with some moms about food.

It seemed that a common answer – or one that most everyone agreed with – was that children must take at least one or two bites of the food that was prepared.

I quietly disagreed. It wasn’t appropriate for me to share my thoughts on the matter at that time, so I didn’t. But I’ve thought about this over the last few days, so here I am.

We don’t require our kids to “take a bite” of new foods.

There, I said it. It’s just not a big deal in our house.

We don’t make them take a taste as condition of getting dessert or a second helping of another dish we are having. I guess you could say that in our house, the kids are given the same respect at the adults. I would never try to force my mom to take a bite of something I made, and I wouldn’t do that with my children.

I know the “you have to take a bite” seems like such a good motherly thing to do. After all, it’s getting them to try something new. New is good, right? How many of us have thought something looked gross, but tried it and found out that it was actually very good? So, I get it, I see on the surface that this makes sense.

But, I also know that there are some foods or dishes that would make me sick if someone forced me to take a bite – things I have never had and don’t have a desire to try. Why would I force my kids to try something just because I made it? Or just because I think I “know” they will like it?

Now, don’t get me wrong. While I don’t do the whole “one bite” thing, I do encourage my kids to try the food I serve. If you’ve read any of my previous posts, you probably know that our family has been trying LOTS of new things. I encourage Mattie to try everything new. Things you’ll here me say:

I have also explained the ingredients of new or more complex-looking dishes in an attempt to show my kids that it contains things they have previously enjoyed. For example, hummus. Hummus is something new to our family. When I made it the first time, I explained the ingredients, which resulted in them being willing to try it because they knew that they like all the things that were in it.

This encouragement and explanation is unconditional. There isn’t a threat or negative consequence if they don’t partake. You still get dessert (if it happens to be one of those lucky, super-fantastic days that we have dessert) if you don’t try the new dish I made. You can have seconds of mashed potatoes even you didn’t want to try the chicken.

…their child would never try anything new if they weren’t required to take a bite.

…their child has happily discovered foods that they wouldn’t have discovered if they weren’t told that they had to take a bite.

To this I say, you know your child best. I can see that this might work for some families. I realize that our way may be right for us, but not right for other families. And I am sure that in many families, it doesn’t result in an argument or bad feelings because the parents never push it that far. I’ll bet many families SAY their children must take one bite of all new foods served to them, but that they don’t REALLY push it far if their child refuses. Ultimately, if their child doesn’t want to eat it, they aren’t forced. (whew…good…)

So, if I don’t believe in the whole “one bite is required” thing, do my kids try anything new? Well, of course, they do. Much of what happens in our home is that my husband and I cook and serve the foods that we feel inspired to share. Most of the time, they do try it. But, sometimes they don’t. Mattie tends to be more cautious about new dishes that our older two children, so he’ll often pass on a new dish, particularly if it’s very different than anything he’s ever had before. But I have found that when he sees us enjoying a dish, he often becomes interested in it. If he doesn’t try it the first time around, he generally will give it a shot the second or third time.

Sushi is one perfect example. He flat out refused to try the California Rolls we made for the first time. The whole Nori (roasted seaweed sheets) freaked him out. Okay, no problem. The second time around was another “no thanks”. But, this last week I made them again, and lo and behold I got the question, “Mom, what EXACTLY is in it?”. I told him and he ate a couple pieces.

Am I the only one who thinks this way? In the chat with the other moms, I seemed to be.

And to answer the the question of how to get kids to try new foods: bring them into the kitchen to help you cook. That’s my answer. Not a fool-proof method, but lots of times when kids are the one helping prepare the food, they see that there is nothing scary about it and they become interested in trying it out. Mattie tried Deviled Eggs this week – for the first time ever – and I think it was a direct result of him helping me make them (he was never willing to try them before).

But I guess my overall thought on the matter is: does it matter? What’s the worst that will happen if your child doesn’t try that new food? It’s cool that Mattie did try the sushi, the deviled eggs, and the hummus, but does it really matter?

If a child doesn’t try something, it doesn’t mean that they will NEVER eat it. Maybe they just aren’t ready for it yet. There are dozens of foods that I refused to try when I was a child, but I love them today. Alternatively, there were many foods I did try as a child that I thought were gross. It wasn’t until I was older that I tried them again and realized that I do like them (avocados!).

What are your thoughts on the whole “you have to take one bite” thing? Do you have ways that encourage your kids to try something new?