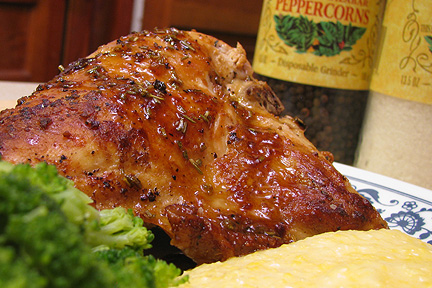 There is something so wonderful about a recipe with only a few ingredients. Not only does it make my world easier, but I’ve found that many times the simple recipes are the ones that my family loves the most. Give ’em a nice piece of chicken or fish, fresh vegetables and maybe some rice or potatoes, and my family showers me with hugs, kisses and accolades. 🙂

So, last night, I made Lemon-Rosemary Chicken Breasts, which I found in the May 2010 issue of Cooking Light magazine. I was drawn to it because it only had five ingredients (not including salt and pepper) and not only did I have all of them on hand, but I had a bunch of lemons that needed to be used.

Oh my, it was so good! Everyone gobbled it up and agreed that this is one that we’ll put on the menu again. I served it with some Cheesy Polenta and steamed broccoli.

Here’s how I made it:

2. Season both sides of chicken breasts with salt and pepper. Heat oil in a large skillet over medium-high heat. Place breasts in skillet, cooking for about 3 minutes on each side. Remove from skillet and place breasts in prepared baking dish. Bake for 25-30 minutes or until meat thermometer reads 165 degrees.

3. While chicken bakes, add chicken broth, lemon juice and rosemary to the skillet; heat over medium-high heat. Bring to boil, scraping pan to bring up browned bits of chicken that might have been left in the pan; reduce heat and simmer for 20-30 minutes or until mixture reduces to a slightly thicker sauce. Season with salt and pepper as desired.

4. When chicken is done, remove from oven and allow to rest for about 10 minutes. Spoon sauce over each chicken breast (I did this right in the pan, but you could remove chicken to serving platter first and then spoon the sauce over each one). Serve.