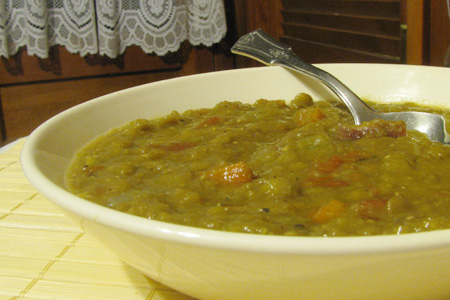 For the first time in a long time, I checked out some cookbooks from the library. One of my favorite chef’s is Rick Bayless so I requested every single one that had anything to do with him in our local library system. Most have to be sent to me from other libraries in our region (or I’m next in line for those checked out), but the first one I have received is Rick Bayless’s Mexican Kitchen – Capturing the Vibrant Flavors of a World-Class Cuisine.

One thing that I have never really done before, that I have been doing with this cookbook, is READING it. By “reading”, I mean actually READING it. Turning the pages, reading the words, taking it all in and most of all, learning from it. There is so much information in this cookbook, so much more than just recipes. I really don’t feel like I will be able to remember all of this, but let’s hope at least a smidgen of his knowledge will stay with me.

This brings me to my soup for this week: Lentil Soup. I planned this not knowing which specific recipe I would make, but was inspired by numerous bloggers who had made their own versions. I had a idea of what I wanted my Lentil Soup to be like, so while there was some great ones out there, I wasn’t finding exactly what I was looking for.

I wanted my Lentil Soup…

The result was my own creation – a cross between a Lentil Soup recipe by Alton Brown and one from Rick Bayless. And you know what? It turned out really good! Most of the recipe is based upon Alton Brown’s Lentil Soup version on the Food Network website, but the addition of bacon and Mexican oregano comes from Rick Bayless’s Mexican Kitchen cookbook. The use of the Rotel and Muir Glen tomatoes was my own idea, mostly because I wanted them to help give the spicy and smoky flavor, but also because I had them on hand. I made some other changes, mostly regarding the amount of celery, carrots, and onion and omitted some of the spices that I didn’t have. The following is exactly how I made it: 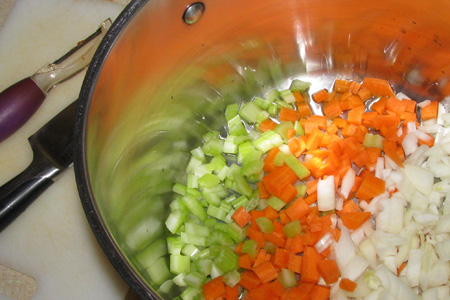 Directions:
1. Heat olive oil in large pot. When hot, add the onion, carrot, celery and salt and cook until the onions are translucent. Stir in cooked bacon.

3. Bring to a boil, then reduce heat to low. Cover and cook at a low simmer until the lentils are tender, about 35 – 45 minutes.

4. Turn off heat. If you have a stick blender, you can puree to desired consistency. If you don’t have a stick blender (I do not have one), allow soup to cool for about 15 minutes and then pulse about half of the soup in a blender until blended. I did this in two batches in my blender; be sure to only fill your blender up about halfway and place the cover on it. I usually cover the top of the blender with a folded kitchen towel and apply pressure as I am pulsing the soup in short bursts of power. Combine the blended soup with the unblended soup and serve.

I do have to say that I wish I hadn’t blended quite so much of the soup – maybe a tad bit less – but it was still good. I served this with some crusty French bread and there were no leftovers – even Mattie, who thought it was a bit spicy, ate a full bowl of it and told me that it was yummy. 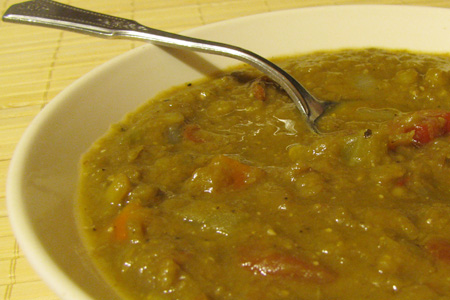 Oh! And I must mention that this is the first time I have ever cooked with lentils! Another cooking first for me. I think the next time I cook with them I will make some sort of lentil burgers — a homage to my mom who used to make lentil burgers ALL the time when I was a child (and I fussed about eating them).

So that’s all for now – have a great weekend everyone!