With thanks to Kia, we were provided with a 2013 Kia Optima Hybrid for a test drive experience. Here’s our thoughts…. 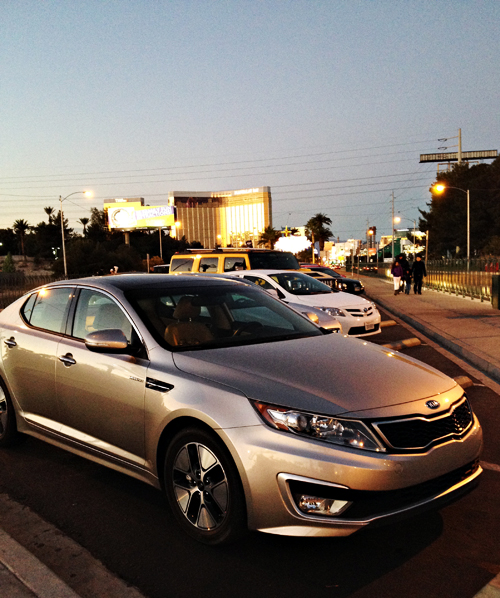 Over the last few months, David and I have been having the fun opportunity to have week-long test drives with various vehicles. Most of our test drives have happened on our way to comic book conventions in San Diego and Los Angeles, which was perfect because it gave us maximum time to play with all the features and really get to know the cars.

This time around, I was approached if I wanted to try out the 2013 Kia Optima Hybrid. We’ve never driven a hybrid before, so I said that I would love to. There was only one problem: I didn’t have anywhere to go. Sure, I could plan a quick day trip to Arizona, Utah, or California, but with the holidays coming, we had a lot to get done and going out of town wasn’t going to work. 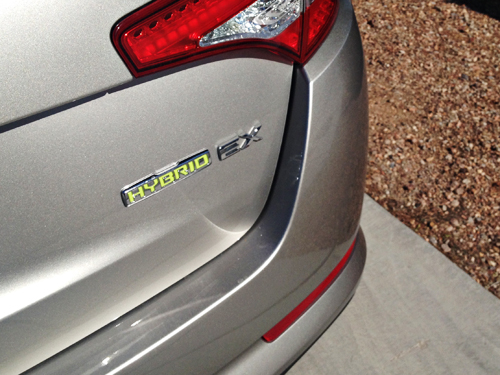 But, then I realized…I don’t have to go out of town for driving fun. I live in Vegas! People from all over the world come to Vegas and one of the great places to drive is down the Strip. David and I looked at our schedules and planned several hours that we could get away for some shopping, lunch, and sightseeing.

Shortly after the Optima arrived, we checked it out. We were just as impressed with the interior on the Kia Optima, as we are with the other Kia’s we’ve tested. We have a sort of comfortable reliance on what to expect when we hop in to a Kia and this didn’t let us down: panoramic sunroof, rear-camera display, navigation system with SiriusXM, dual-zone temperature controls, and so much more. 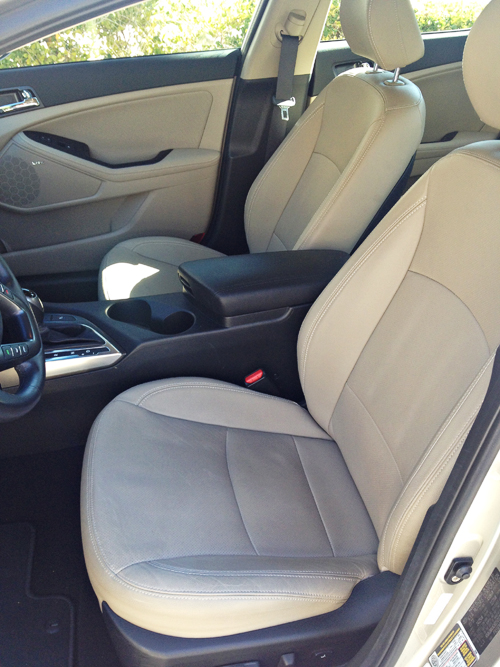 Driving a hybrid is totally new for us, so we really didn’t have a clue what all details on the displays were telling at first, but I found it fascinating and found myself Googling details as David was driving. 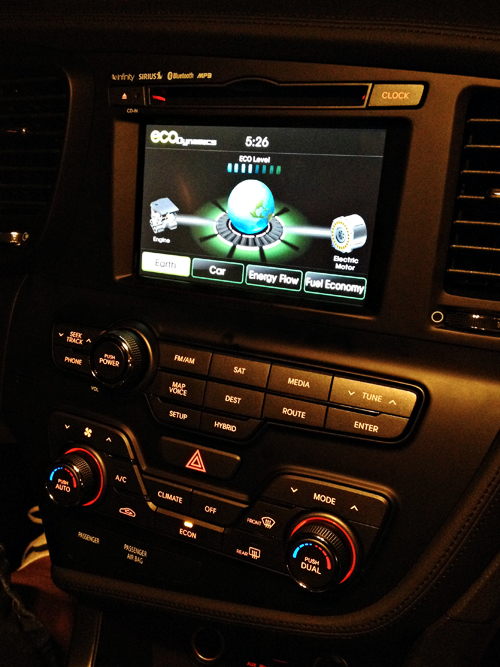 One of my favorite displays was the ECO level display. I learned that the more economically we drove, the more flowers and leaves appear. I know it sounds silly, but that display was so beautiful that it really had me paying attention to how I was driving. It was almost a game to get the flowers to become larger. 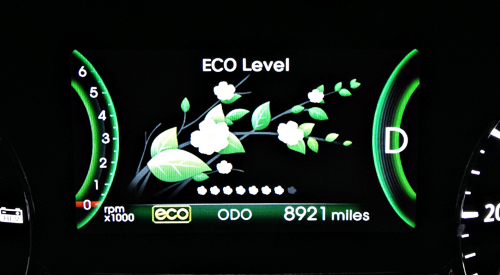 The majority of our day was at Planet Hollywood, where we could do some shopping at the Miracle Mile Shops, but also grab a late lunch/early dinner. 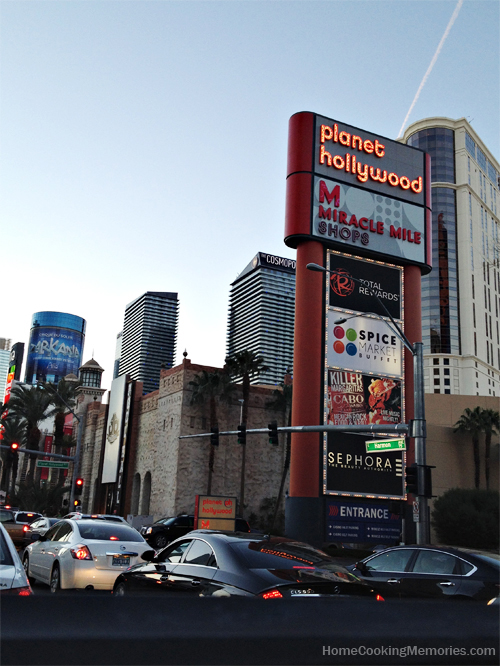 After we ate, we walked around and realized that all the NASCAR drivers were at Planet Hollywood for NASCAR Champion’s Week . We hung out and took some photos before we headed back in where it was warm. 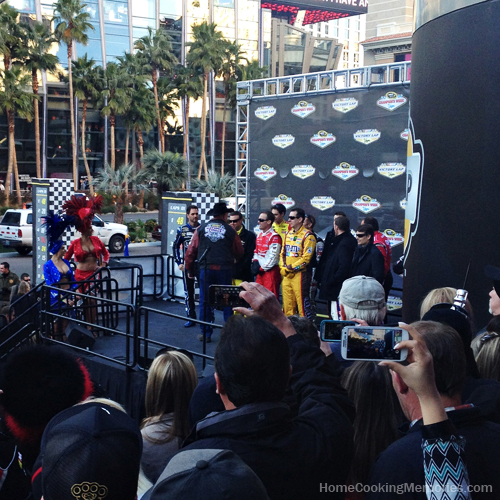 After we left Planet Hollywood, we headed south on the Strip towards the famous Las Vegas sign. We kept the panoramic sunroof open, which gave us some AWESOME views! We haven’t had a car in years that has a sunroof (our last one was in the early years of our marriage), but I have to tell you….I want one again! It really makes for a fun driving experience. 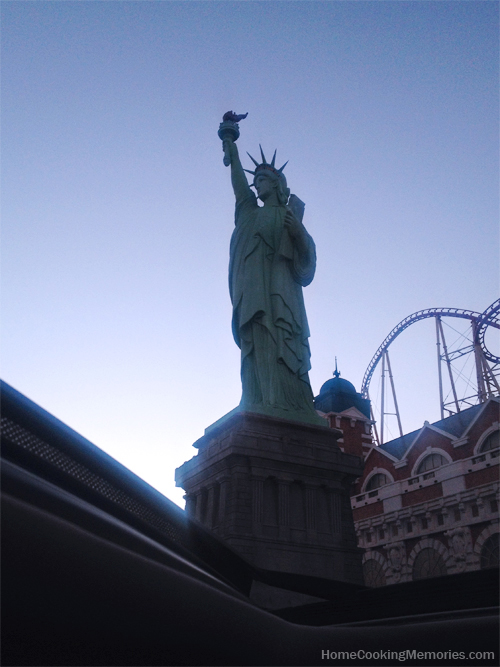 We thought that the Kia Optima deserved to be our first guest that we took to the Las Vegas Sign, so this was a must before heading home. Ready for the sad part?? This was our first time too! We’ve driven past the sign SOOO many times, but we’ve never stopped to see it up close or take photos. 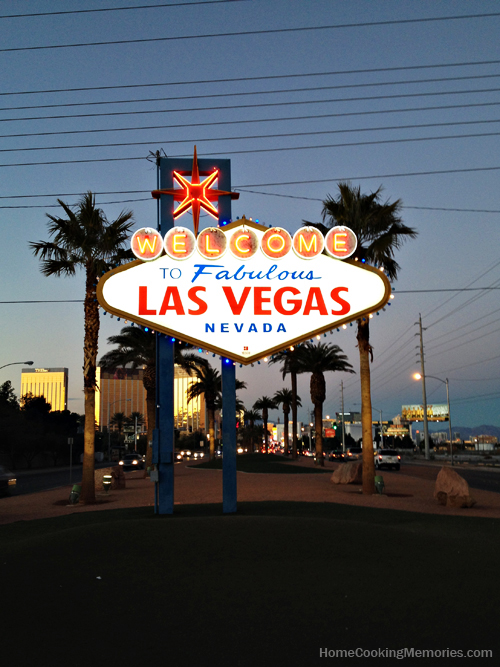 In the end, our only major “downfall” is that it won’t fit my family of 6 (which 4 of us are adults) — but then again, I knew this going in, as it’s a 5-seater, mid-size sedan. In addition to this, our oldest daughter, who is quite tall, did sit in the back and found there to be not much head room for her, although she had enough when she sat in the front. All in all, I could see the Optima being a perfect option for David, as the car he drives to work and back is much smaller than the Kia Optima — and definitely not as stylish.

Driving the Kia Optima around for a week was a lot of fun. The features, both in and out, are everything I’ve come to love in a Kia, plus I like it’s sporty look. But while all this is wonderful, I have to share with you the part that made the most impression on me. When we received the car, it has a full tank of gas. During the week we had the Optima, we drove it all over Vegas…literally. We took the long way home from the Strip, plus the other days were full of driving kids and David used it for work. We took a drive out to Henderson and we were stopping and going all weekend with Christmas shopping. I couldn’t believe where the gas tank level was — we returned it with 3/4 of a tank left!! All of the Kia’s we’ve tested were better on fuel mileage than our current mini van, but that is just crazy awesome! 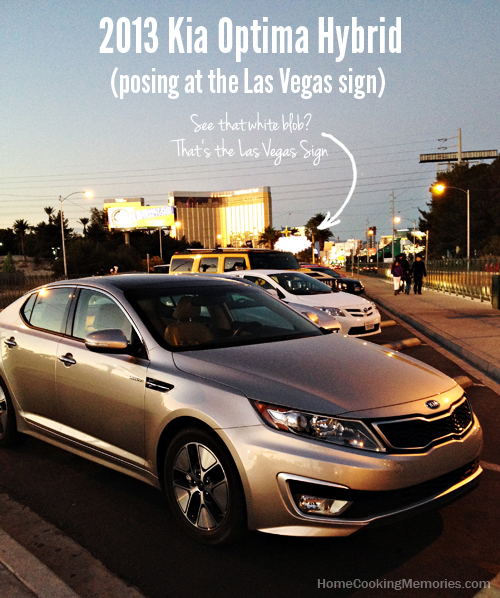 If you are single, a couple, or have a small family, and especially if you are looking to make greener choice in your life, I think this is a wonderful car for you to consider. The gas mileage alone is impressive and that’s not even considering all the other great features (three words: heated steering wheel — I wish I had that right about now).

For more information on the 2013 Kia Optima Hybrid, visit www.kia.com

Also, check out our Kia Sorento review and our Kia Cadenza review.

Disclosure: With thanks to Kia, we were provided with the 2014 Kia Optima Hybrid for this test drive experience