This Apple-Cinnamon Coffeecake is a lighter version of traditional coffeecakes, full of apple and cinnamon. A perfect baked treat for a beautiful Autumn day. 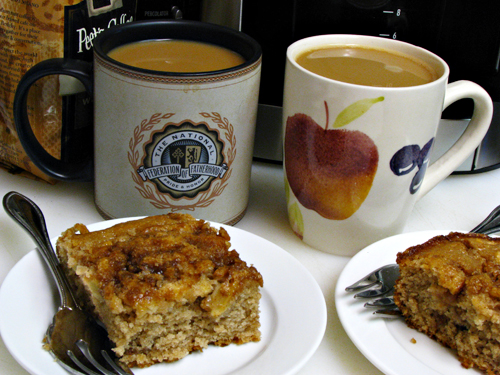 David LOVES baked goods with his coffee. He enjoys coffeecakes, muffins, biscotti, donuts…pretty much anything that pairs well with coffee. Since I know this is the way to his heart, I decided to surprise him with something one weekend. Knowing his love of cinnamon, I thought an Apple-Cinnamon Coffeecake would be a perfect choice.

To get started, you will mix up the flour with sugar, cinnamon, baking powder, and salt. 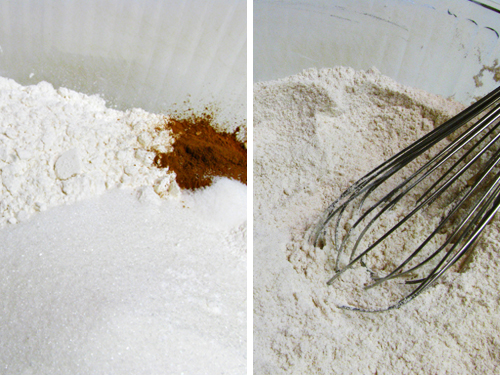 Melt some butter in a separate bowl (I use a large glass measuring up) and to that, you will add milk, egg, and vanilla extract. Add this mixture to your flour and mix it all up. 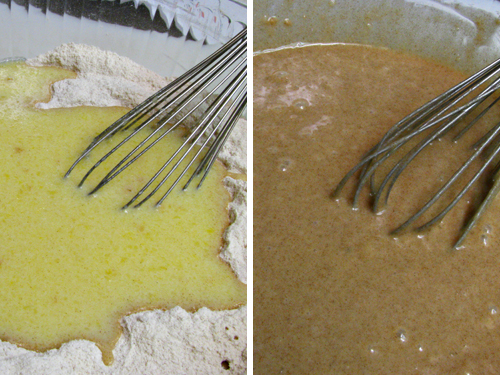 Peel and chop two granny smith apples and add them to your mixture. 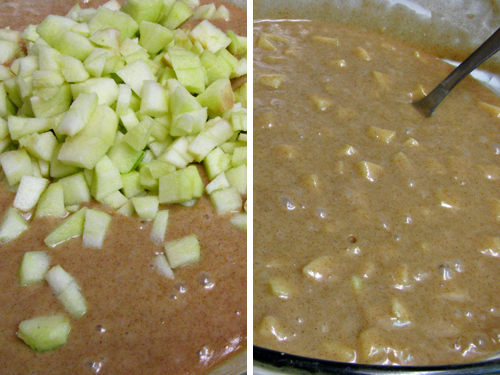 Next, prepare the streusel. In a bowl, mix up your brown sugar, flour, and cinnamon. 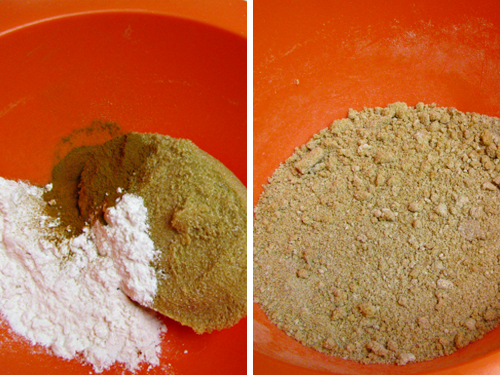 Then, cut in the butter until it is all crumbly. 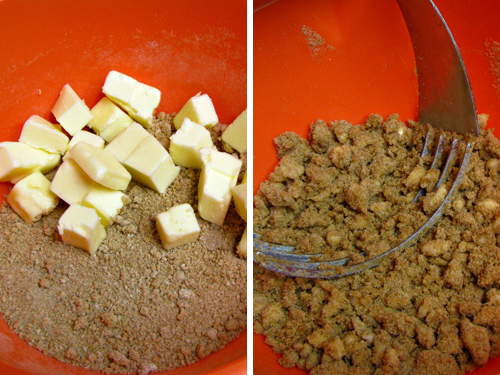 The apple batter is poured into an 8.5×11″ baking dish and then you will sprinkle the streusel mixture evenly over the top. 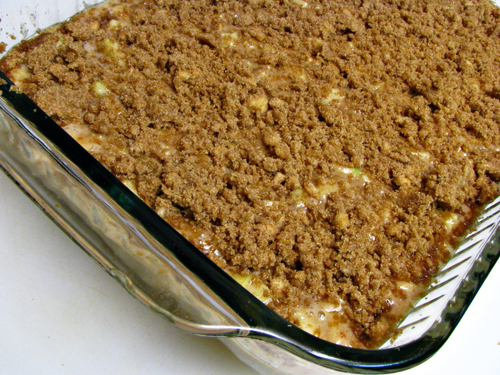 Your Apple-Cinnamon Coffeecake is baked for about 45 minutes and when it was done….ahhhh, it smells SO good! It is VERY moist and full of apple-cinnamon flavor. And it’s lighter than traditional coffeecakes, so that’s a plus. 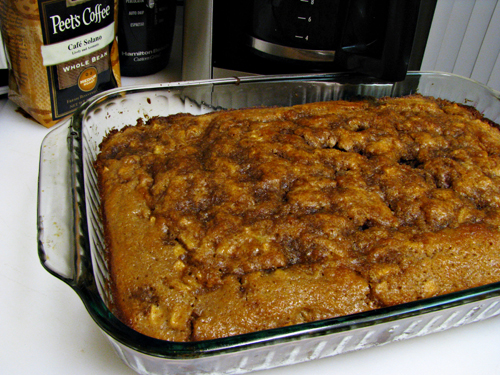 I paired my Apple-Cinnamon Coffeecake with some Peet’s Coffee. David had never had this coffee before so I thought it would be fun to try something new with our coffeecake.  I don’t usually make the coffee in our house, but you’ll be so proud….I figured out how to grind the beans. 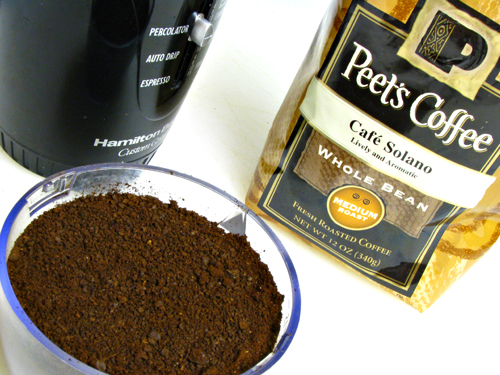 And I brewed us up some Peet’s coffee and I got our coffee cups ready. We have LOTS of coffee cups – I might do a blog post in the future just about all of our mugs. The two that I am using today is a Hallmark Father’s Day mug for David, and the fruit mug is one that Mattie bought for me at the Dollar Tree last Christmas.And when the coffee was done brewing, I filled up the mugs. I wanted to take a sip right away…I was so eager to taste the Peet’s coffee, but I waited until I could surprise David with my ninja-like coffee making skills. 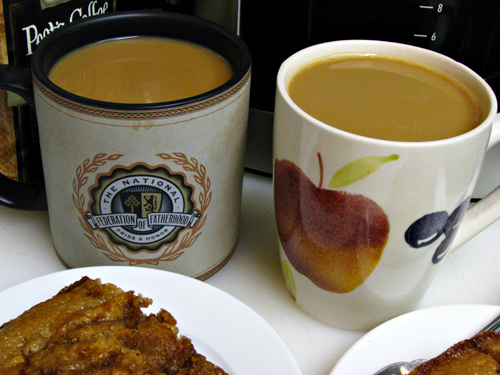 Finally, I shared my surprise with David — not only did I grind the Peet’s coffee beans, but I made the pot of coffee AND made a coffeecake. He had a little chuckle…he said thank you and that he loved it all. I asked him to sip the coffee — he didn’t know I had switched our usual coffee beans with the Peet’s. He took a sip and could tell right away that it wasn’t our usual…but he said it tasted great. It was more mild than our usual (remember, we usually drink bold or extra bold), but that it was full of flavor. I agreed — definitely a great coffee and I did enjoy the Cafe Solano variety enough that I can see us buying it again. 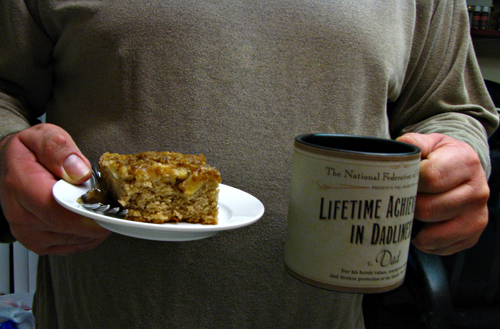 David mentioned to me that he had heard of Peet’s Coffee when we were on the East Coast, but that he didn’t think anyone was selling it there yet. When we moved to Nevada, he saw that several of our local stores sold it, so he had already planned to pick up a bag one of these days so we could try it out (he loves to try new coffees). You snooze, you lose…I beat him to it! 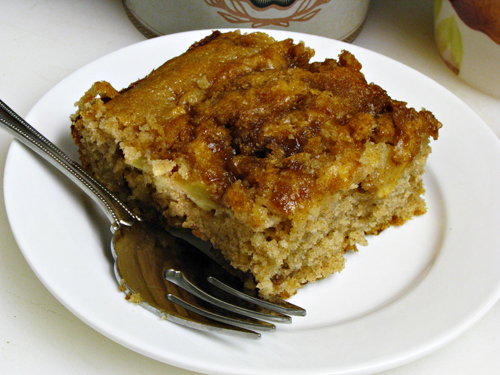 If you want to learn more about Peet’s Coffee (they have some really interesting history on their site), or finding out what stores in your area carry Peet’s Coffee, you can find all that here:  http://www.peetscoffee.com/

I have put together a slide show of my shopping experience when I bought the Peet’s Coffee and other items on my shopping list. If you’d like to check that out, you can see it here: Shopping for Apple-Cinnamon Coffeecake Recipe & Peet’s Coffee Switch

This shop has been compensated as part of a social shopper insights study for Collective Bias #CBias — all opinions are, as always, 100% my own.