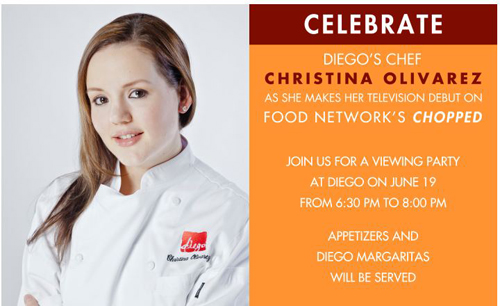 There is so many fun events around Las Vegas, and this is no exception. Recently, I was invited to a special viewing party at Diego Mexican Cuisine in the MGM Grand. The reason for this viewing party was for us to watch the television debut of Diego’s Executive Chef, Christina Olivarez, on Chopped on Food Network. How cool is that? I’m a major fangirl for Food Network and Chopped is one of the shows I watch regularly. 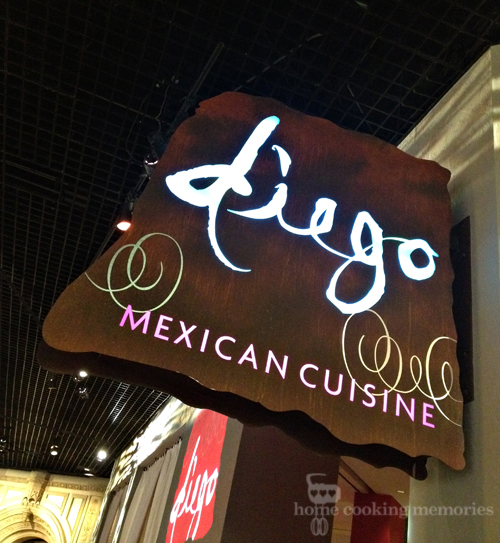 For those of you who might be unfamiliar with Chopped, it’s a competition cooking show, which happens in 3 rounds: appetizer, entree, and dessert. For each round, the chefs competing get a basket of food items that they must use in their dishes — and these baskets are unknown until the start of the round and the items usually don’t seem to work well with each other. At the end of each round, one chef is “chopped” and asked to leave the competition. The winner of each episode wins a nice $10,000. 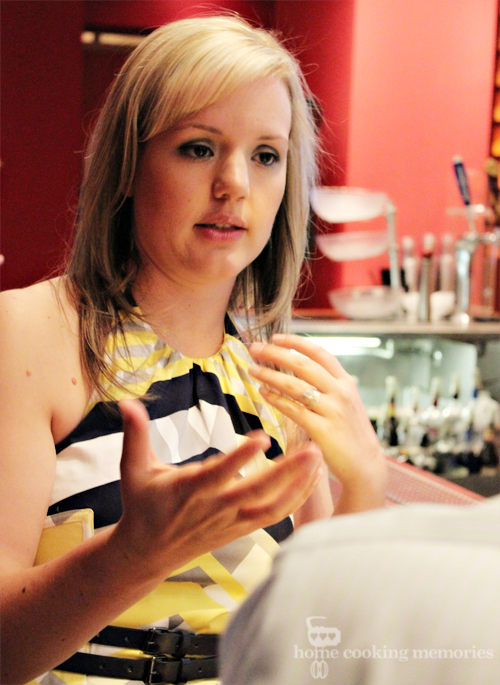 After we arrived, David and I found a spot near the bar and one of the several TV’s that was set up. We snacked on tortilla chips, salsa, and guacamole and chatted with our friends from the Vegas Bloggers group. While we waited for the show to start, we had a chance to talk with the Chef about about her menu at Diego and her culinary career, plus we snapped some photos. 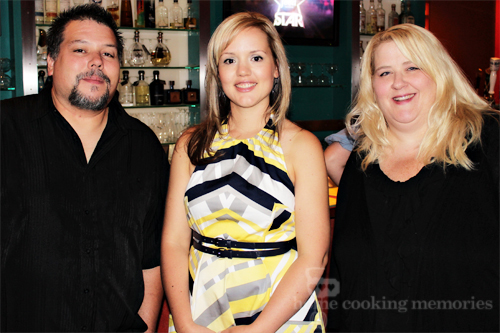 Watching an episode of Chopped, in the same room as one of the chefs competing, is cool enough on it’s own. But, it’s even better that Diego’s would be serving appetizers and margaritas. Ooooh yeahhh! 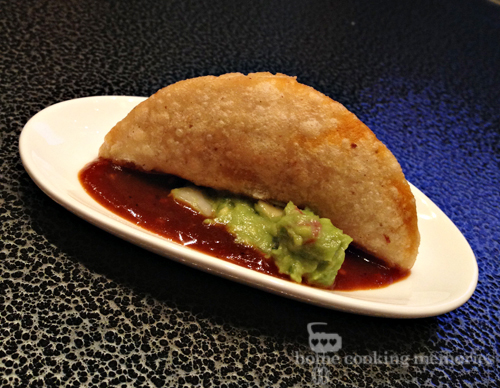 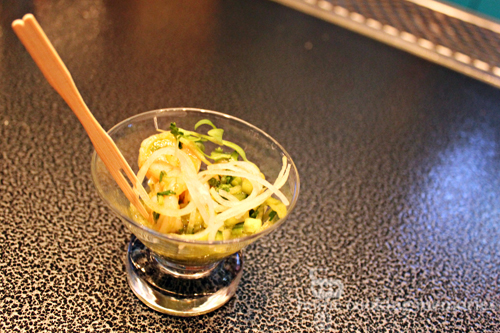 And, Huitlacoche Beef Tacos (Beef Cheek Braised with Huitlacoche, Wild Mushrooms and Queso Anejo). Please excuse the photo of this one — I had a few of these, but I popped them in my mouth before I could take a decent photo. 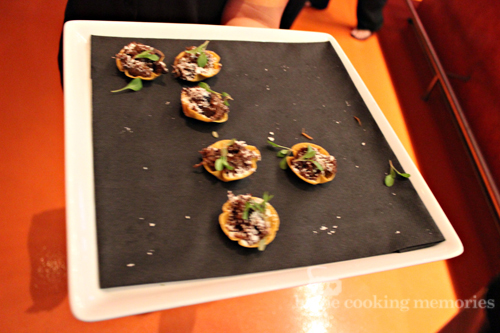 All of the appetizers were excellent — if I had to pick a favorite I would say mine was the Empanadas de Pollo, while David’s favorite was the Ceviche Verde.

I can’t neglect to tell you about the margaritas. True story: I’ve never had a regular margarita. If I’ve had one, it was always a flavor variation, such as a Strawberry Margarita. But Diego Margaritas were on the house, I drank a couple of them, and can say that I prefer the flavor of traditional margaritas. Geez, what took me so long to try one?? 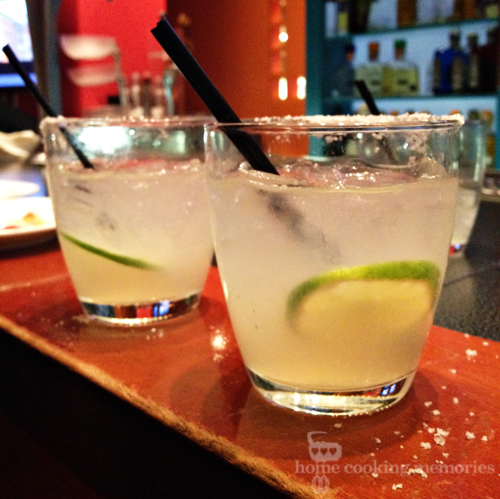 It was so much fun to watch the show and be surrounded by Chef Christina’s fans and her family. We laughed, we clapped…even some boo’ed in a few spots. Of course, none of us knew if she would win or not, but we were all hopeful. Each round had chocolate of some kind in the baskets (such as “chocolate lips” that you would see in stores around Valentine’s Day), but Chef Christina made her ingredients look easy and proved that she had what it takes to keep from getting “chopped”.

It was about halfway through the show that I started to think she was going to win….and she did. 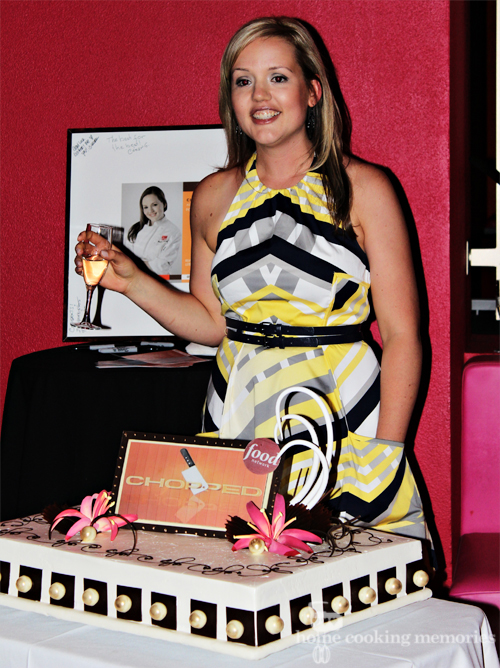 A beautiful Chopped-themed cake was wheeled out so we could celebrate with her…. 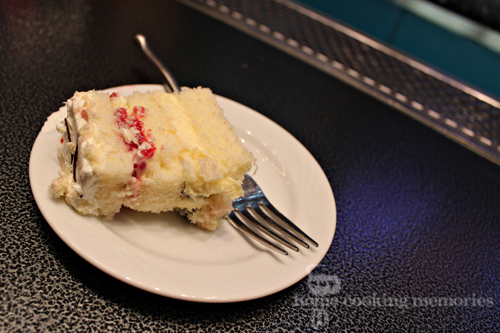 …and, of course, champagne was served. 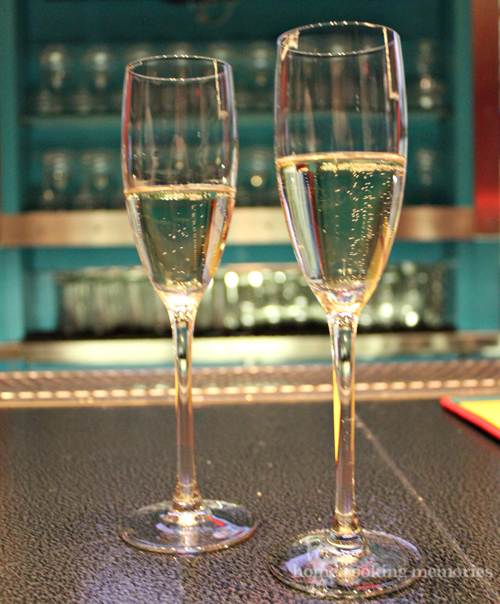 Needless to say, I had a blast! I don’t think I would have ever imagined celebrating and and meeting a winner of Chopped, but I did and I won’t ever forget it. Congratulations Christina! And thank you to Diego Mexican Cuisine and MGM Grand for the opportunity!

NOTE #1: For another look at our fun night, Abigail from Lovin’ our Chaos wrote a recap here too: Christina Chopped | Live Event at MGM Grand

Want to dine at Diego Mexican Cuisine? Here’s where to find them:

Disclosure: Vegas Bloggers and I were invited to the Chopped Viewing Party at Diego for Christina Olivarez’s debut because of the social media impact we provide to Las Vegas events. I was not required to post about this event, but happily have because I was excited to share it with my readers.