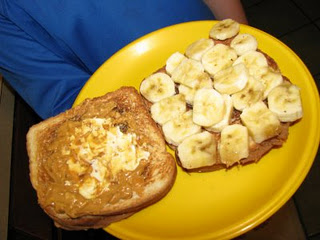 He was shocked. He couldn’t believe it. He glared at me as if to say, “YOU KNEW ABOUT THIS?“. It was almost the same look I got when he learned that there was peanut butter with actual little pieces of nuts in it (aka chunky peanut butter). See, I told you he was deprived.

But, anyway, I told Mattie that yes, I knew all about peanut butter and banana sandwiches and that I’ve had many in my lifetime. I knew where this conversation was going, so I asked him if he wanted to make one.

Mattie did just that and the photo above is the proof. But, do you notice the butter on the one side? It’s funny that he thought to put butter on one side, because this is exactly what we did when I was a kid – peanut butter and butter sandwiches. And I’ve never shared the memory with him, so I thought it was quite interesting that he did that on his own.

Now I’m wondering when he’ll channel the peanut butter and parmesan cheese sandwiches that I did one time. {insert big grin here}