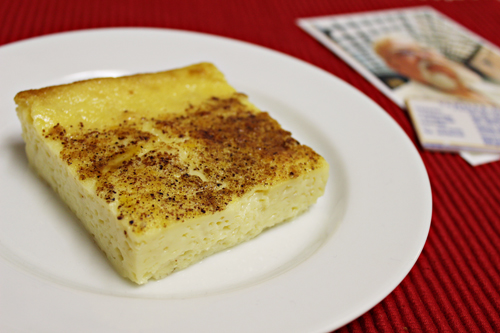 Today is my Dad’s birthday. He would have been 65 years old.

This is his first birthday since he passed away last January. 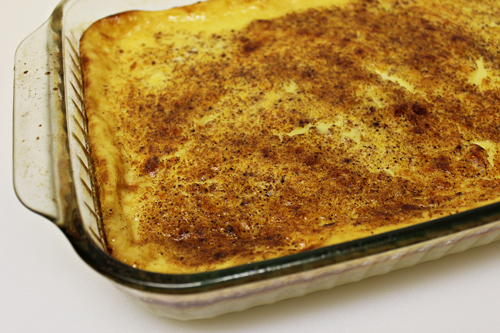 Vanilla Custard has been something I have talked with my Dad about several times over the last few years. He had told me how he would love to have custard again. Baked Vanilla Custard like his mom (my grandma) used to make. He asked if I knew how to make it, and I told him that I was sure I could figure it out. I told him I would make it for him someday.

About a month before he died, I was working on a Family Recipe Shadowbox craft project. I called my Dad and asked him, “what was the best thing your mom cooked?” He said the custard, which she made in individual cups. And Nestle Toll House Cookies too (although he hated the time she got “creative” with them and added walnuts). Once again, I told him I would make it for him someday.

Soon after this conversation, we talked again and my Dad told me that he had just made vanilla custard HIMSELF. He found an easy recipe and did it. This was a huge shock and surprise. After all these years, he made it all by himself?? I was sad that I didn’t make it for him, but I was so proud that he actually made it.

After he died, I flew out to his home in Virginia to deal with everything. One of the things I had to do was packed up and clean his house.

While cleaning the kitchen, I found a recipe for Vanilla Custard, cut out of a foam egg carton. 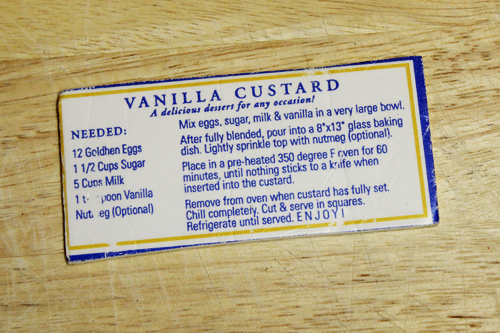 I held that recipe like it was a prized jewel. I don’t have any recipe cards from my Dad, but I had this little piece of egg carton that told a story just as special. While this wasn’t the recipe that he grew up to love, I knew that this was the easy Vanilla Custard he made.

When his birthday started to get closer, I thought of making a birthday cake to celebrate his day. But, I knew that the best thing for me to make today was that Vanilla Custard. Finally, I would make it for him, with the recipe he shared after he was gone.

Today, I share Easy Baked Vanilla Custard for my Dad on his 65th birthday. I’m sad that he couldn’t be here to enjoy it with us, but I do know that he would have loved me sharing this story, and “his” recipe, with you all.

An easy baked vanilla custard recipe that I made in honor of Dad.

-I altered the original recipe slightly by increasing the vanilla extract and adding the salt. I also rewrote the instructions.

–I’ve called this recipe easy as it doesn’t require heating or scalding of milk and you don’t have to temper the eggs with the milk. It’s a simple mixing of the ingredients and baking in the oven. 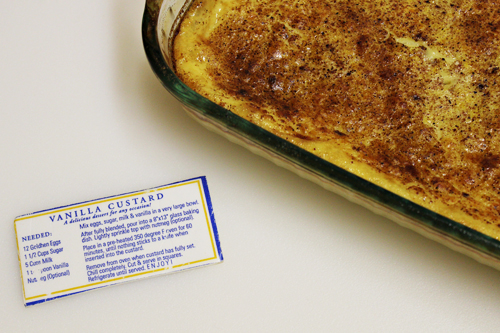