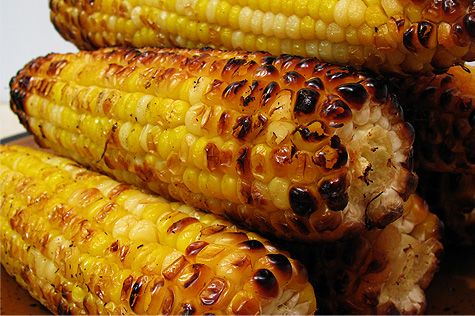 Many years ago, while having a barbecue at the home of a friend, David and I were introduced to grilled corn on the cob. It was prepared by pulling back the husk, removing the silk, and rubbing the cob with butter. The husks were pulled back to cover the corn once again and the husk-covered corn was grilled directly on the heat.

It was delicious – but then again, buttery corn is a huge weakness for me.

Over the years, I’ve attempted make corn like this. And, I’ve failed every time. Laugh if you must, but I’m just NOT good at the whole “cook the corn in the husk” thing. I think I must get a little rough with the corn because I almost always end up pulling off too much of the husks. Leave it to corn to have me feeling inadequate. So, for now, I’ve given up trying.

My no-fail version soon became corn on the cob wrapped in foil. I would shuck the corn, remove the silk, lay it on a piece of foil, rub it with some butter and sprinkle with salt and pepper. Roll it up in the foil and grill it. It’s great too – and easy. I (pretty much) can’t screw it up.

However, recently we decided to try something new. How about grilling the corn, directly on the heat, no husk, no butter? Well, this is what we did and it was SO easy. But, easy or not, I really love how the corn tastes when it’s actually grilled directly on the heat, especially when the kernels get a bit charred (those are the best parts).

The results from the family: David was a big fan of it as well. The kids all liked the corn (most gave it a nice, big pat of butter), including Lil D who doesn’t usually eat it. He did say “this corn is more….tough….than usual, why?” I don’t think it was necessarily “tough” in a bad way, it just wan’t falling off the cob like when I boiled the corn on the stovetop or when it’s cooked in butter in the foil.

There really isn’t a “recipe” to give you for this grilled corn, but I can give you a bit of instruction, which I learned from the How To Cook Everything app.

First, heat your grill to a medium-high heat. Then, shuck the corn and remove all of the husk and silk threads.

After shucking the corn, I usually give it a quick rinse with water and if the top tip/end of the corn isn’t pretty, I sometimes cut it off. Place the corn directly on your grill racks. Turn them occasionally, for about 10-20 minutes, or until many of the kernels are lightly browned or slightly charred. Remove from heat and serve with salt, pepper, and butter, if you wish. That’s it! Super easy. 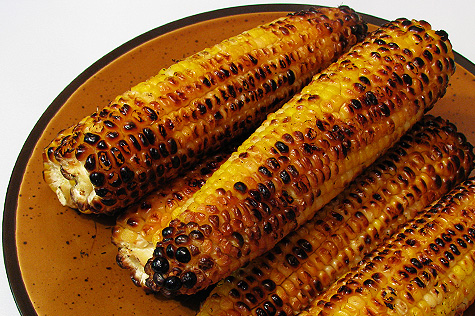 I’m not done trying the whole “grill it in the husk” thing. I’m sure I will try it again. But for now, this will do just fine.

I’d love to hear from you – how do you usually prepare corn on the cob?