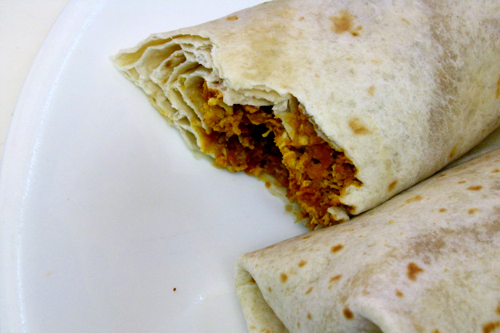 In our home, breakfast burritos are a common meal in the morning. One of my husband’s favorite ingredients for them is Mexican chorizo (it’s a spicy sausage). The last time we had chorizo and egg breakfast burritos was Summer 2010 when we stayed with my brother and his wife. My brother loves chorizo and eggs too, so we had it a couple times while we stayed there. I remember eating my burrito and grease started running down my hands and wrists. Yes, there is that much grease in it that it would do that.

Despite the grease, it WAS good. Sometimes greasy things can have that effect. But, all that grease means it’s not the healthiest stuff and that was the last time we had it. 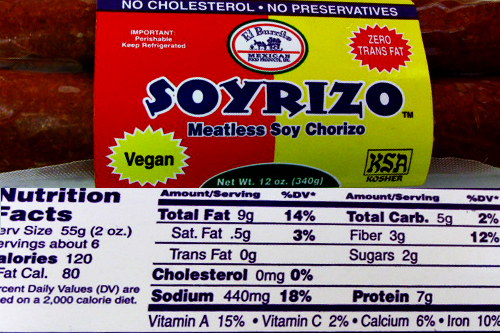 Until now. Well, sort of. We actually found a good alternative. While shopping at Fresh & Easy, I noticed in the produce section that they had a product called Soyrizo – a meatless chorizo. The price was a bit more than a package of regular chorizo, but considering that the label showed it having much less fat than traditional chorizo, I was interested. I asked David is he was willing to give it a try and he agreed, so I bought a package of it.

The taste was great and I particularly liked that it wasn’t greasy. David was very happy too. He really liked that there is a healthier option available so he doesn’t have to totally give up that chorizo flavor.

Rather than share a “recipe” for soyrizo and egg breakfast burritos, I’m going to give you some basic instructions:

1. In a bowl, beat your desired amount of eggs. I did about 8 eggs for this one package of Soyrizo, but you could easily do more or less. I add a splash of milk to my beaten eggs. 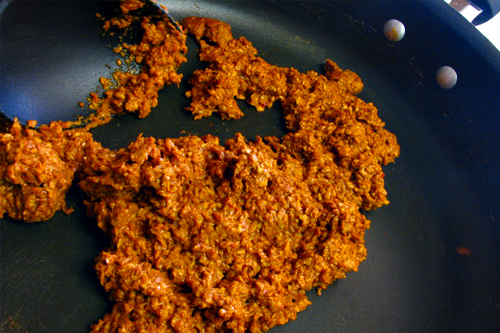 2. In a frying pan, heat up just a tablespoon or so of oil or butter. Add the Soyrizo to your pan by squeezing it out of the casing. Cook it over medium-high heat in the same manner as you might cook ground beef. Cook until browned. 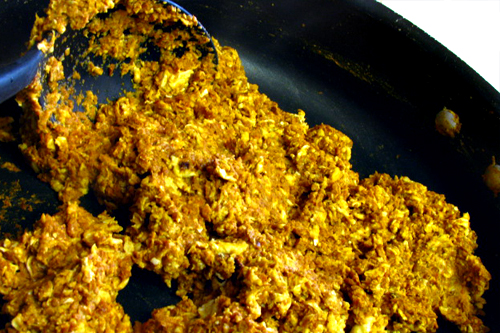 3. Pour your beaten eggs directly into the pan with the Soyrizo. Cook the eggs, combining it with the Soyrizo, stirring and folding the eggs frequently. The more you stir/fold your eggs, the smaller the eggs pieces will be. If you do it less, they will be larger, so it depends on how you like your scrambled eggs. Cook until the eggs are firm, but still slightly moist. 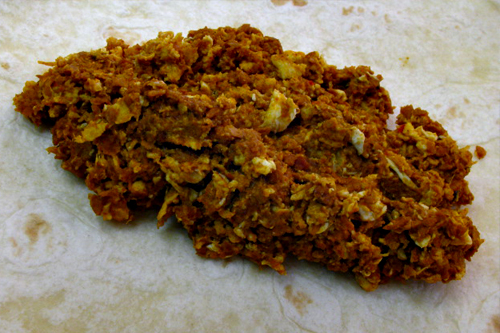 4. Heat flour tortillas as desired, the place on a plate. Spoon the Soyrizo/egg mixture into the middle of the tortilla in somewhat of a line. You can also add cheese, salsa, whatever you would like. I added a Laughing Cow Light Cheese Wedge, but you can’t see that in my photo. Then, fold up your tortilla around your filling (fold opposite sides in first, then fold and roll the other sides).

And that’s it — an egg and Soyrizo burrito. No, it’s not the exact same thing as egg and chorizo, but it’s close enough for us and a healthier choice.