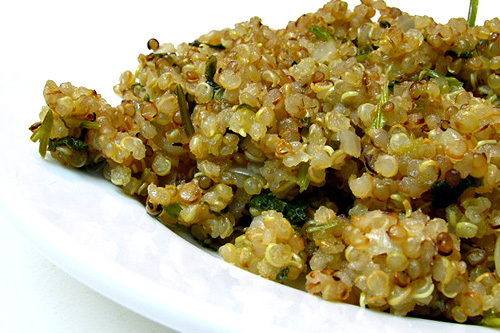 In September, David, Mattie, and I went to the “Not Back to School Party”, hosted by our local homeschool group. It was a potluck and everyone was encouraged to bring something to share with the group.

While there was an assortment wonderful things – pasta salad, fruit, chips, and more – there was one item that particularly interested me. It was a cold dish made primarily with quinoa (pronounced keen-wah). The mom who brought it said she found it on the back of a box of Trader Joe’s guinoa? Or maybe it was from Whole Foods? In either case, I had heard of guinoa, but never tasted it, so I was eager to try it out. David and I both had a serving (or two), and we enjoyed it very much. The quinoa itself was quite a bit of different than anything I had ever had. Very light and delicate, with a unique texture.

I knew I wanted to make my own quinoa soon, but it’s taken me until now to actually do it. While visiting Town Square this past week, David and I went to Whole Foods this past week and I picked up some in the bulk bins and was pleasantly surprised to find that buying it in the bulk bins was much less expensive than even buying a box of it as Walmart. Yay!

During my internet travels this past week, I found a recipe for Quinoa with Latin Flavors at Eating Well. It sounded like the perfect recipe for my baggie of guinoa, and a nice companion for the chicken enchiladas I was planning.

There was two important things I did with the quinoa. One, is that I toasted it in a dry pan on the stove. The second thing I did was that I rinsed the quinoa to remove the saponins. It is my understanding that boxed varieties are pre-rinsed, but I was concerned this wouldn’t be the case with the bulk bin quinoa, so I was sure to give it a good rise. Even with these two steps, I found it to be very simple to cook and prepare. 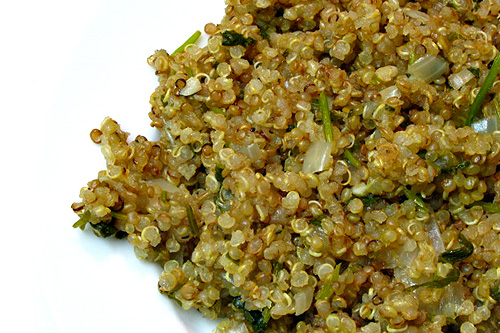 Overall, David and I think this recipe turned out great. I really loved how the lime and cilantro tasted with the quinoa and it was a nice change from my usual Spanish Rice side dish. But, while we enjoyed it, I must be honest and tell you that it wasn’t as popular with the rest of the family. All of the kids (ages 20, 18, 13, and 10) tried it, but didn’t care for it.

That’s okay though…I had a feeling it wouldn’t appeal to them. I’m already looking for some other quinoa recipes that they might enjoy more.

If you are interested in this Latin inspired recipe, you can find it here: Quinoa with Latin Flavors.

Note: I prepared the Quinoa with Latin Flavors recipe almost exactly as listed on the Eating Well site, expect I didn’t add the pepitas. With these excluded, the recipe had a Weight Watchers 3 Point Plus value for a 2/3 cup serving.