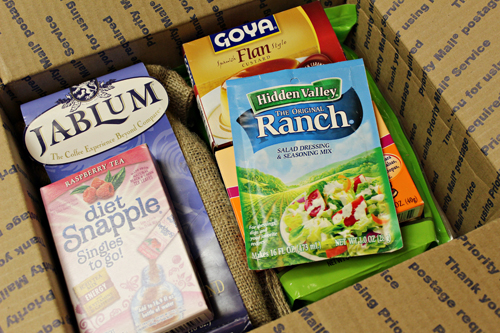 I love getting packages in the mail.  To feed my need for packages, I joined up with Foodie Pen Pals for the first time. I loved the idea of getting a surprise foodie package in the mail and I thought it would be cool to put one together for someone else.

The way the Foodie Pen Pals work is that someone send you a package and then you send a package to someone else. I received a package from Sandy of Chicas on a Mission and I’m I’ve been anxious for October 1 to get here so I could share it with all of you.

After I opened the box, right on the top, Sandy included a note that explained why she included all of the items she sent. I LOVED this special touch and reading all the details made the box even more special to me. 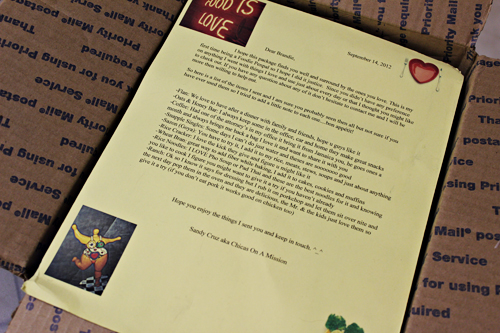 She sent rice noodles because she loves Pho Soup and Pad Thai. I’ve never made either, but I would love to try my hand at making them. She also sent coffee from Jamaica! We are major coffee drinkers, but never had Jamaican coffee, so this was a really fun treat for us. It even came in a burlap bag, which I have save and will probably make an appearance in a future food photo. Oh, and she sent wheat bran too. I could tell  that her Chicas on a Mission blog was a lot about becoming healthier, so I was happy to receive something that I could use just like Sandy does to add fiber to my baking. 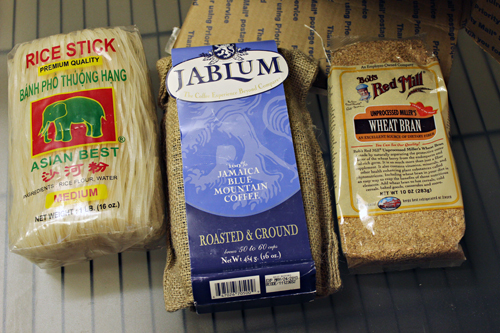 Sandy included two Goya products: sazon (which she adds to rices, stew, and soups) and flan. I’ve heard a lot of good things about Goya products, but I don’t believe I’ve ever purchased them, which is probably weird since I love to Mexican food. She also included Nature Valley Crunchy Oats ‘n Honey bars. I don’t think she knew this, but this is one of my absolute favorite granola bars too.

She included a packet of Hidden Valley Ranch dressing and gave me a great meal idea: rub the packet on pork chops, let them sit overnight, and the next day you bake them. She said they are delicious and I can agree that they sound great. I plan to make exactly this the next time I made pork chops.

There was also a pack of Diet Snapple Singles to Go to add to my water (or shall I say, Mattie and Courtney’s water since they have been snagging them) and rice crackers (which we’ve already finished off while watching the movie Cabin in the Woods the other night). 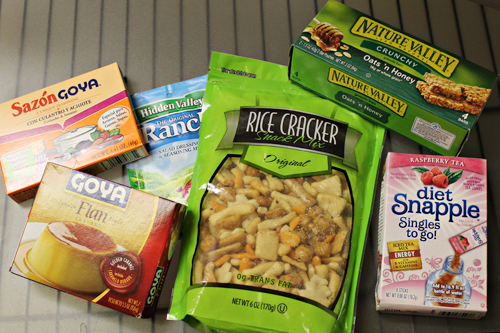 I totally loved my Foodie Penpal package and all the thought that Sandy put into it. If you are loo

I was assigned to send a package to Timothy, so I took a visit to a place that I knew I could get cool local foods at: Whole Foods. I put together a box of items made right here in Las Vegas, Nevada. It included: Julie Anne’s Sweet Citrus Granola, Paymon’s Fries and Dip seasonings, and Dave’s Fabulous Las Vegas Barbecue Sauce. I was SO worried that the barbecue sauce glass bottle would break, so I packaged it all up the best I could, included a handwritten note with some foodie themed stickers for Timothy’s daughter and axiously waited to here from him.

With a couple days, I got his email saying that it was awesome!

I have a great time with my first Foodie Pen Pals exchange and am signing up for October too. If you’d like to join, you can! Just go to this page to get all the details and to sign up: http://www.theleangreenbean.com/foodie-penpals/ 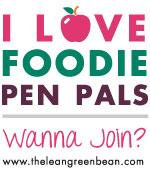