This Buffalo Chicken Panini Sandwich recipe is a triple combo of awesome! If you love buffalo chicken wings, cheese, and sourdough bread – this is the sandwich for you! 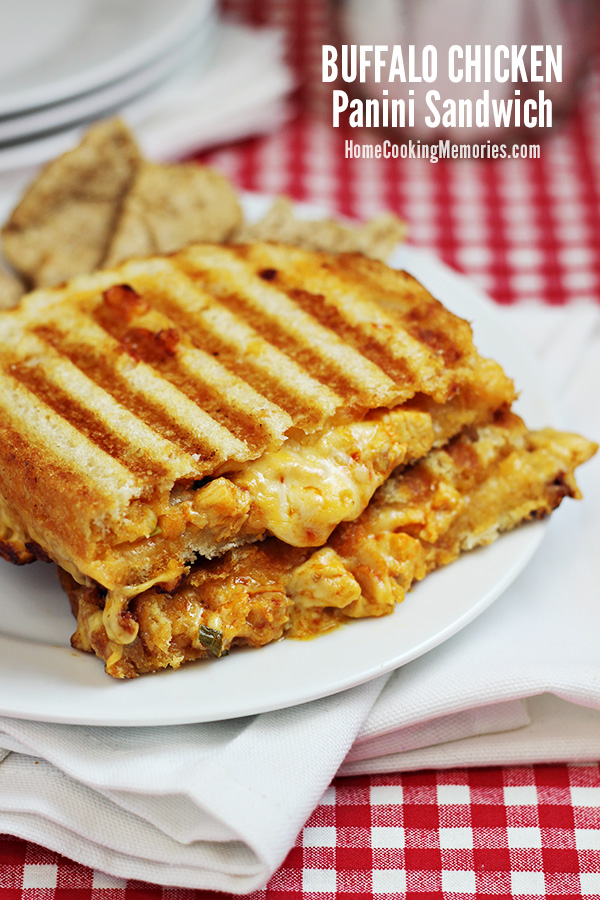 Disclosure: I am a member of the Collective Bias®  Social Fabric® Community.  This #CollectiveBias shop has been compensated as part of a social shopper amplification for Collective Bias and its advertiser.

I broke out the panini maker again! We are having so much fun making them that I’ve rearranged a shelf so I can get the panini maker out easier (it was such a pain before). One thing that I think is cool is that the kids have started making their own creations. They are even pulling out leftovers from the fridge to come up with some creative ideas. We could have roasted broccoli or leftover salad toppings in there and someone in our house will pull it all out and work it into a panini. Leftovers not going to waste? It’s horrible {said no mom ever}.

The Buffalo Chicken Panini I’ve made didn’t use leftovers, but it certainly could if you had some leftover chicken and cheese. I actually didn’t have any of the ingredients at home, so I had to go shopping. First stop was to Smith’s (Kroger affiliate store), which I like to stop into about once a week for items that they have on sale (plus I get points for discounts on my gas when I shop there). I picked up fresh chicken breasts (on sale), cayenne hot sauce, sourdough bread, green onions, blue cheese, and colby jack cheese. One thing they didn’t have was Star Butter Flavored Olive Oil which I wanted to use for both cooking the chicken and for brushing on the bread. 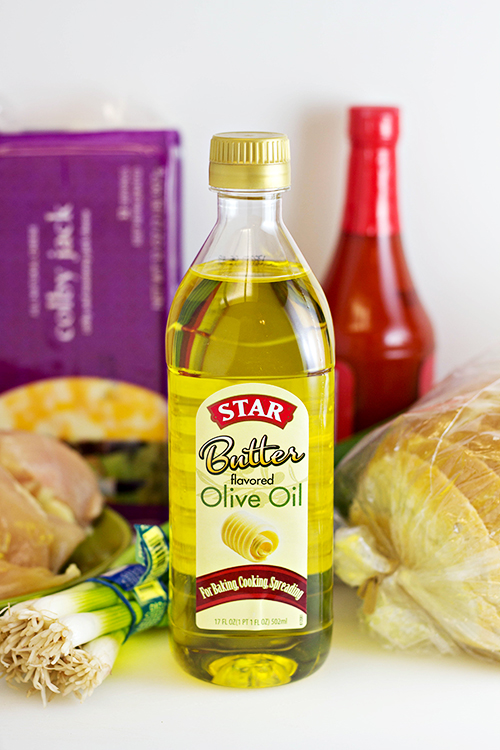 When I make buffalo wings, I usually add a bit of melted butter to the hot sauce that I toss the wings in. Rather than going that route, I used the Star Butter Flavored Olive Oil to help to give that buttery taste to the Buffalo Chicken Panini. I was able to buy it at Walmart, which I’ve learned is the only place that carries it. I found it up on the top shelf near the other olive oils. My Walmart sold it for $4.98. 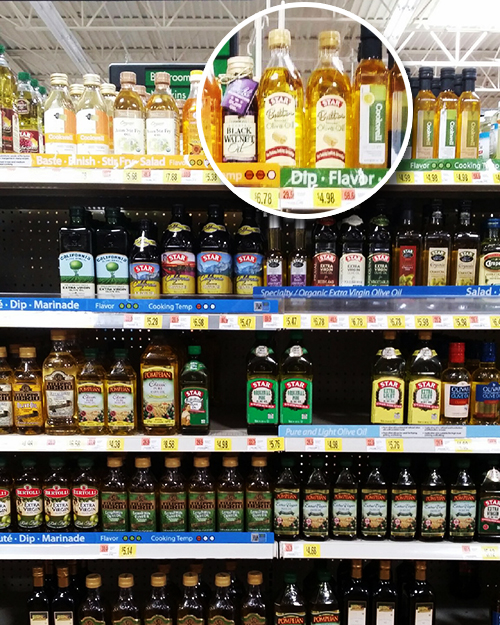 Once you have all your ingredients, you are ready to get busy on your dinner. Or lunch. Or midnight snack. It was dinner for us, but who am I to judge? I believe in equal meal opportunities for sandwiches. Heat up a bit of the Star Butter Flavored Olive Oil in a frying pan and cook your chicken breasts until golden brown and cook through. 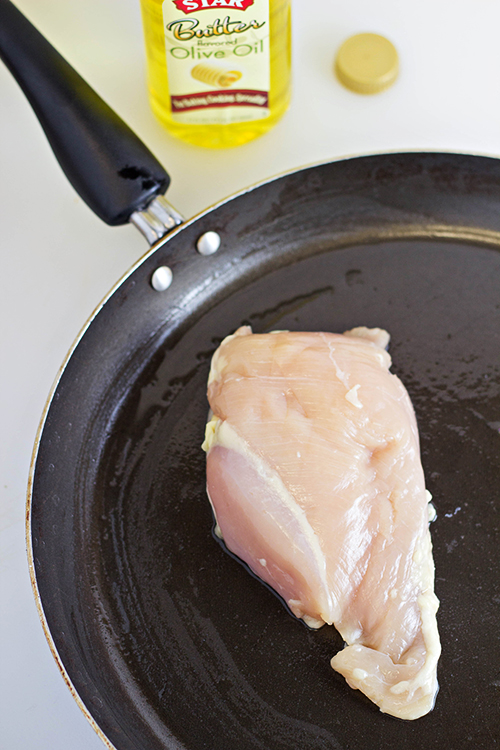 Once the chicken is done cooking, set it aside to cool a bit. When cool enough to handle, cut your chicken into little bite-sized pieces. Toss it with your cayenne hot sauce, and then blue cheese crumbles and sliced green onions. 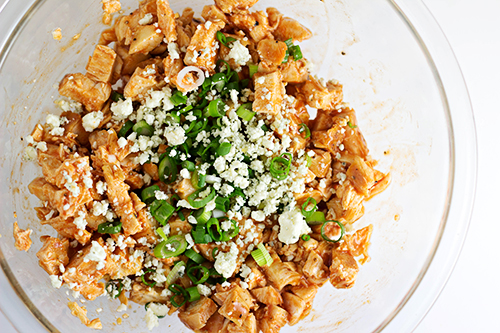 Start heating up your panini maker according to manufacturer instructions. Then, brush one side of each slice of bread with a bit of the Star Butter Flavored Olive Oil. 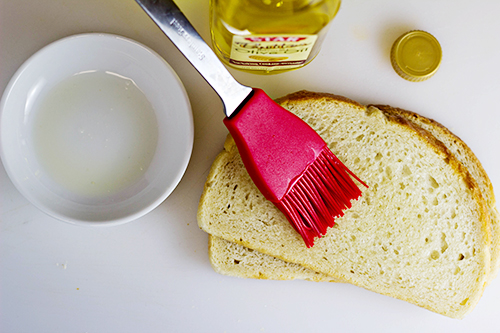 Now you are ready to grill your sandwich! Lay one slice of bread (with the olive oil side down) on the hot panini grill. Top with some shredded colby jack cheese, then some of the buffalo chicken filling, more shredded colby jack cheese, and finally top with another piece of bread, with the olive oil side facing up. Grill your sandwich until hot, crusty….and DELICIOUS! 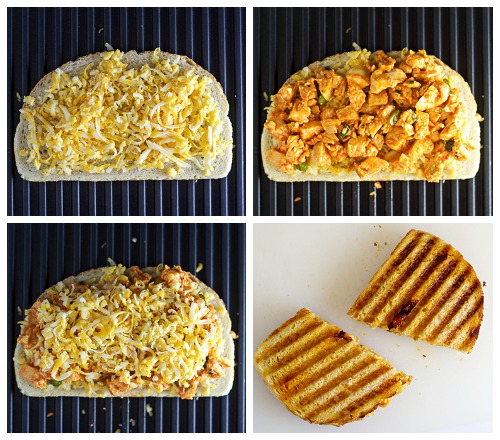 That’s how easy it is. The hardest part for me was making these for a family of six and my panini maker only have room for two at a time. Woe is me, right? We’ll manage somehow. We paired our panini with some chips and a veggie tray, which I also pick up on sale at Smith’s.

Here’s the complete recipe for you to save to your ZipList recipe box or print. If you are on Pinterest, you can save to your boards by clicking this red “Pin It” button: 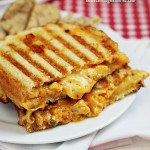 This Buffalo Chicken Panini Sandwich recipe is a triple combo of awesome! If you love buffalo chicken wings, cheese, and sourdough bread – this is the sandwich for you!

–The sourdough slices I used were large, about 5-6″ wide. If you use smaller bread slices, you may end up with more sandwiches. 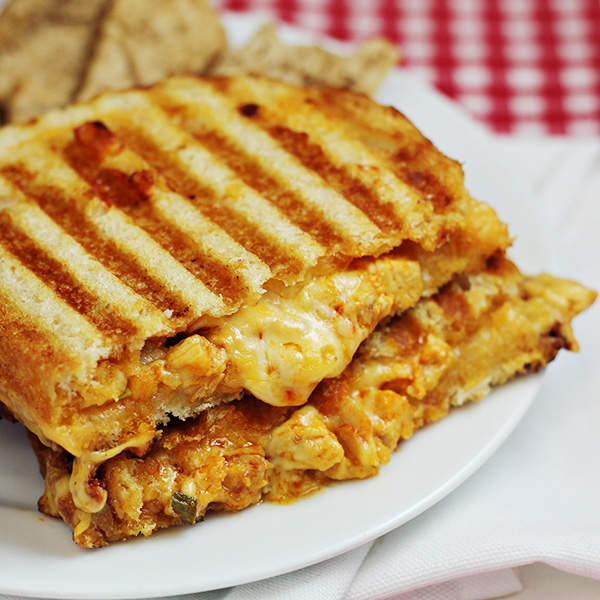