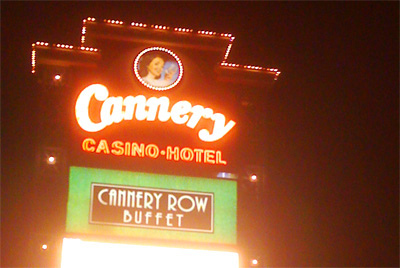 This past week we had an opportunity that seems to be more rare these days – everyone was home. This means it was both hubby and I, both of the younger kids (Mattie-9 and Courtney-13), and both of the older kids (Wellie-20 and Lil D-18) – all together, no one at work, no one out doing other stuff.

With all of us home, David and I decided to treat them to dinner out. Knowing that we needed to be as frugal as possible, we limited ourselves to a few options. In the end, we decided on trying out the Cannery Row Buffet at the Cannery Casino. This way everyone could get what they wanted, eat as much or as little as they wanted and we wouldn’t spend a whole lot.

Even thought it was a Tuesday, it was fairly busy when we arrived. We waited in line for about 15-20 minutes to pay and be seated. That doesn’t bother me though.

Our service was pretty good, especially considering that they were so busy. We received several drink refills in a timely manner and our table was cleared frequently of dirty dishes. Our server was courteous and friendly.

Overall, the food was average buffet type food, I think we all can agree that it wasn’t spectacular, but not bad either. One of the favorite dishes of the night for Wellie and Mattie was the macaroni and cheese, which I could tell was extra gooey and cheesy. Courtney was in heaven with the whipped cream – seriously, that kid goes nuts if she can have unlimited whipped cream. David enjoyed the ribs and I was happy with the fajitas.

Mattie had fun making a little hat out of one of the mini pie tins: 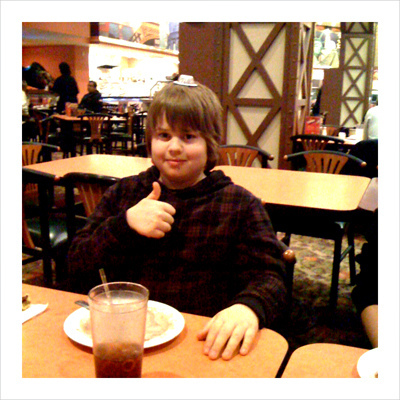 A word of caution to those who might take their family with a coupon or other discount. Being my usual frugal self, I looked prices on their website before we went and clipped a coupon from the newspaper. It was $4 off per adult buffet and it mentioned it could be used up to 4 adults. But apparently, it was $4 off for up to 4 adults if each of those 4 adults had a club card.

The oldest two kids aren’t 21 years yet, so they can’t get a card. It pretty much leaves anyone under the age of 21 having to pay their regular, full price.

So, the prices ended up being more than I originally thought. At least Courtney was able to play with her food and spell her name out of chocolate candies: 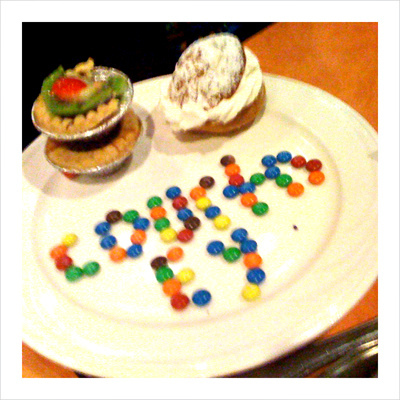 We still think the Cannery is a decent little casino off of the strip. It’s not fancy at all, very low key. It’s the kind of casino I can see my dad enjoying a lot. It does have a nice movie theater that we’ve visited many times (I would say it’s one of our favorite Las Vegas movie theaters).

One thing I particularly like is the theme at the Cannery. It’s all decorated like a 1940’s factory, sort of post-World War II feel. Lots of pretty 1940’s pin-up girl illustrations, metal can shaped door handles, and a 120-foot-tall smoke stack.

All in all, a good night as far as getting out together as a family, talking, laughing, having fun making hats out of pie tins, and filling out bellies full of food. Good stuff.