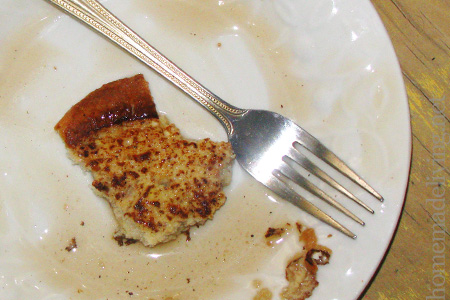 When Mattie woke up today, and as I was starting to work for the day, he came in and asked me, “how do you make French toast?”. I briefly explained the steps to him and he made a grossed-out face when he found out that the bread was dipped in an egg mixture (he doesn’t care for eggs).

He made a few other comments about French toast still being good, despite the egg part. And while he didn’t ask me to make the French toast for him, I could tell that was the underlying request. I knew this, so I quickly added, “I don’t have time to make French toast today, but we’ll do it soon.”

As soon as those words slipped out of my mouth, I felt bad. I mean, seriously, I don’t have time to make some simple French toast? He wasn’t asking for a gourmet version. He wasn’t even demanding. Geez, he wasn’t even asking (hinting around a bit, sure). But just yesterday I had read the post on CityMama about Jamie Oliver’s TED speech. I agreed with everything she said in her post and here I was the very next day telling my son that I couldn’t make him some French toast and that we would “do it soon” (do it soon = hoping you will forget about it).

So, literally in that minute I remembered Stefania’s blog post and Jamie Oliver’s wish:

“I wish for your help to create a strong, sustainable movement to educate every child about food, inspire families to cook again and empower people everywhere to fight obesity.”

I turned to Mattie and said, “You want to learn how to make French toast?”.

Of course, I got back an enthusiastic “yes” and we got started right away. Together we whisked up the eggs with a bit of cinnamon, nutmeg, and vanilla extract. I demonstrated to Mattie how you dip and coat the bread in the egg mixture. This became his job while I cooked and flipped them in the pan.

In no more than 30 minutes, we had a small plateful of hot French toast, but even bigger than that, we had fun and we were together. And Mattie learned how easy it was to cook French toast. I showed him that it wasn’t an inconvenience and something to be pushed off for “later”. I’m proud of myself for that.

And Jamie Oliver…well, I am so excited about his mission and his speech. It resonates with me. I think we all have the power to change things and I have gladly sign his petition to be a part of the Food Revolution.

For me, I’ve always been interested in food and cooking. I’ve always admired my mom’s skills in the kitchen. And while I’ve dabbled in cooking here and there, I’ve made way too many excuses over the years about why I can’t cook at home more (mostly that I was too busy). Not only can I cook at home, but I can enjoy cooking and trying new things — my greatest joy comes from experimenting with new ingredients or new cooking methods. I don’t have to be afraid if I don’t know how to do something because I can learn.

I let so many years of my life – and the life of my children – go by with nothing better than a fast food combo meal. We’ve ate it so much that I could pretty much recite the menus at every single major fast food chain. Our health and body weights shows the results of that fast food life – as does the lack of exercise and poor food choices at home. I wish I could turn back the clock, but I can’t, so I have decide to move forward. I’m making better choices now and hoping that my choices can inspire my older children as well.