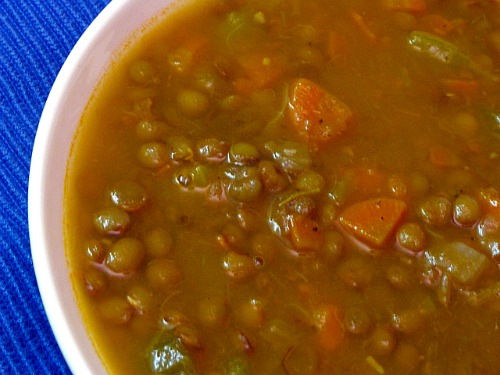 While making up my menu plan, and in an attempt to use up some of what I have in my pantry, I noticed that I had two bags of lentils. I’ve had them for a while now, so I figured: use ’em or lose ’em. I knew I wanted to do a soup with them, so I start my search for a new soup recipe to try. I wanted something low in fat and meatless — not that we don’t eat meat, but we are eating less meat lately.

I ended up deciding to make Ina Garten’s Lentil Vegetable Soup.  It made a HUGE batch. Of course, I did 2 lbs of lentils, but I realized that even 1 pound would have made a lot. So, a lot of soup for not much money. It’s hearty and DELICIOUS! The next day David and I also had it for lunch (it was even better the second day).

The only negative – there was  a LOT of chopping, but it was well worth it.

I create the recipe exactly as listed with a few exceptions:

WW Points: 4 Points+ for 1 cup (not including if you top with Parmesan cheese)

You can find this Lentil Vegetable Soup recipe here.