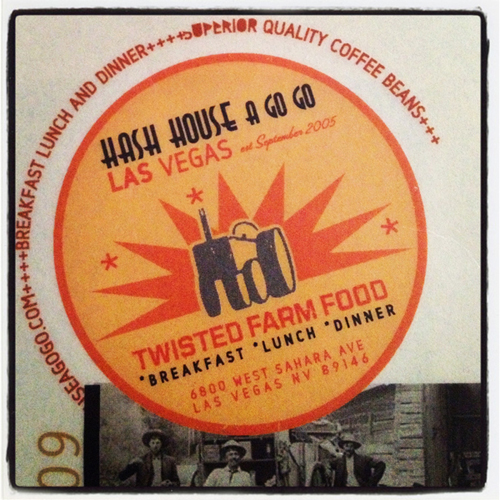 There is a lot of Las Vegas restaurants. I have no clue how many, but when you factor in everything from fast food to the fine dining, it’s a lot. I would imagine that if you ate at a different restaurant every night, it would take you several years to get through it all. And probably just when you were done, you’d have another list of new ones to start with. 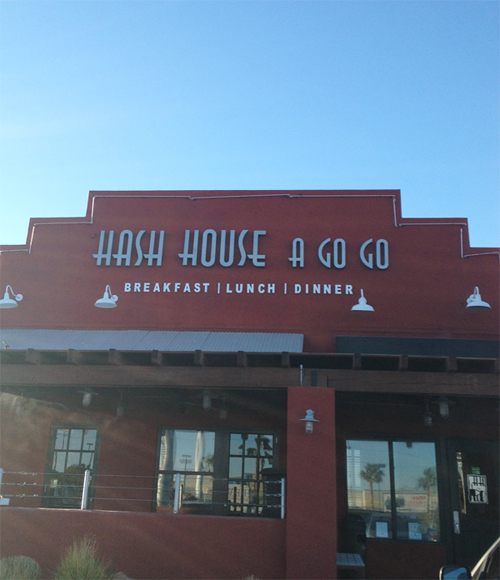 With that being said, if I go to a restaurant more than once, more than twice, there must be a reason.

Hash House a Go Go is one of the repeat visit restaurants for us.

The food is excellent, the service has been good, and this Las Vegas restaurant is just FUN. They call their food “twisted farm food” and the name matches what’s served.  They’ve even been featured on Travel Channel’s show “Man V Food” (see the end of this post for a video clip) and TV shows. It’s also a place lots of celebrities have visited. When you walk in the restaurant, the walls have autographed photos of the various celebrities (oh, Hi Martha!). 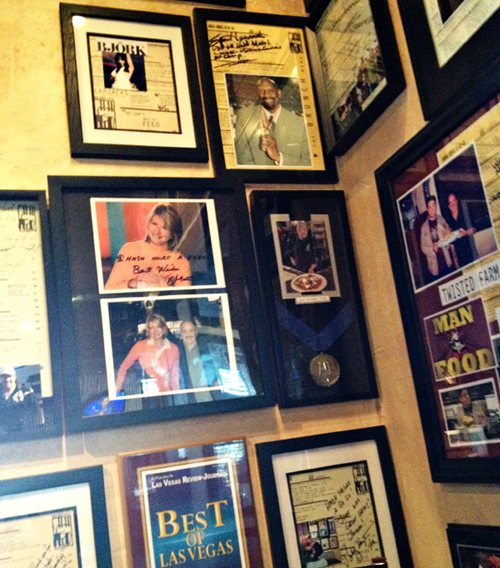 Hash House a Go Go is also known for their huge portions. Shall I show you some of their tasty offerings? Don’t worry, the calories don’t count when you look at photos.

First off, we have their BIG biscuits with a sort of honey drizzle. They are complimentary before your meal. 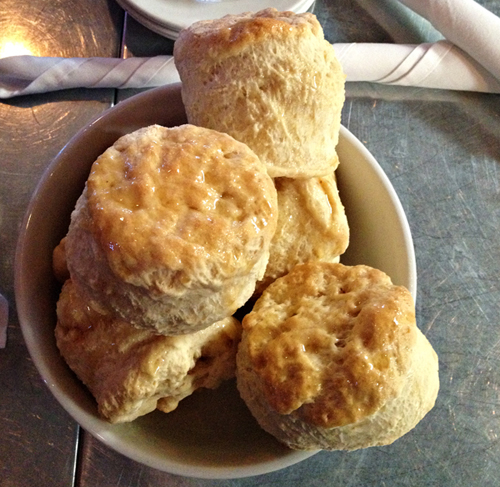 This is their famous Sage Fried Chicken and Waffles (it’s a New York Times favorite!). The chicken is amazing! The waffles are good too, but the chicken is the best part to me. Right inside of the waffles is hardwood smoked bacon and it’s all served with a hot maple reduction. You know what I like on it too? The fried leeks. 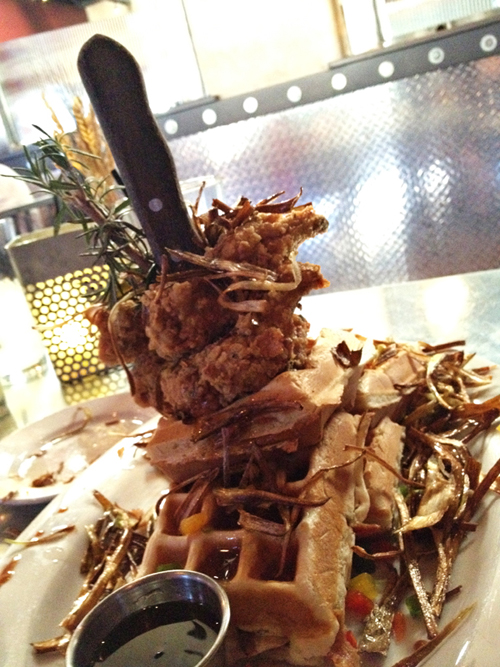 The first time we ate at Hash House, David and I both ordered this and we ended up taking home half of our meals and eating them the next day. Another time we went, Mattie and Courtney shared a plate of Sage Fried Chicken and Waffles and even with them sharing, they couldn’t finish it. 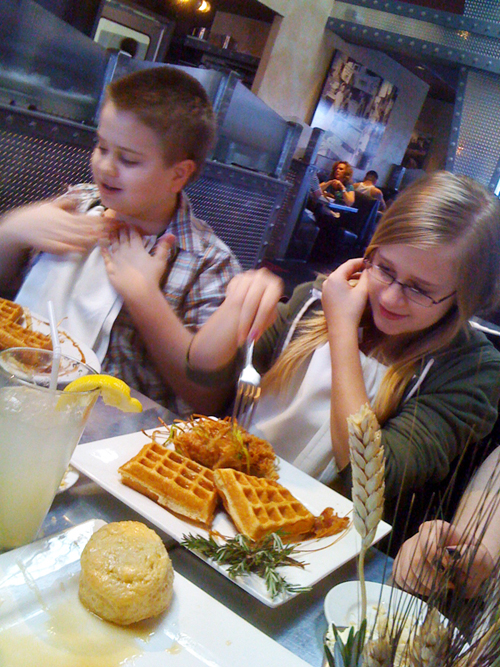 That colorful drink behind the glass of soda is Wellie’s favorite and she get’s it every time she goes. It’s a a Kiwi Watermelon Lemonade, served with a watermelon wedge right on the glass. 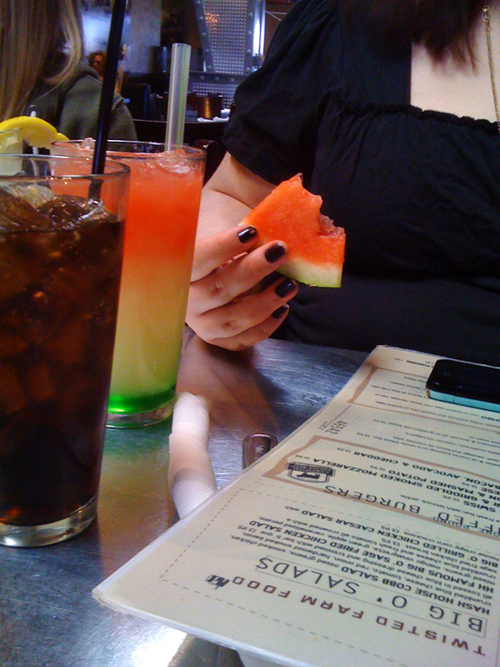 Here’s one of their salads — the HH Famous Big O’ Sage Fried Chicken Salad. David and my friend, Valerie, got this on on one our visits. It comes with mixed greens, mango vinaigrette, green apple, caramelized pecans, crumbled blue cheese, tomatoes, and a sage fried chicken breast.

I don’t think this photo even does justice without how huge it was. When they say it’s a big o’…it’s a big o’ bowl. And, yes, that’s spaghetti noodles on top. Deep fried. I like those too. 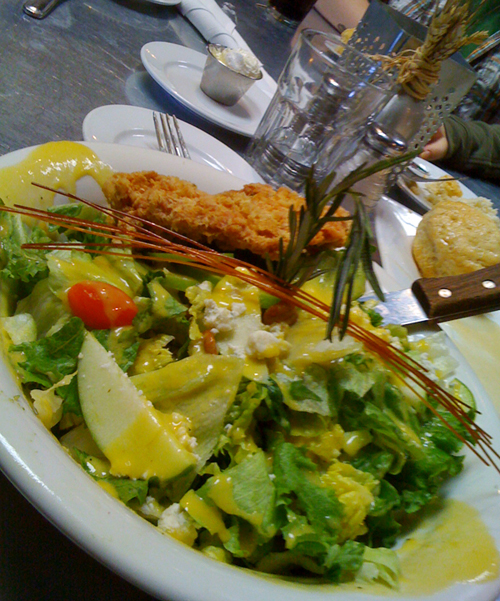 One of the kids’ favorite things on their menu is their Stuffed Burgers. Basically, they are two patties with something the middle, like cheese and bacon. If you like big burgers, you really should try one of Hash House’s. 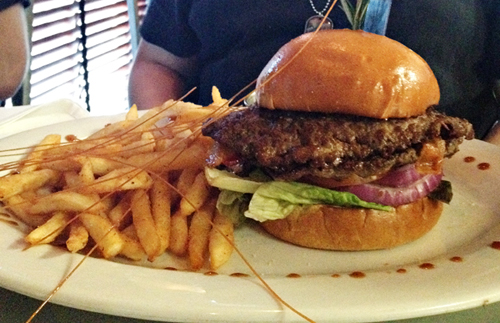 This is their Stuffed Meatbloaf. Same concept at the burgers, but in meatloaf form. This is what I had on one visit and the meatloaf was really good. It has fresh spinach, roasted red peppers, mozzarella cheese, Marsala cream sauce, and griddled mashed potatoes under it all. 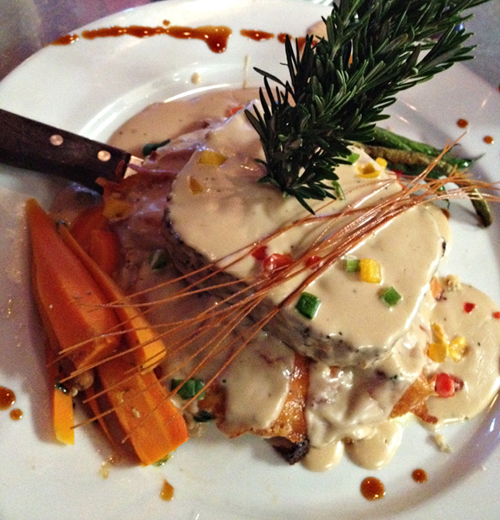 Here’s a video from the episode of Man vs Food with Hash House a Go Go in Las Vegas, which shares one of their breakfast specialties: Sage Fried-Chicken Eggs Benedict

So, yeah, we are Hash House a Go Go fans. If you are in Las Vegas and wanting to try a Las Vegas restaurant that is different, you can find Hash House a Go Go in several locations, such as at the M Resort, The Plaza, and one at Imperial Palace. We usually visit the location on West Sahara.

To get a complete list of their locations, visit: http://www.hashhouseagogo.com/location/

Note: This post is not compensated or sponsored. All meals were paid by us.