Portobello Tuna Melts are a healthier version of the old-school tuna melts you may know. This healthy tuna recipe features a no-mayo tuna salad and a portobello mushroom cap as a base, instead of bread. Tuna Melts were one of those meals I had a lot as a child. They were inexpensive, easy, and my siblings and I gobbled them up. My Dad did a lot of the cooking and this was one of several specialties he had.

Like many old-school tuna melts, my Dad’s were on white sandwich bread, had plenty of mayo (and pickle relish), a piece of American cheese, and the cheapest tuna he could buy. While my Dad’s tuna melts have a special place in my heart, I wanted to create a healthy version of a tuna melt — as healthy as I could get it.

The changes I made created a tuna melt that was entirely different than what my Dad ever made. But, while I made it, I was thinking of him the entire time I made it. He was my inspiration and even though I changed up, my food memories were as strong as ever.

The tuna I used for my Portobello Tuna Melts is Ocean Naturals Premium Tuna, which is sustainably and ethically caught. I’ve never purchased Ocean Naturals or any other brand of tuna like this, so it was a totally new experience for me. The tuna I usually buy? The one with the lowest price tag. But, I’m looking for small ways to live more responsibly and I see changing up my tuna as an excellent “baby step”. 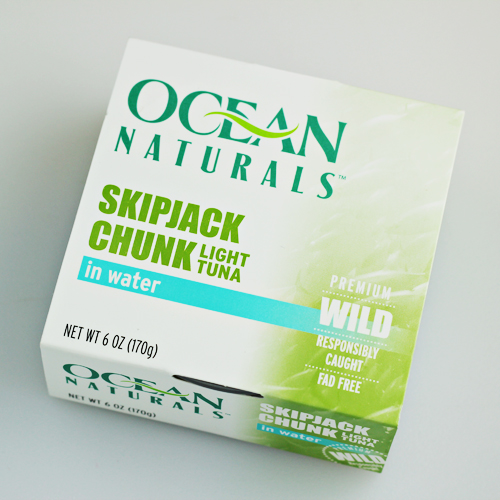 One of my favorite parts of their website is their Where Did My Tuna Come From?” search feature. You can find out where your Ocean Naturals tuna comes from just by entering the code on your can. I learned that the cans I bought were caught by Capt. Louis Machado, plus lots of other info about my tuna. Pretty awesome, right? 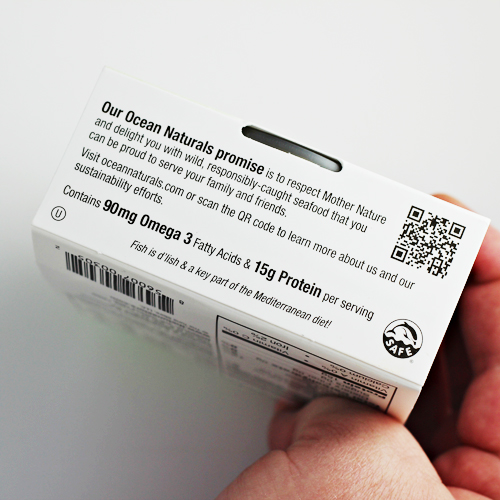 Fish is so nutritious, which is one of the reasons my family and I enjoy eating it.  As we’ve continue to increase the healthy meals that we cook in our house, fish is being used more and more. I was pleased that Ocean Naturals tuna was simple — just premium tuna with a bit of salt and water (or olive oil for some varieties). Nothing else. 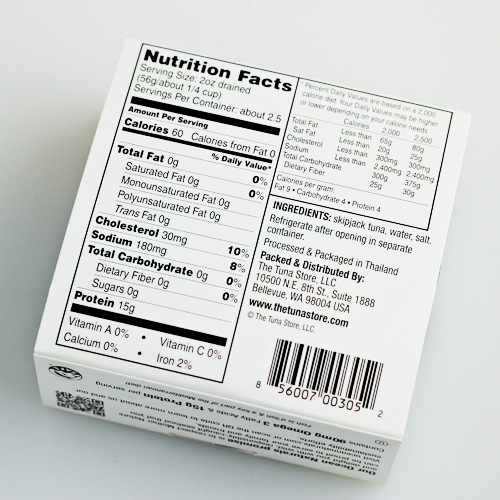 It was pretty clear to me that Ocean Naturals was good for the planet and good for my family and I, so I was very curious how much it was going to cost me. I was very pleased to find that my local Walmart sells it for only $1.97, which was much less than I thought it would be. 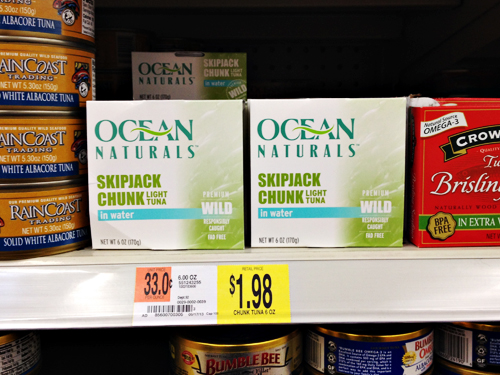 These Portobello Tuna Melts are quick to prepare and easy. There is no mayonnaise and bread, which makes these light and perfect for a healthy diet. I use one thin slice of Swiss cheese, which gives you just enough to make it like a traditional tuna melt, but also saves you on fat and calories (it could also leave it off, if you prefer).

The Ocean Naturals tuna was excellent — I stole a few flakes of it before mixing up my tuna salad and I was really happy with how it tastes and how flaky it was. When I drained it, I was really pleased to not find the “mushy” tuna I find with some of the cheap brands I usually buy.

The tuna salad used for these Portobello Tuna Melts is loaded with flavor. The ingredients are simple: Ocean Naturals tuna, celery, red onion, banana peppers, lemon juice, a bit of olive oil, and salt and pepper. All of this is mixed up creating a fresh, mayo-free tuna salad. 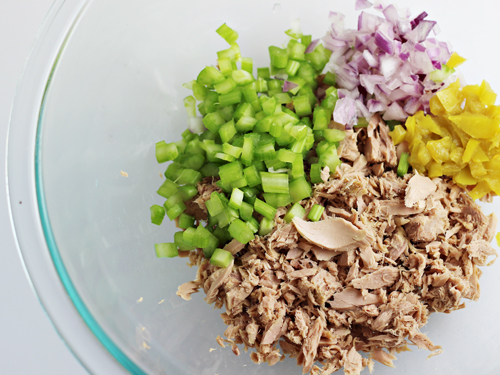 The base of the tuna melt is large portobello mushrooms. I packed the tuna salad into two large mushroom caps (about 4 oz each), which created two servings. I do think the tuna salad could be split into 3 mushrooms, if you wish, but I liked the generous servings it created with two.

To prep the mushrooms, you’ll need to clean them and remove the stem and gills, which I did with a spoon. The mushrooms are brushed with a small amount of olive oil on both top and bottom, and baked in the oven for 5-10 minutes until tender. Mushrooms tends to release quite a bit of water, so be sure to drain off any that is left on your baking sheet after they are done baking. 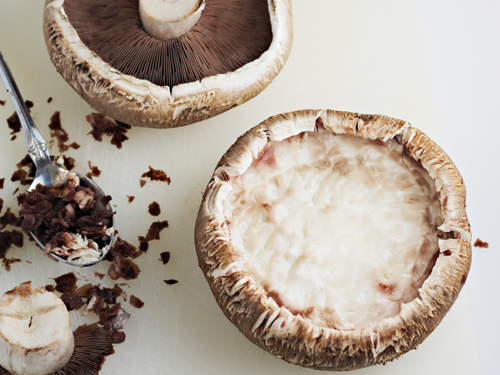 The tuna salad is divided and stuffed into the tender mushroom caps. Just looking it makes me want one right now! 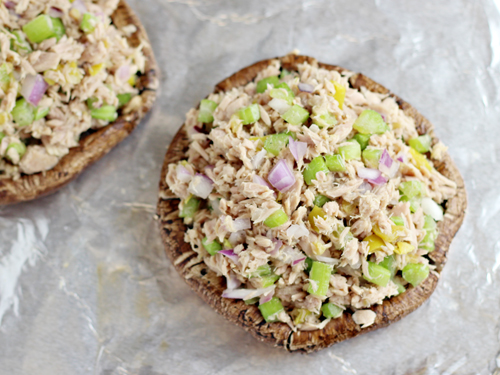 I topped our Portobello Tuna Melts with a slice of ripe tomato. Then, it was topped with a thin slice of Swiss cheese. Alternatively, you could sprinkle some shredded Swiss on top. 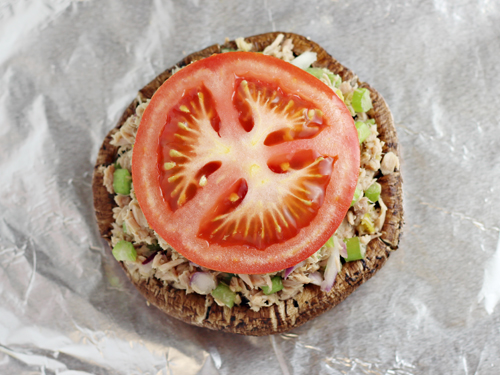 They are baked in the oven (or broiled) until the cheese is melted. I like to serve right away on a bed of spring greens and/or baby spinach, which gives this meal even more freshness. While it might be light in calories and fat, it’s hearty and filling — you’ll want to use a fork and knife. 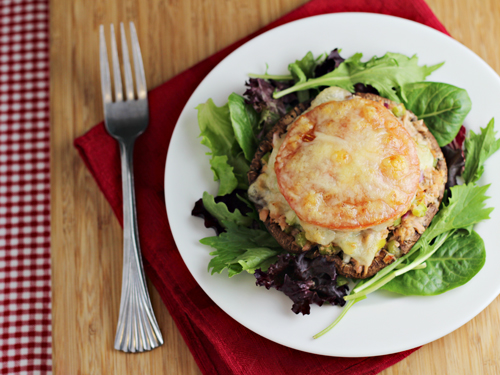 Here’s the full recipe — it’s ready for you to print or you can save it to your ZipList recipe box:

Portobello Tuna Melts are a healthier version of the old-school tuna melts you may know. This healthy tuna recipe features a no-mayo tuna salad and a portobello mushroom cap as a base, instead of bread.

And since I know so many of you love winning free stuff, visit the #OceanNaturals Facebook page, where you’ll find Ocean Naturals Tuna Tuesdays — they are giving you a chance to win free tuna! 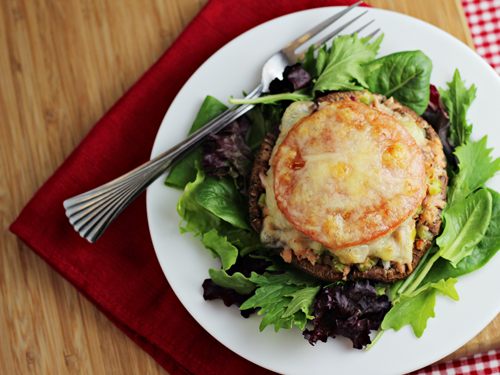 Check out these recipes on Pinterest for more awesome ways to use Ocean Naturals Tuna: