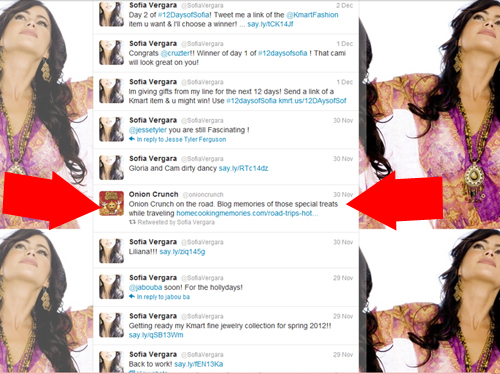 This is a story about the day that Sofia Vergara tweeted about my blog.

And this is a story about how I almost missed it.

But, let me first make sure that you know who Sofia Vergara is. She plays the beautiful Gloria Delgado-Pritchett, wife to Jay and mom to Manny, on the hit ABC TV show, Modern Family. We didn’t watch Modern Family when it first premiered, but after hearing so many great things about it, we caught up on all the seasons about a year ago and now we are sure to watch every episode. Our whole family loves it.

Anyway, onto my story… 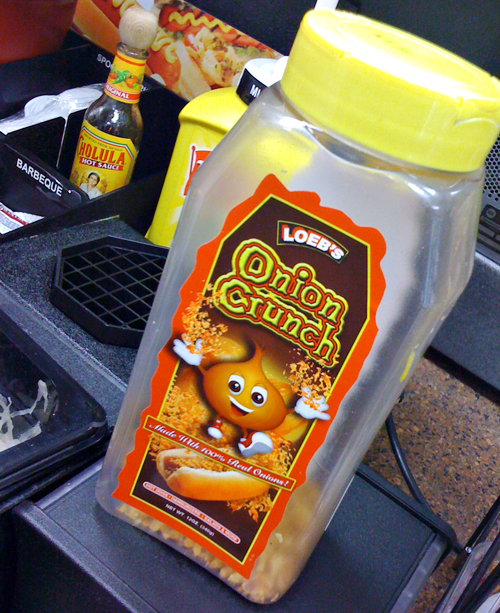 Back in November, I did a blog post about Loeb’s Onion Crunch — which are these yummy fried onions in a shaker bottle. You can read the entire post here.

Shortly after my post went live, the president of the company, Nick Loeb, wrote me directly. He told me I had a fantastic blog and about how Onion Crunch was a small start-up company and he thanked me for sharing them. He also mentioned that he would have his girlfriend tweet about my blog (he mentioned that she had over a million Twitter followers).

I wrote him back — I was very appreciative and thought it was cool to hear from him. I had no idea who his girlfriend was, but I’m always happy with anyone tweeting about Home Cooking Memories (even if they don’t have a million followers), so I said thank you and told him that I was happy to post about Onion Crunch because I really did love the product.

At some point in November 2011, I had a BIG traffic surge on my Onion Crunch blog post. I was really happy with the traffic and thought, wow…people really have an interest in this Onion Crunch product! I didn’t think much else about it.

A few months passed. In March 2012, I was on Facebook and the Onion Crunch page posted. And I read the names: Onion Crunch + Nick Loeb + Sofia Vergara. 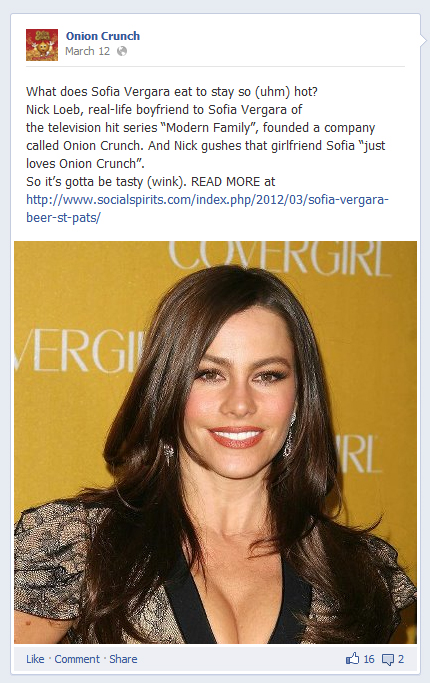 My mind started racing…was this the “girlfriend” that would tweet about me? I remembered the huge surge in traffic, could that have been why?

I rushed and told my husband and our daughter. Wellie immediately went through Sofia’s twitter feed. She had to keep scrolling back, but then she saw this:

How awesome is that? I can’t believe it took me so long to make the connection, but I just didn’t know who Nick Loeb’s girlfriend was! Of course, now I do and I had to share the story with all of you. Who would have thought that a post about fried onions would end up getting me a tweet by a popular actress?!? I never would have imagined it, but now I’m on a quest to get more stars to tweet me…as soon as George Clooney does, I will be sure to let you all know!  😉