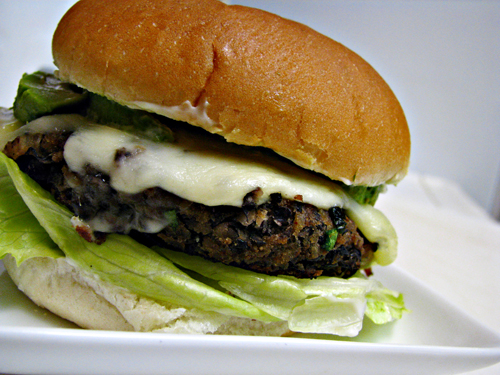 I’ve mentioned before that my mom used to make lentil burgers. A lot. Well, maybe it wasn’t as much as I am remember…you know how everything always seems so much bigger when you are a kid? My memories are probably a bit distorted, but it did seem like she made them all the time. She was the (almost always) vegetarian in our home, so she would make them just for herself and us even though she hardly ever tried to get us kids to eat them, we were always sure that they were gross.

It’s funny how your tastes change as you get older. I can recite this story for so many other foods and dishes. But, today, I would say that a burger made with beef or turkey is my first choice, but one that is vegetarian is not far behind in what I crave.I’m also not alone in this – David will gladly eat a burger of whatever kind and the kids mostly will too. It’s good stuff and makes eating healthier a bit easier when there is meatless meals we can all eat.

With all this talk about lentils, you would think I would be making a lentil burger, but no. This post is about black beans and making a spicy black bean burger, which is something else I wouldn’t have wanted to eat when I was a kid. But now? I love a good meatless burger. 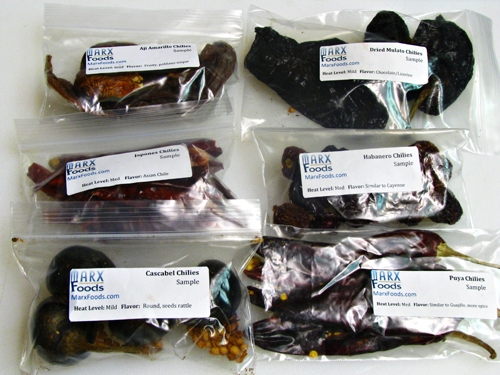 Recently I was invited to participate in a recipe contest. The challenge was to create a recipe, using dried chilies, from Marx Foods, sending me free samples of the dried chilies that they sell. This was a an easy decision for me: 1) after making homemade enchilada sauce with dried chilies, I’ve wanted to experiment more with cooking with dried chilies; 2) I’m always up for a good cooking challenge; and 3) I have a chance of winning products from Marx Foods (I get excited just looking at everything they offer on their site). I told them that I would be happy to participate and shortly after, I received an assortment of chilies: Cascabel Chilies, Puya Chlies, Habanero Chilies, Mulato Chilies, Japones Chiles, and Aji Amarillo Chiles. 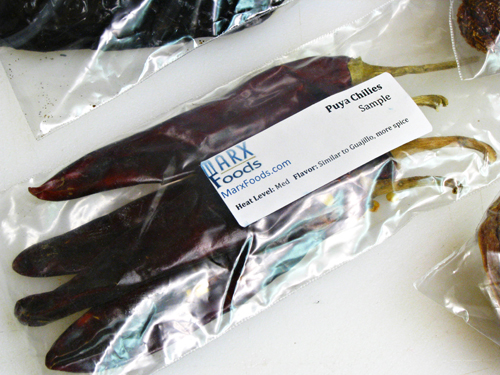 I got started thinking on what I would make. While my thoughts kept turning to sauces, I decided to check out their website and learn as much as I could about the chilies I was sent. I learned quite a bit – everything from recommendations for the various chilies to how to grind them and make my own chili powder. As I learned about them, it dawned on me: make your black bean burger. Of course, I’ve never used dried chilies with them. Well, dried chilies were used I suppose in my store-bought chili powder, but that’s it. I was eager to give it a try and decided to go with the Puya Chilies, which have a medium heat level – I really wanted something to give the burgers a little bit of a kick. You could also use this recipe with other chilies. 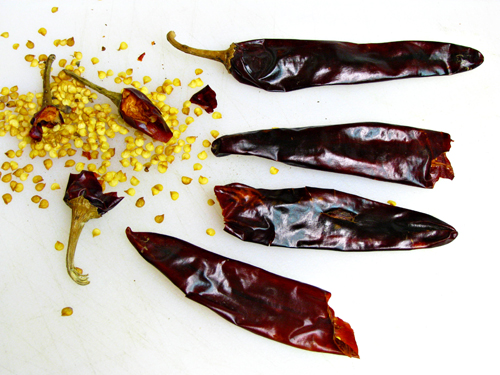 On the Marx Food website, I learned about reconstituting dried chilies and making them into a chili paste. I felt that the paste would be a good way to go since it would keep moisture in the black bean burgers, which can have the tendency to be dry, if you aren’t careful (I’ve made my fair share of dry ones, but this isn’t it). The Max Food website does have a good tutorial on making your own chili paste, so be sure to check that out, but I also wanted to share my photos through the process. In the photo above, you’ll see how I removed the tops of the dried chilies and dumped most of their seeds out. 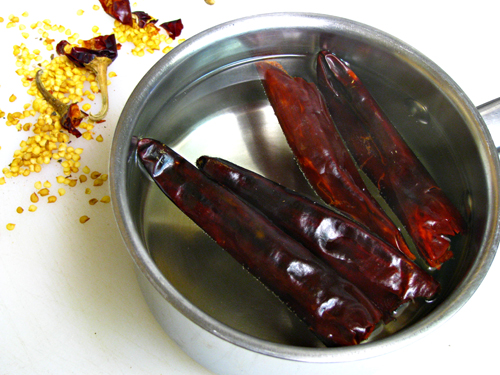 I soaked the chilies in boiling water for about 30 minutes. 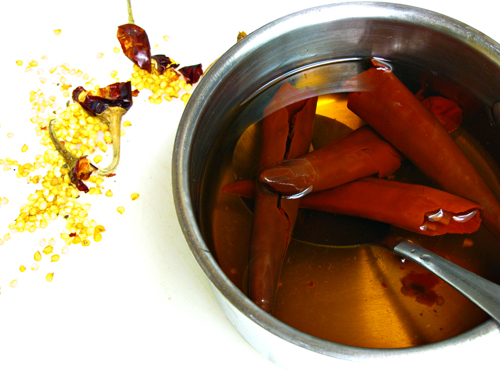 This is how they looked after soaking, but before removing them from the water. 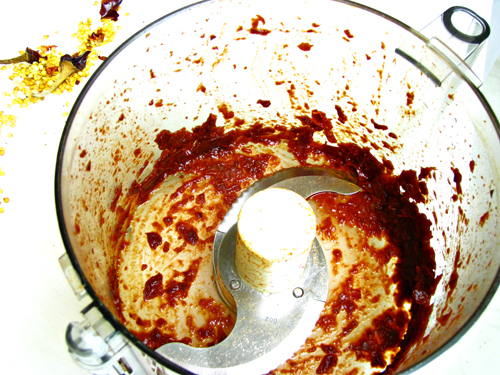 I pulsed them in my food processor until they were all broken up and as smooth as I could get them. This was just 4 of the chilies, so as you can see, there wasn’t lot, but it was enough for 12 burgers (2 batches). 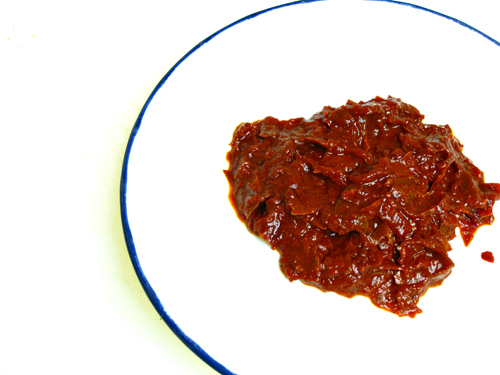 Here’s my Puya chili paste after I removed it from the food processor. I love that color. 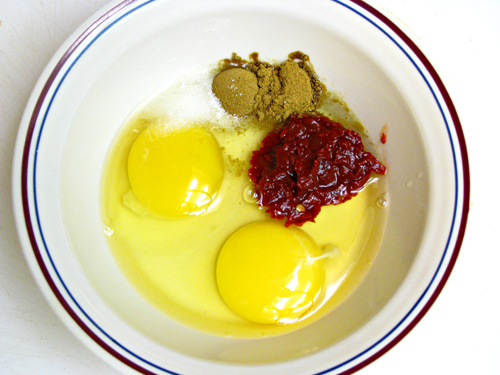 In a bowl, I combined 2 eggs, 2 tablespoons of the chili paste, 1/2 teaspoon of sea salt, and 1 1/2 teaspoon of ground cumin. The Puya chilies are a medium chili, so if you don’t like things a bit spicy, you may want to consider using just 1 tablespoon. Alternatively, if you like things much spicier, you could use a hotter chili in this recipe, discard less of the seeds, or just even more of the Puya chili paste. The 2 tablespoons was a good amount for us. 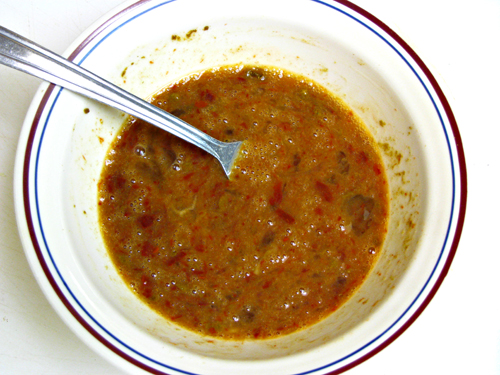 Here it is after I mixed it all together. 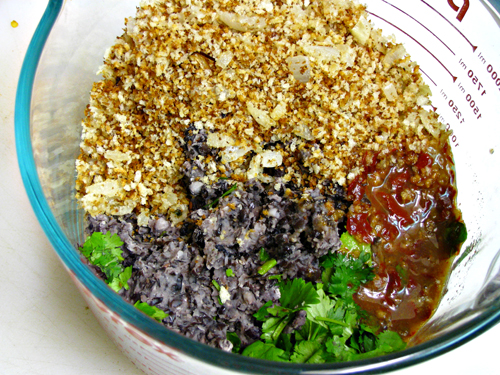 While my chilies were soaking previously, I had sauteed 1/2 of a diced large onion in a couple teaspoons of olive oil. When the onion almost done (tender), I tossed in 1 cups of panko breadcrumbs and toasted them in the pan with the onions until the breadcrumbs were nice and golden brown. I love this mixture and when I cook it, the smell reminds me of making Thanksgiving stuffing.

I had cooked my black beans from dry beans earlier in the day. What I do is usually soak and then cook 1 pound of dry beans, which gives me enough to do a double batch of these burgers – enough for dinner, plus leftovers. But you can easily use canned black beans, if you prefer. I added 2 1/2 cups of the beans into my food processor. I pulsed the beans until they were mashed up and put them in a mixing bowl. Then, I added in the onion/panko mixture, about 1/3 chopped cilantro, and the bowl of egg/chili paste mixture. 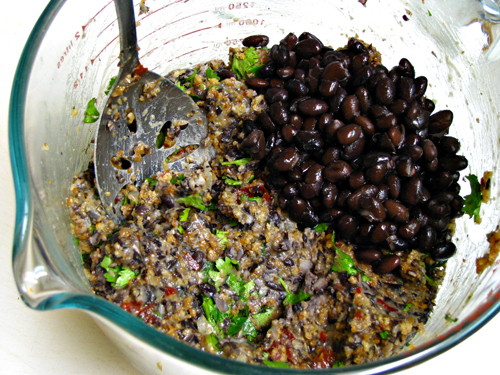 All of this was mixed up well and then I added in another 1/2 cup of cooked black beans. I don’t want the burgers to be just the mashed beans, so I add these whole beans to add a bit more texture and interest to the burgers. Speaking of mashed beans, when Courtney (age 13) was eating these, she said they were like a “tostada on a bun”.

After everything was mixed up, I formed patties, such as the one you see above. My recipe will make about 6 spicy black bean burgers. I heated a bit of oil in a frying pan and cooked them in the oil, until each side was nicely browned and toasty. 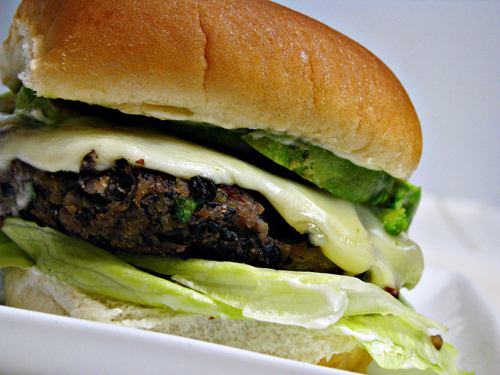 You can top your spicy black bean burger almost any way you wish – my favorite way is with a little bit of light mayo, cheese (I used Monterey Jack this time), lettuce, tomato, and sliced avocado. So good! The burgers are moist on the inside, and have a nice crust on the outside. The chilies gave it just enough of a spicy touch for us, but it wasn’t too crazy-hot.

I hope you enjoyed hearing about my 2nd experience with dried chilies and I hope you enjoy my spicy black bean burgers. It was a lot of fun and I’m excited to participate in the Blogger Chile Recipe Contest by Marx Foods!

Remove the tops from your Puya Chilies and shake out seeds from the chili. Place chilies in a bowl and pour boiling water over the chilies. Press down on them with a spoon to submerge them. Let sit in water for 30 minutes. After chilies are done soaking, remove them from the water with a slotted spoon and place in a food processor. Discard soaking water. Pulse chilies in the processor until pureed to make your complete chili paste.

Heat olive oil in a frying pan over medium heat and saute onions until close to tender. Add breadcrumbs and toast them with the onions until golden brown. Remove from heat and allow to cool.

In food processor, pulse 2 1/2 cups of the black beans until mashed together enough so that they will hold together. Placed mashed black beans into a mixing bowl.

In a small bowl, combine the eggs, salt, cumin, and 2 tablespoons of chili paste. Add this mixture, plus the breadcrumbs and the cilantro, to the mashed black beans. Stir to combine well. Add remaining 1/2 cup of black beans to this mixture and combine.

Form 6 patties with mixture. Heat a couple tablespoons of oil in a frying pan over medium heat. Fry patties until each side is golden brown and crispy.

Serve patties on sandwich rolls or hamburger buns with your choice of condiments and toppings.

NOTE: I cook 1 lb of dry beans when I make my black bean burgers, which gives me enough to do a double batch – enough for dinner, plus leftovers. But you can easily use canned black beans, if you prefer. Just use two 15oz cans, and drain and rinse them before use in the recipe.