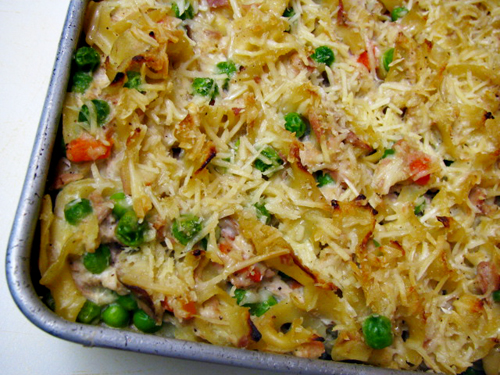 I’ve been making tuna noodle casserole for as long as I have been married (21 years now) and most of the time, it involved cream of mushroom soup and/or Velveeta. I grew up having it with the cream of mushroom soup, but it never included the Velveeta, and it always had crushed saltine crackers on top. My husband, on the other hand, grew up and loved a similar version, but it has a loaf of Velveeta cheese mixed in, minus the crushed saltine crackers. This became the version I started making for most of our marriage and that my kids would request regularly.

That is until I decided that I really didn’t want to make it with canned soup anymore, which got started with my wish to cook from scratch more often. And I got to wondering if other home cooks made Tuna Noodle Casserole from scratch? Without canned soup? 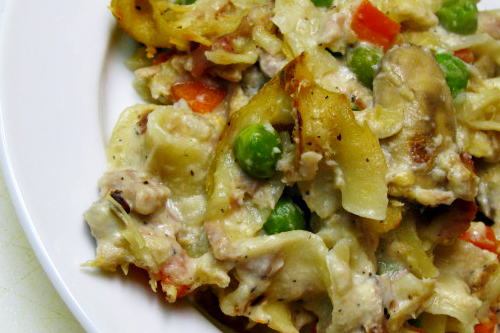 I got started searching and I realized that there was tons of recipes out there for homemade Tuna Noodle Casserole. And I found one that sounded perfect for us. In fact, so perfect that my family now request this version and doesn’t even want the other one.

This recipe comes from the January 2010 issue of Cooking Light Magazine, which just happens to be my favorite cooking magazine. The recipe you see below has a few minor changes from the original. One was that I added about double the carrots and more peas. I also don’t have a broiler, so I baked it in the oven. Other than that, I follow the other ingredients and instructions. We absolutely love the flavor that the Dijon mustard and the Parmesan cheese give this – so much that I’m craving it again as I am typing this up!

I also wanted to note that I double or triple the recipe below for our family. I like to cook big batches that will not only feed us the first night, but will also give us leftovers for the next day (or two) – plus the bags of egg noodles at my store are 12 oz each, so it just makes it easier for me. 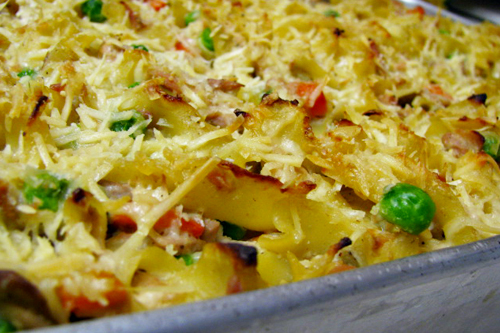