Disclosure: I created my healthy Tropical Chia Pudding Bites as part of an #Outshine  sponsored post for Socialstars by Crowdtap. 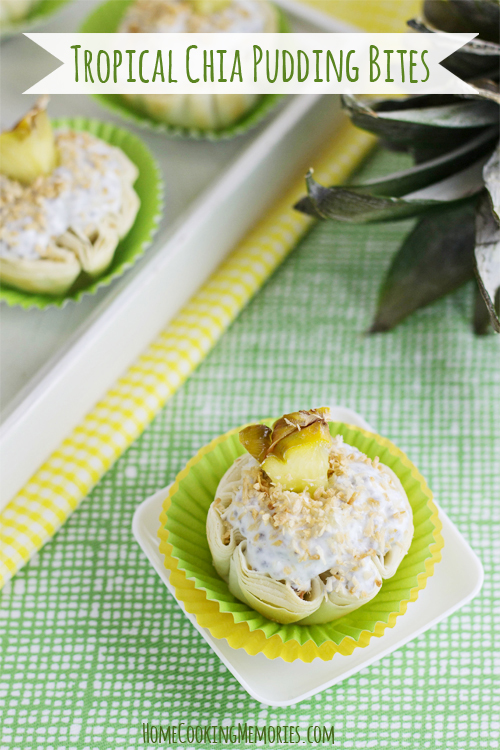 If you’ve ever been to Vegas in the Summer, you know it gets hot. But even if it’s cooler, like right now, I almost always tend to be a bit warmer than everyone else around me. That means my ceiling fan, black flip flops, and a cold drink are making appearances…even in February. 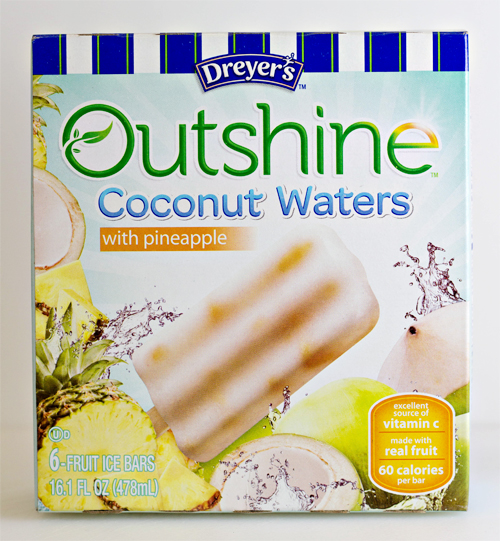 Last summer, when it was the hottest it could be, I got hooked on Dreyer’s Outshine Bars. Earlier in the year, I had tried pineapple coconut water and loved it, so when I saw the Outshine Coconut Waters with Pineapple Frozen Bars, I didn’t hesitate to buy a box. During the summer, they were the perfect way to cool down, but even after the summer ended, I’ve been keeping a box in my freezer because of how much I liked them. 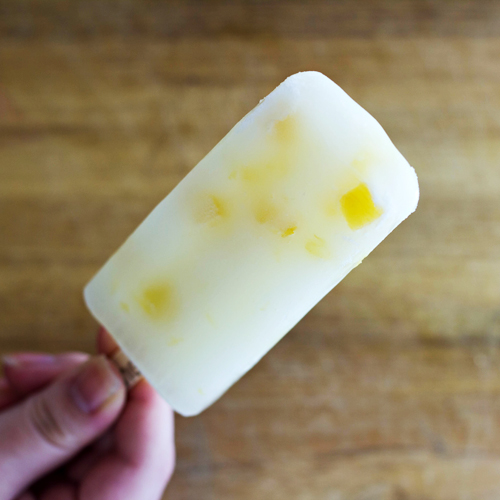 One of the best things about them is that they are only 60 calories per bar, so they fit in nicely with my healthy eating goals. Plus,  I love how they have bit of real fruit all throughout.  Other than the Outshine Coconut Waters with Pineapple, I’m also a fan of the Outshine Strawberry Bars. Those are only 70 calories and they are seriously bursting with strawberry goodness. 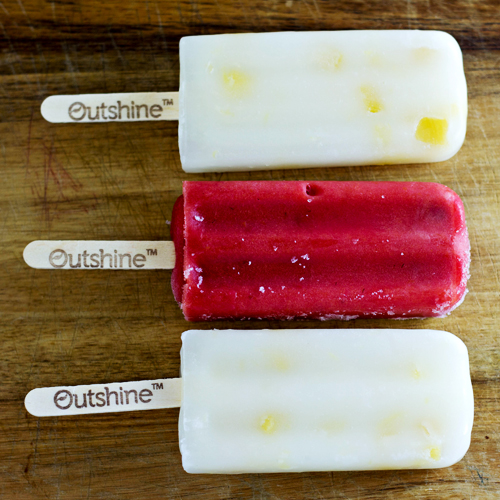 While I usually enjoy Outshine bars right on the stick, I’ve also had some fun doing a few things you might not expect. For example, we love to make green smoothies in our house and adding an Outshine bar to them is a great way to add flavor and a bit of sweetness. Another way I’ve used Outshine bars is to use them to make a chia pudding with the use of chia seeds.

So, here’s the thing about chia seeds. When I first saw them, I thought “ewwww”. People eat those? They get bigger and swell, and become gel-like, I was a wee bit grossed out by them.

But I’ve really tried hard over the years to not be a puke about things. If other people are eating it, it must not have killed them, right? So I usually try to give *most* things a try at least once. I heard how chia seeds are super nutritious and figured that, even if I don’t like the way they look, I would give them as try at some point. And then I heard that they would naturally thicken liquids and I’ve seen them used in some recipes that actually looked quite amazing. So, I did it. I ate them and actually liked them. And I’m still living and breathing and able to share it with you all.

To make a healthy pudding, chia seeds can be combined with ingredients, such as milk, where they will absorb the liquid and thicken it. With Outshine Ice Bars, chia seeds, and a few other ingredients, I’ve made Tropical Chia Pudding Bites that are easy, healthy and delicious.

Tropical Chia Pudding Bites start with melting two Outshine Coconut Waters with Pineapple Frozen Fruit Bars. To do this, just set them in a glass or bowl on your kitchen counter until melted. If you are in a hurry, you could also melt them in a microwave for a few seconds. You don’t want to the mixture to get hot, so heat for a few seconds and then stir. Return for another few seconds, if needed. 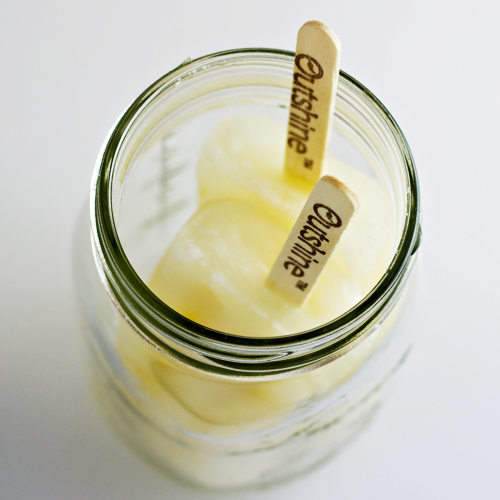 In a bowl with a hand mixer or in the bowl of a stand mixer, you’ll beat softened cream cheese and Greek yogurt together. Then, the melted Outshine bars are mixed in, as well as the chia seed. 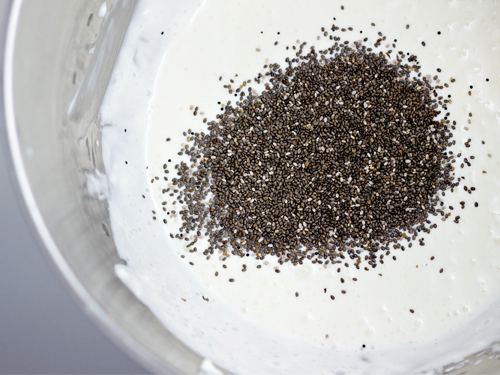 The mixture sits for approximately 1 hour, with occasional stirring during that time. After an hour, the mixture will be thick and pudding-like. 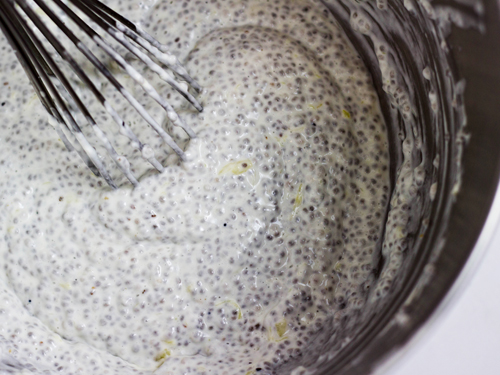 Place the chia pudding into a zipper-style plastic bag and cut a bit of one corner off of the bag. Squeeze the pudding into pre-made mini phyllo cups. 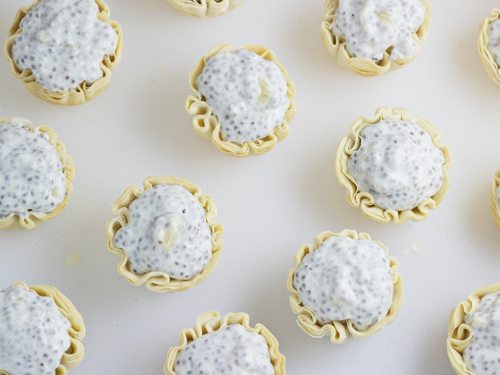 While chia pudding might taste great, I personally don’t think that it’s all that beautiful, so to me, some great garnishing touches is a must. I like to garnish with a sprinkle of toasted unsweetened coconut and a small triangle of pineapple. 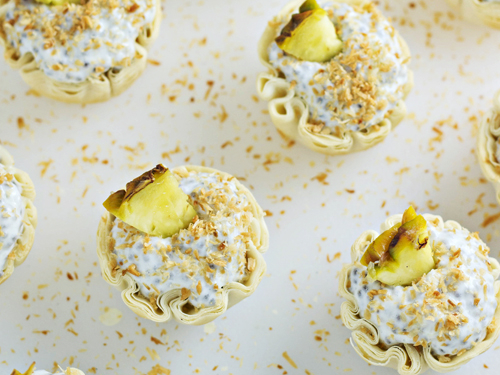 These would be great served at a party, but I like them just as a snack too. There is no-guilt involved, so you can easily enjoy a couple of them. Of course, while I made mine with the Coconut Waters with Pineapple, but you could easily substitute any of the other Outshine Bars to make different flavors of chia pudding. 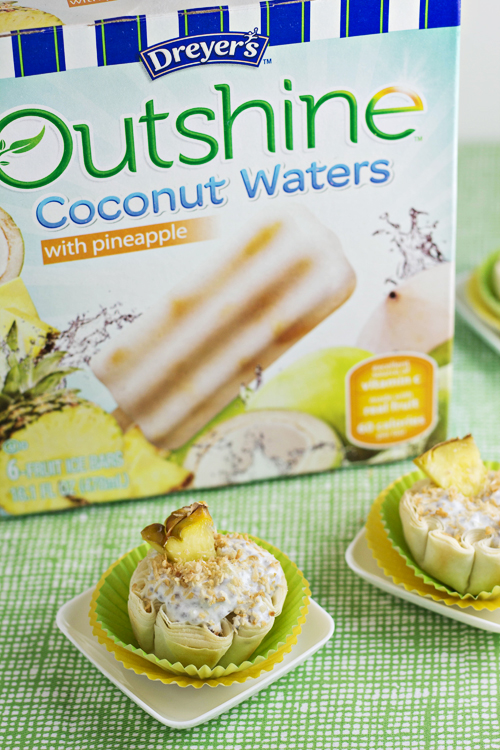 Here’s the complete recipe — save it to your ZipList recipe box, or feel free to print it. If you aren’t ready to use it yet, pin it to Pinterest for safe keeping. Now go forth…make Tropical Chia Pudding Bites and live to tell the tale of it.

Have you tried Outshine Frozen Bars? Which one is your favorite? 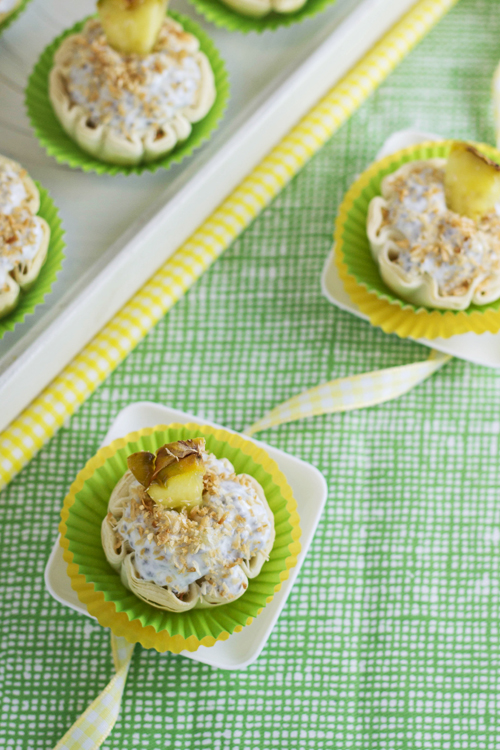