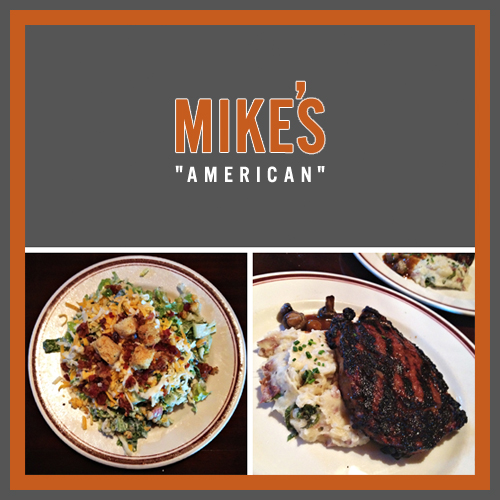 In May 2012, David and I took our second trip of the year to Virginia from Las Vegas. Just like the first time, it wasn’t a happy trip. In January/February I was there due to my Dad’s sudden death, but this time it was for my sister, who had been admitted to the hospital. We traveled over night and after long flights and layovers, hours at the hospital and an emotionally draining day, we checked in at our hotel, took showers and decided to get something to eat.

While we were both tired and something quick like a pizza or fast food seemed like the easy choice, it didn’t appeal to each of us very much. I wanted something different, something that would help distract me for an hour or two. I think David was thinking along the lines of a casual dining restaurant, like Applebee’s, but I had a different idea.

I had remembered that my Dad’s supervisor at the Holocaust Museum mentioned to me that she had ate at a restaurant called Mike’s American Grill the day my dad passed away. She thought it was ironic because not only was she dining at a restaurant just over the freeway where my Dad passed away (she didn’t know it at the time), but that it also had his name in the title.

I told David I wanted to try Mike’s American. I think he thought it was a bit crazy because we were so tired, but in an effort to make me happy, he agreed. That and guess what? There is no Applebee’s in Springfield, VA anyway. So there.

I did a quick search on my iPhone and realized it was only about 2 blocks away from our hotel. We took the short drive over and even though it was a bit early for dinner (4-5pm), the parking lot was fairly busy. I wondered if this might be a bad idea, as I certainly didn’t want to wait for an hour for a table. Luckily, there was virtually no wait and we were seated promptly.

The restaurant is a cool, multi-level restaurant. It’s a brick building, which fits in perfectly in Virginia. There is also touches of neon and the entire restaurant has a vintage baseball feel. I really loved the decor — barn stars are a favorite of mine and there was lots of them! I also liked that dining takes place on both floors. Our seat was on the second floor, which we accessed by climbing a beautiful staircase, but there was also an elevator available. Because our seat was on the 2nd floor, we had a great view of the entire restaurant.

Shortly after being seated, they brought a bread basket to the table which had some great little rolls called Ozzie Rolls. I could have easily ate 10 of those! 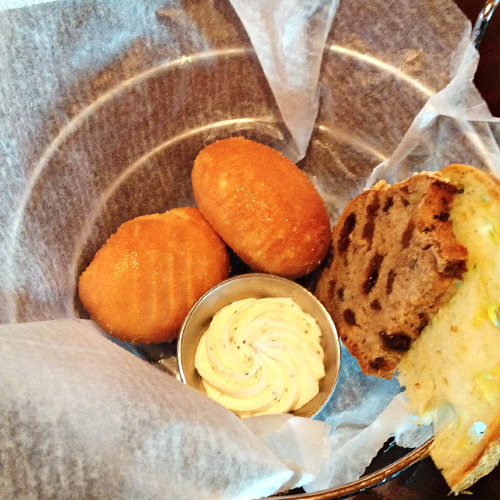 Sometimes we get an appetizer at restaurants and sometimes we don’t. But since we hadn’t ate all day, we were HUNGRY. So, we ordered Tex Mex Egg Rolls with Avocado Dipping Sauce, which were also fantastic. 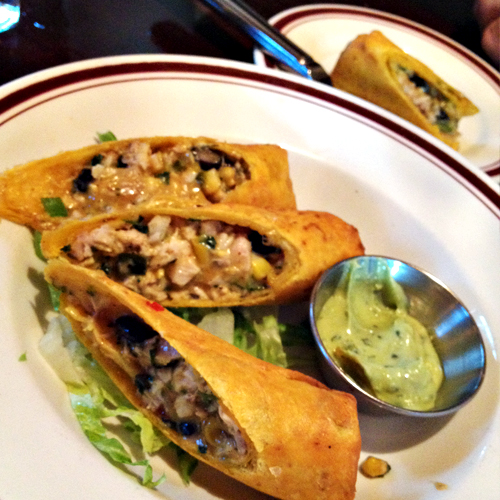 A choice of salad came with our entree, so both David and I picked the Chop House Salad With Bacon. It was topped with shredded Cheddar & Jack cheese, fresh grilled corn,  tomato & basil, with buttermilk herb dressing. I’m not sure I’ve had a chopped salad before and if I had, they didn’t leave an impression on me. But this? This was perfect and I’ve craved it ever since our visit. 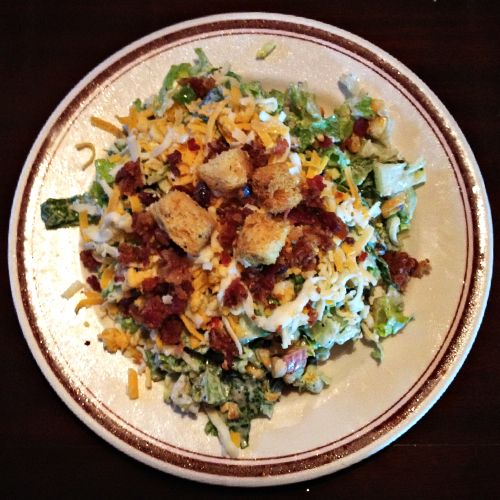 For our entree, we both chose the Drunken Ribeye. It is marinated in their Great American Pale Ale and rests on top of basil redskin mashed potatoes. Sauteed mushrooms were served on the side. The ribeye was SO amazing and it was one of the best steaks we’ve ever had. 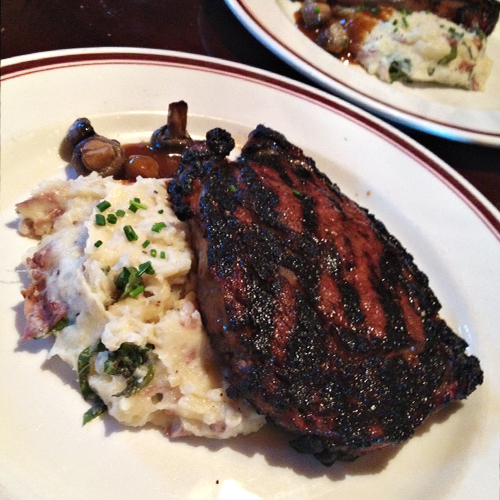 While having great food is one reason I would love to go back to Mike’s American Grill, there was one other aspect that must be mentioned: the service. To me it doesn’t matter how amazing your food is…if the service is bad, I won’t want to go back. Mike’s American Grill had the type of service I wish I could get in every restaurant. Not only was our server extremely friendly, but so was everyone else that we encountered.

Mike’s American Grill is located in one place…the location we were at in Springfield, VA. If you are visiting Washington DC, and perhaps staying outside of DC in Virginia, you should definitely stop in for a meal. You can find out more information about them here: Mike’s American Grill 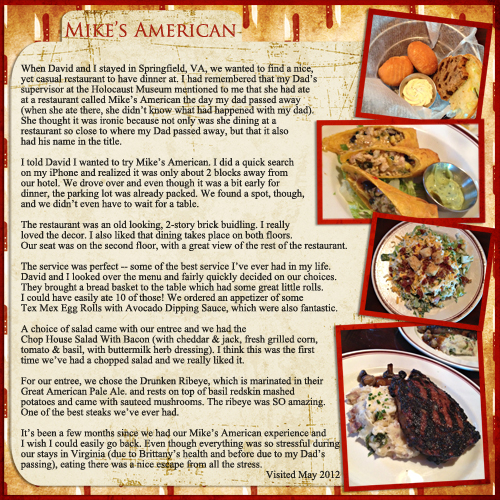 I created the digital scrapbooking layout above to preserve the memories of our restaurant experience at Mike’s American Grill. I used products available here: Let’s Eat Micro Kit