I’ll show you how you can make homemade lollipops for a fun Halloween treat — by using a mini muffin tin for your mold! 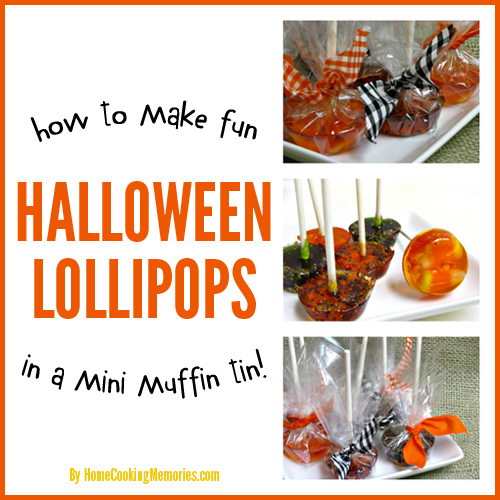 Since our science project on the candy stages, I’ve been wanting to make lollipops. I’ve never made them, but I had the idea to make them with flavored water – more specifically Clear American flavored sparkling water from Walmart. I wasn’t sure if it would work, but if it would, the flavored water would be the flavoring and there wouldn’t be a need for adding (or buying) extra flavors. I’ll give you a spoiler: it did work….deliciously! 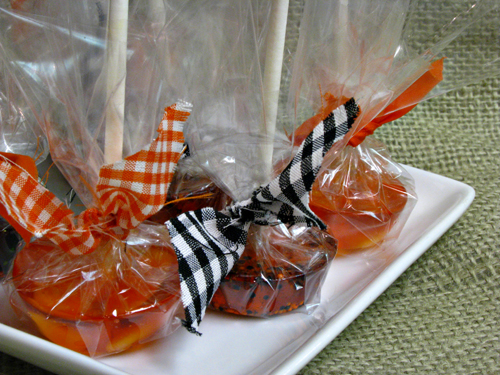 Since I was making Halloween lollipops, I thought carefully about the flavors I would buy. I ended up buying Mandarin Orange (since pumpkins and the holiday is full of “orange” colors), Fuji Apple Pear (Autumn flavors), and Apple Raspberry (thinking apples and Autumn here again – wanted another variation). David gasped when he saw that they had a Pineapple Coconut flavor…you know him with Coconut stuff. We got that one just for him. The main issue was finding lollipop molds. Walmart and Michael’s didn’t carry molds for hard candies (only chocolate candies). At first, I figured that I would have to free form them, similar to this post here: Wonky Homemade Lollipops. But, I kept thinking of what I had in my kitchen that was small enough to be used for candy molds. Then, I got an idea! I could use my mini muffin tins! Yeah!

It was now time to get started! To make the lollipops, you will need 1 cup of sugar, 1/3 cup of light corn syrup, and 1/2 cup of Clear American Flavored Sparkling Water of your choice. 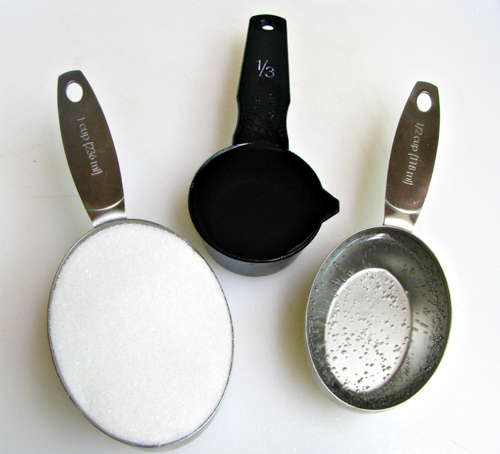 These three things are combined in a heavy-bottomed pot. You heat them over medium-high heat, just until the sugar is dissolved. 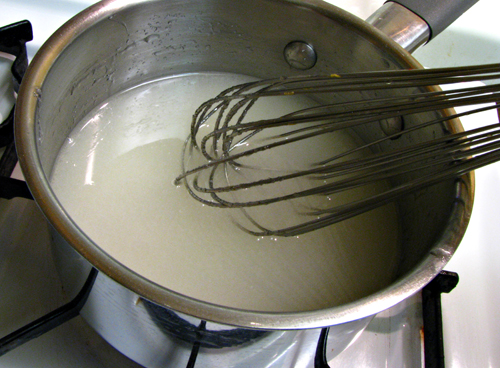 After the sugar is dissolved, clip your candy thermometer to the side of your pan and heat the mixture over medium-high heat – without stirring – until it reaches 300 degrees F, also known at the hard crack stage. While my sugar mixture was heating, I generously sprayed my mini muffin tin with cooking spray……… 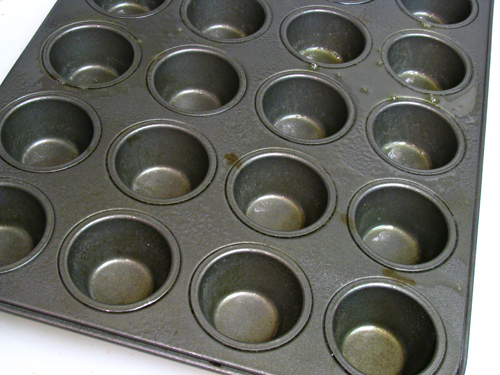 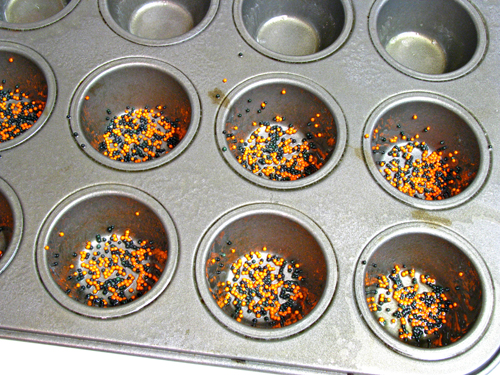 I set my pan aside and waited for the sugar mixture to heat. It’s very important to keep a close watch; you don’t want to go over the 300 degrees F. When it reaches this point, turn off the heat and remove it from the burner. 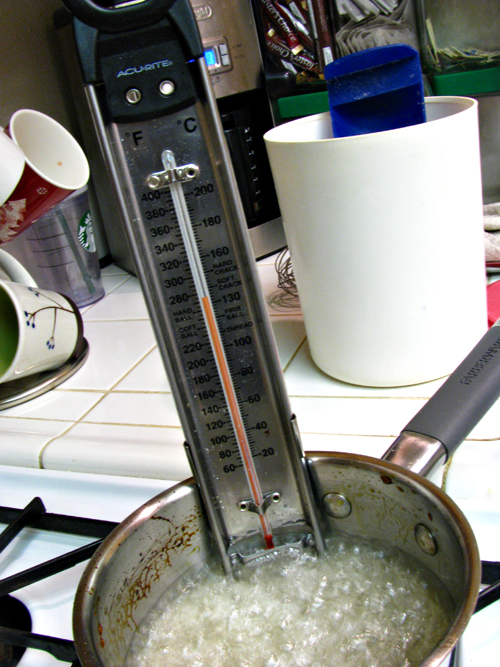 Working quickly and carefully, stir in a few drop of food coloring to achieve the look you want. I decided to go with the following color/flavor combos:

You definitely don’t have to follow what I did – you can mix it up and use unexpected colors with unexpected flavors – it’s Halloween, so have fun! Get creative and do what you want to do. 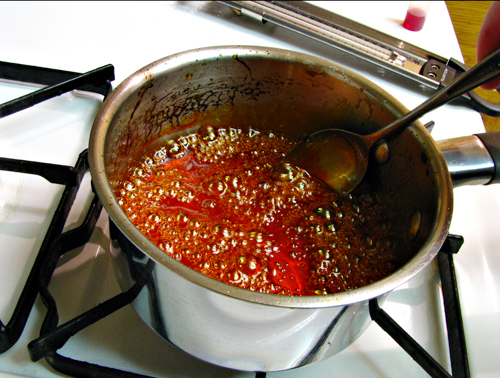 Still working quickly (and carefully), I spooned about 2 teaspoons or so of the hot lollipop mixture into each mini muffin tin. 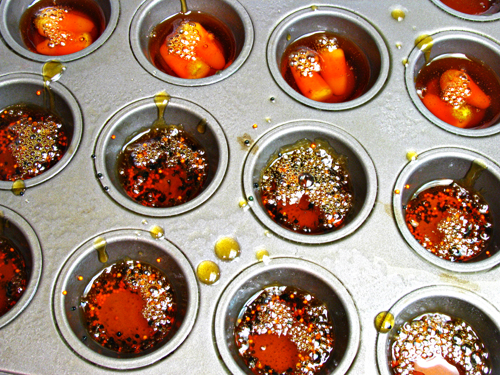 Then, I added lollipop sticks to the middle of each muffin tin. When you first do this, the sticks probably won’t stand up well – it’s okay. Let the sticks fall and rest. Stay nearby because the mixture does start to cool quickly. As the mixture is cooling and thickening, keep attempting to stand the sticks upright. You’ll start to notice that they will start standing up as the mixture has cooled and thickened enough. 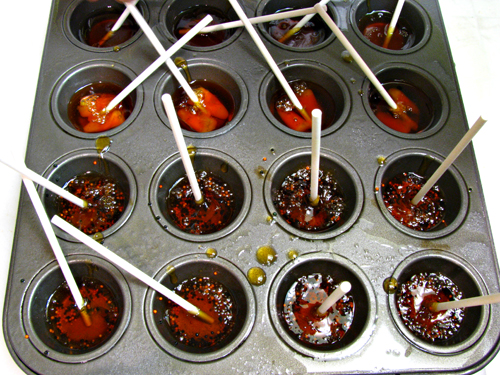 And eventually, all the sticks with stand upright. 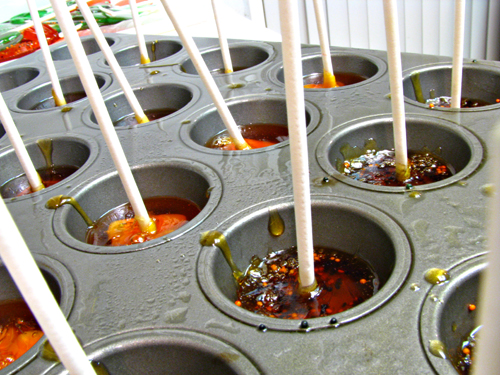 After the lollipop mixture in each muffin tin is cool and hardened, you can start removing them from the tin. I found the best way to wiggle them free is to grasp the stick near the bottom, closest to the candy. Move the stick from side to side, top to bottom, and it pop free of the tin. 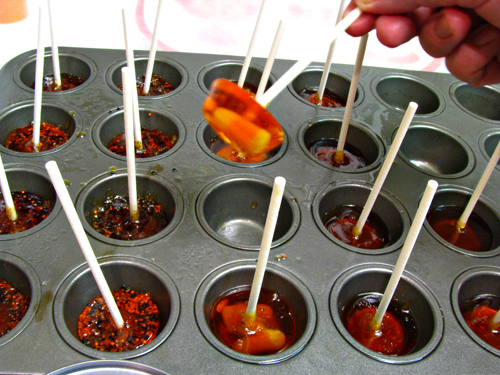 And, just like that, you have homemade lollipops made with flavored sparkling water! 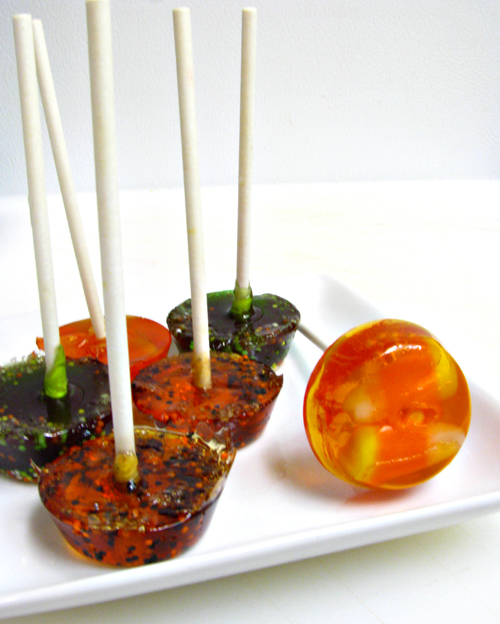 And, yes, they do taste like the Clear American flavored water when you are done! Well, a sweeter version of the water, but you get the idea. They are super yummy! One of the things I like the best about making these was that I didn’t have to buy traditional candy flavorings (so I saved money), plus, I didn’t have to use only typical extracts like vanilla and peppermint. I think Fuji Apple Pear would have been hard to achieve, but it was really easy to get that flavor with the water I used. 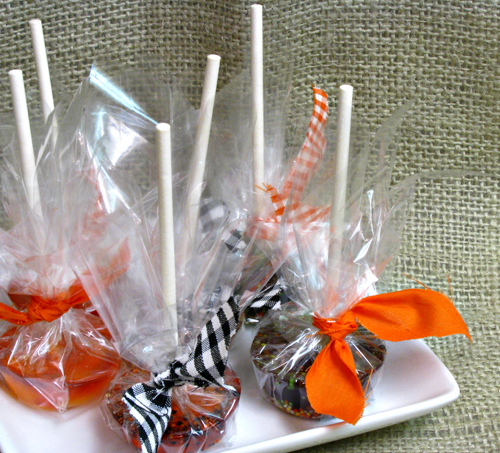 I really love how these ended up looking. I wrapped the lollipops with a square piece of cellophane (which I cut from a larger roll of transparent cellophane) and tied it closed with a strip of fabric. They stand up cute on a plate or serving tray and would look great on a Halloween party table. I can’t wait to make these again – I’m already planning on the Christmas ones I will make. 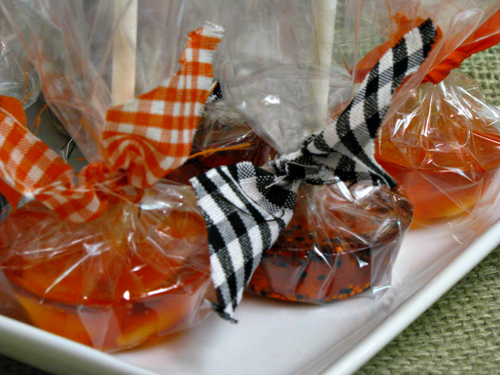 Oh, and the candy corn ones look particularly great when stood upside down in a display. 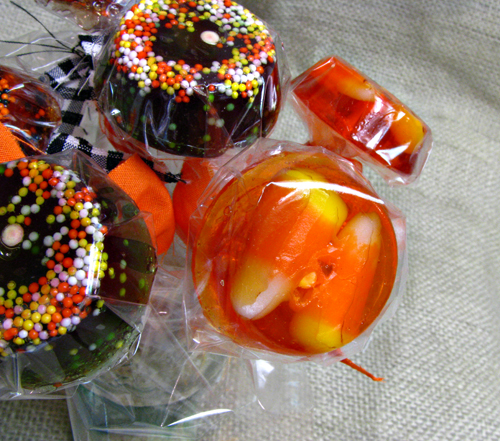 Disclosure: This #cBias shop has been compensated as part of a social shopper insights study for Collective Bias, which is a vendor for Cott Beverages Inc., the manufacturer of Clear American® brand beverages. This idea, and all thoughts and opinions, are 100% my own.