I’m a bit late to the #reverb10 initiative, but rather than say I will make time to do it (perfectly) next year (my typical response), I thought why not just start and finish out the last few days of it?

The #reverb 10 prompt for December 26 is titled “Soul Food” and it said:

What did you eat this year that you will never forget? What went into your mouth & touched your soul? 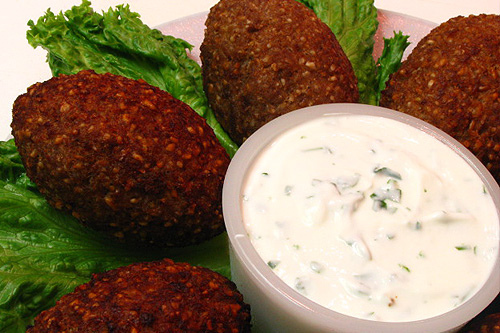 Without a doubt the food that I will never forget is kibbeh. This ultimately sums up my year as a year that I took chances with even more foods, tried more things, and wasn’t so afraid.

I have thought many time this year, before trying something new: “this won’t kill me”. Those 4 words might seem silly, but it’s the way I tell myself that I need to calm down, chill out, and try something new. IT WON’T KILL ME. People eat this all the time. Worst case, if I don’t like something, I can spit it out. If I don’t want to disgust those around me, I can swallow it and I WILL LIVE.

Kibbeh isn’t that far out there. It’s not like I ate an insect or rare delicacy from a foreign country. But for me, it was:

So, it was a entirely unknown.

I ate it and it was delicious. And then I made it – successfully – for Round Two of Project Food Blog. It was kibbeh that confirmed for me that trying new foods is very good for me. That it is good to venture beyond my comfort zone. That trying new things brings me new experiences, new stories to share, and does the same for my family.